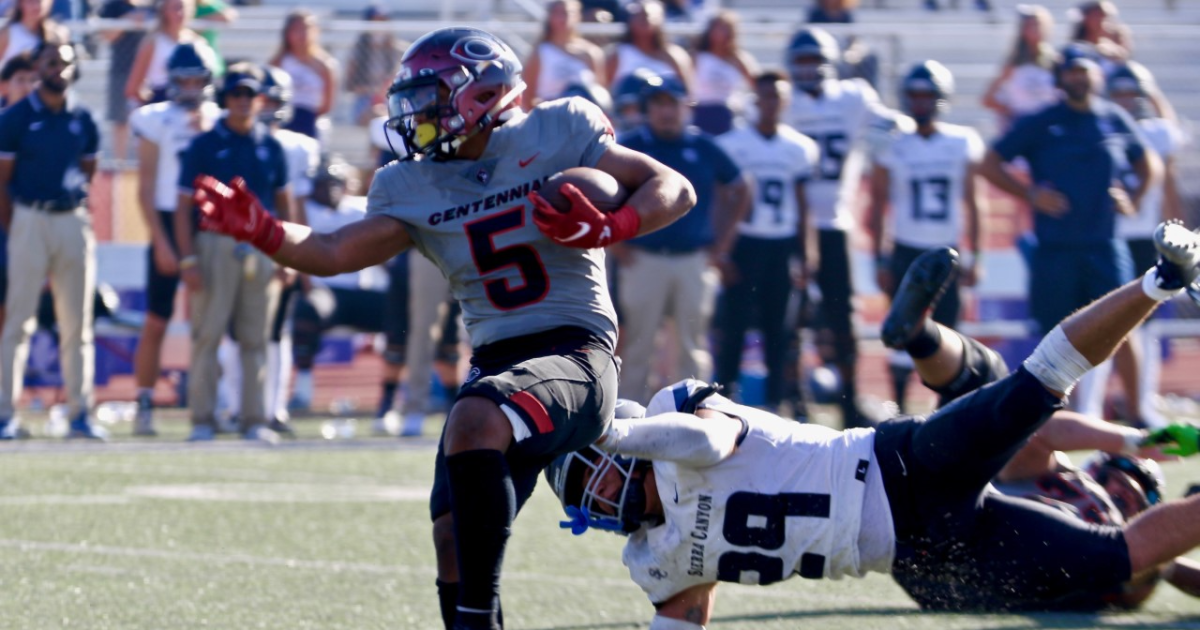 Two of the most talented offenses in Southern California were on the field Saturday in the showcase game of the 2021 Honor Bowl at Cathedral Catholic High in San Diego, but for much of the 48 minutes it was the defenses that stole the show.

There were more punts than spectacular plays, but Corona Centennial pulled away in the third quarter to grind out a workmanlike 35-14 victory over Chatsworth Sierra Canyon and serve notice that it is still one of the elite programs in the state.

Using a no-huddle offense to prevent its opponent from rotating personnel every play, Centennial (2-0) abandoned its vaunted short passing attack to seize control the old-fashioned way — by running the football between the tackles.

Jayson Cortes shouldered the load with well over 200 yards rushing and two touchdowns — the second on a one-yard plunge after he broke loose for a 55-yard gain midway through the fourth quarter. Cornell Hatcher ran for a 59-yard burst up the middle that gave the Huskies the lead for good, 21-14, with 5:03 left in the third quarter.

“We started off a little bit slow, but you have games like that,” said Cortes, who was awarded the most valuable player trophy. “The second half, we came out on fire and we wanted to pound the football. The linemen gave me the holes, and I did my job. There were lots of people doubting us at the start of the season, but that was motivation to show we’re still here.”

Sierra Canyon (2-1) marched 75 yards on its first drive, taking a 6-0 lead on Daniel Duran’s 15-yard pass to Dominic Arango-Serna, but the extra-point try was blocked. Centennial took a 7-6 lead early in the second quarter on a 19-yard scoring run by Cortes and the conversion by kicker Ayden Angeles.

Quarterback Carson Conklin faked a handoff and outran two defenders to the goal line to extend the Huskies’ lead to 14-6 at the 5:19 mark of the second quarter. Sierra Canyon pulled even before halftime on Carmel Crunk’s 21-yard interception return for a touchdown and Duran’s two-point toss to Caden Harman.

“We played well for a good chunk of the game, but neither of our starting cornerbacks (Jonah Lewis Jr. and D’Shawn Jones) played, and that forced Jason Jones and Darryl West to play both ways and that hurt us,” Sierra Canyon coach Jon Ellinghouse said. “We’ve got to run the ball to be successful, and we couldn’t do it consistently enough. We let this one slip away, but we have another big game against Anaheim Servite next week.”

Though both teams boast numerous Division I commits, Centennial coach Matt Logan acknowledged the rare underdog role might have inspired his players.

“The general plan is to run lot anyways, but we had some plays in the passing game that didn’t click,” Logan said. “We made a ton of mistakes, but we’re a young team and we know there’s room for improvement.”

The Honor Bowl, organized 10 years ago to recognize the U.S. military and raise funds for service vehicles and service dogs, was canceled last year because of COVID-19.

Domani Jackson out for season

USC-bound cornerback Domani Jackson of Santa Ana Mater Dei, the No. 1 senior college prospect in California, will miss the rest of the season after an injury suffered in the season opener two weeks ago against Texas Duncanville, the school announced Saturday.