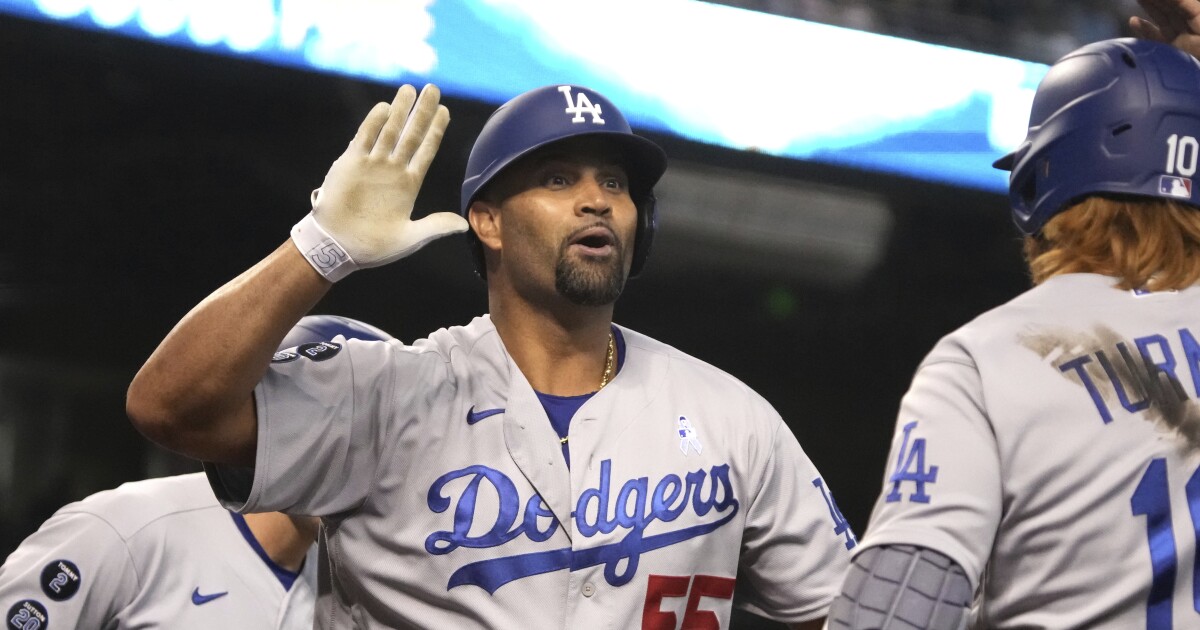 Fans want Albert Pujols back in St. Louis for over-40 reunion

Joe Schwarz came of age as a St. Louis Cardinals fan while Albert Pujols was mashing his way to three National League most valuable player awards and leading the team to two World Series titles from 2001-2011.

Though Gary Gaetti was his first “Cardinals crush,” as he calls it — Schwarz dressed up as the third baseman for Halloween as a first-grader in 1996 — and he was riveted by Mark McGwire’s home run chase in 1998, Pujols vaulted to the top of his favorites list after the slugger’s breakout 37-homer, 130-RBI season in 2001.

Schwarz, now a 30-year-old pharmacist in the city, grew up going to 10-20 games a year. He accumulated five Pujols bobblehead dolls, several autographed balls and a pair of signed, game-used batting gloves from his first MVP season in 2005.

“Albert was as close to a god in St. Louis as you could be without surpassing Stan Musial,” Schwarz said, referring to the Hall of Famer whose statue is among those gracing the entrance to Busch Stadium. “No matter where you were in the world, you would stop and watch him bat.”

Schwarz was so disillusioned when Pujols left St. Louis at the peak of his career to sign a 10-year, $240-million deal with the Angels before the 2012 season that he doused the one Pujols jersey he owned with lighter fluid and torched it, the video of which was picked up by a local television station.

But Schwarz would love nothing more than to add to his Pujols bobblehead collection, purchase another Pujols No. 5 jersey and take his 3-year-old son to Busch Stadium to see Pujols play for the Cardinals in 2022.

Schwarz, like most Cardinals fans, has noticed how Pujols, 41, has rejuvenated his career with the Dodgers after being released by the Angels in May. He sees the clutch hits Pujols has delivered, the joy he’s playing with, the way he mentors teammates, the bear hugs and positive vibes he brings to the dugout.

The Cardinals could use a right-handed bat off the bench and infusion of energy, and a large bucket of at-bats would open up if the NL adopts the designated hitter next season.

With Molina and Wainwright, the only remaining links to the World Series-winning 2006 and 2011 teams, signed and most likely returning, there is a groundswell among fans for the Cardinals to get the band back together for a farewell tour in 2022.

The largest crowd of the season is expected in 45,538-seat Busch Stadium on Monday for the second (home) coming of Pujols, the surefire Hall of Famer who is now a fill-in first baseman and pinch-hitter for the Dodgers. He is not far removed from his first homecoming.

Pujols made his first appearance as a visiting player here with the Angels two summers ago, a three-day lovefest in which fans heaped so much adulation onto Pujols that it brought him to tears.

Molina stepped in front of home plate before each of Pujols’ 12 plate appearances, delaying the game so his former teammate could bask in lengthy standing ovations from sellout crowds. The stadium erupted when Pujols slammed a homer into the bullpen the second game.

“It’s going to go down as one of the best moments, one of the best weekends, of my career,” Pujols said last week. “Just going back, the way the fans embraced me and having the opportunity to share it with my family and friends, was really special.”

The recency of that June 2019 visit probably won’t curb the enthusiasm of the self-proclaimed “best fans in baseball” during this week’s four-game series between the Cardinals and Dodgers.

Few cities embrace their sports history and traditions more firmly than St. Louis, where Super Bowl winners such as Kurt Warner, World Series champions such as David Freese, NHL stars such as Brett Hull and even role players such as infielder Kolten Wong received rousing standing ovations when returning with other teams.

Few visiting players did more to warrant a hero’s welcome than Pujols, whose decade of dominance in the batter’s box and extensive work in the community thrust him into the pantheon of Cardinals greats along with Musial, Bob Gibson, Lou Brock and Ozzie Smith.

“I think this place will be jumping like it hasn’t since the home opener this year, when [Nolan] Arenado hit a huge eighth-inning home run to win it,” said Bernie Miklasz, who spent three decades as a St. Louis Post-Dispatch sports columnist and now hosts an afternoon radio show. “It will be electric when he comes here.”

Busch Stadium has lacked its usual buzz this season, the combination of a not-so-dynamic team hovering around .500 and on the outskirts of the NL wild-card race and a summer surge of the coronavirus suppressing attendance and enthusiasm.

But Joe Strohm, the team’s vice president of ticket sales, said Monday’s Labor Day crowd will top the season-high of 41,369 for the July 22 game against the Chicago Cubs, and a special $5.55 ticket offer, which reflects Pujols’ jersey number in St. Louis, should push crowds to the 35,000-range for the rest of the series.

“When he signed with the Dodgers, this became a series you circle with a Sharpie and say, ‘Well, not only is it the Dodgers, it’s the Dodgers with Albert Pujols,’” said Randy Karraker, 59, a lifelong Cardinals fan who co-hosts a morning sports radio show. “So, there’s a significant interest in that.”

The desire of Dodgers manager Dave Roberts to field his best lineup every night as his team battles the San Francisco Giants for the NL West title has meant more of Max Muncy and less of Pujols at first base.

There is no guarantee Pujols will start any of the games in St. Louis, though he might against left-handers J.A. Happ on Tuesday and Kwang Hyun-Kim on Thursday. But Cardinals fans will flock to Busch Stadium because it could be the last chance they get to see Pujols play there.

“This has always been a nostalgic-rich franchise with a very sentimental fan base,” Miklasz said. “His return in 2019 was like a Pujols festival. If there was any lingering resentment over him leaving, it was washed away that weekend.”

Pujols is nearing the end of his 21st season and is a full decade removed from the slugger who terrorized opposing pitchers to the tune of a .328 average, 1.037 on-base-plus-slugging percentage, 445 homers and 1,329 RBIs in his first 11 years.

Though he hit home runs Nos. 500 and 600 and collected his 3,000th hit and 2,000th RBI with the Angels, a series of lower-body injuries and age sapped him of his prodigious power, and his production plummeted.

Pujols hit .256 with a .758 OPS and averaged 24 homers and 85 RBIs in nine full seasons with the Angels. His only trip to the playoffs resulted in a three-game sweep at the hands of the Kansas City Royals in 2014.

“I got over him leaving once I realized we had seen his better years,” Schwarz said. “We got arguably the best right-handed hitter in major league history for $100 million plus his pre-arbitration years. The Angels, for $240 million, got an aging, injury-prone hitter who was a shell of himself.”

That didn’t stop the Cardinals from pursuing Pujols when the Angels released him. But with six-time All-Star and three-time Gold Glove winner Paul Goldschmidt entrenched at first base, there weren’t enough at-bats to offer Pujols.

“We gave it consideration,” said John Mozeliak, the Cardinals’ president of baseball operations. “The biggest problem for us was how to get him playing time. With Goldy at first base, you’re pretty limited there, and we play a very limited DH schedule. Clearly, I understand it would have been a nice story, but I don’t know how fair it would have been to either side.”

Mozeliak had no interest in fueling speculation about a Pujols reunion in 2022.

“That’s very presumptuous on many parts, so I’m not even going to engage in that,” he said. “I mean, one player [Wainwright] is not even re-signed, one is currently playing for another club … ”

The Pujols-Molina-Wainwright 2022 farewell tour narrative is more fan- and media-driven at this point, but it clearly exists. Of 1,397 respondents to a Twitter poll Schwarz conducted last week asking if the Cardinals should sign Pujols for one more year if the NL adopts the DH, 72% said yes and 27.6% said no.

But the debate in St. Louis over whether the Cardinals should sign Pujols includes one rather large assumption: that Pujols wants to play in 2022.

The chances of Pujols playing beyond this season appeared remote after he was released by the Angels with a .198 average, .622 OPS, five homers and 12 RBIs in 24 games. A .258 average, .763 OPS, 10 homers and 33 RBIs in 66 games with the Dodgers has breathed some life into a possible return.

“I’ll make that decision whenever I’m done with the season,” Pujols said. “I feel good. I’m strong. Hopefully I finish strong, healthy and help this ballclub to win.”

Pujols has accomplished just about everything in this game, but with 677 homers, which ranks him fifth on baseball’s all-time list, his motivation to play in 2022 might hinge on his desire to join Barry Bonds (762), Hank Aaron (755) and Babe Ruth (714) in baseball’s exclusive 700-homer club.

“I think he’s gonna push for 700 really hard,” said Allen Medwick, a 44-year-old fan from Tulsa who tapes a weekly Cardinals podcast called “Meet Me at Musial,” with Daniel Shoptaw, 46, of Russellville, Ark.

Pujols wouldn’t be a high priority for the Cardinals, who are expected to pursue a free-agent shortstop such as Corey Seager or Trevor Story. They might need to find at-bats for top prospect Nolan Gorman, a left-handed-hitting infielder who at age 21 has 11 homers and 27 RBIs in his first 43 games for triple-A Springfield.

A reunion could hinge on the role Pujols is willing to accept and if the Cardinals believe Pujols can help them win.

“I don’t think fans would be all that excited about him coming in as the everyday DH or an everyday player,” Shoptaw said. “But if he accepts a role against left-handers, like he’s done with the Dodgers, I think a lot of people would like that, especially with Yadi and Wainwright coming back.

“If those three could walk off at the end of September next year, or ideally in October, together, kind of arm in arm, I mean, that’s how you script it.”

If there is no Hollywood ending in St. Louis, or no 2022 season for Pujols, he will walk out of Busch Stadium Thursday for the last time as a player, the magnitude of the moment too difficult for Pujols to wrap his massive arms around.

“I really don’t think about it — I let the moment play — and wherever that moment goes, just try to enjoy it and embrace it however I can,” Pujols said of his possible final series in St. Louis.

“When you anticipate something and it doesn’t go the way that you were thinking or planning, you’re always going to be disappointed. But when you just let things play out, it always plays better, way better than your expectation.”

Previous What to watch on TV: NFL football, Sept. 11, Meghan Markle
Next World News | 4 Indian-origin Persons Killed in US Floods