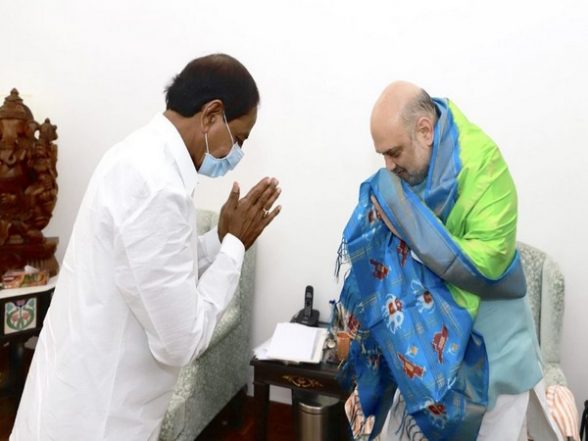 Hyderabad (Telangana) [India], September 5 (ANI): Telangana Chief Minister K Chandrashekar Rao called upon Union Home Minister Amit Shah in Delhi on Saturday and urged him to give approval for the IPS cadre review in the state.

In a letter submitted to the Home Minister, the Telangana Chief Minister said that “around two years after its formation, to meet the aspirations of the people of Telangana, the state government has undertaken a major revamp of its district administrative set up by reorganizing the then existing 10 districts into 33 districts for better administrative convenience, efficient delivery of welfare and developmental programmes to the people residing even in the remote areas.”

Rao said revising the existing zonal system under Article 371-D had become necessary following the formation of Telangana, as it is aimed at avoiding injustices done to employees and aspirants for government employment.

“The re-organized districts have been recognized by the government of India. The police administration has a special recognition unlike other departments in the said Notifications with 20 police districts and 9 police Commissionerates, in place of 9 police districts and 2 police Commissionerates existed earlier. On account of the new administrative set-up of Police Units, there is an imminent need to create new territorial posts in tune with the Notifications of the government of India to fulfill statutory responsibilities as per the Police Act, 1961,” the Chief Minister said

The Chief Minister noted that the state government has sent a proposal to the Ministry of Home Affairs for review of the IPS Cadre for Telangana dated June 24 for the creation of various Cadre posts in the State.

“In the scenario after re-organization, additional posts are required as territorial and critical posts as head of new districts, new zones and new multi-zones which are newly created. Hence, a bare minimum increase of (29) Senior Duty Posts, i.e from existing 76 to 105, with a resultant increase in total IPS cadre from 139 to that of 195, is being sought, as a special case, keeping in view the administrative requirement of the police department and for discharging responsibilities as per Police Act,” Rao noted.

He further said that at present these territorial units have no sanctioned Cadre posts. “It is, therefore, requested to treat the present IPS Cadre Review as an extraordinary case for approval. The requirement of additional posts is appended to this letter,” Rao added. (ANI)

Previous How Canada’s men are on verge of qualifying for World Cup
Next Three more deaths, 1485 cases of COVID-19 announced on Sunday