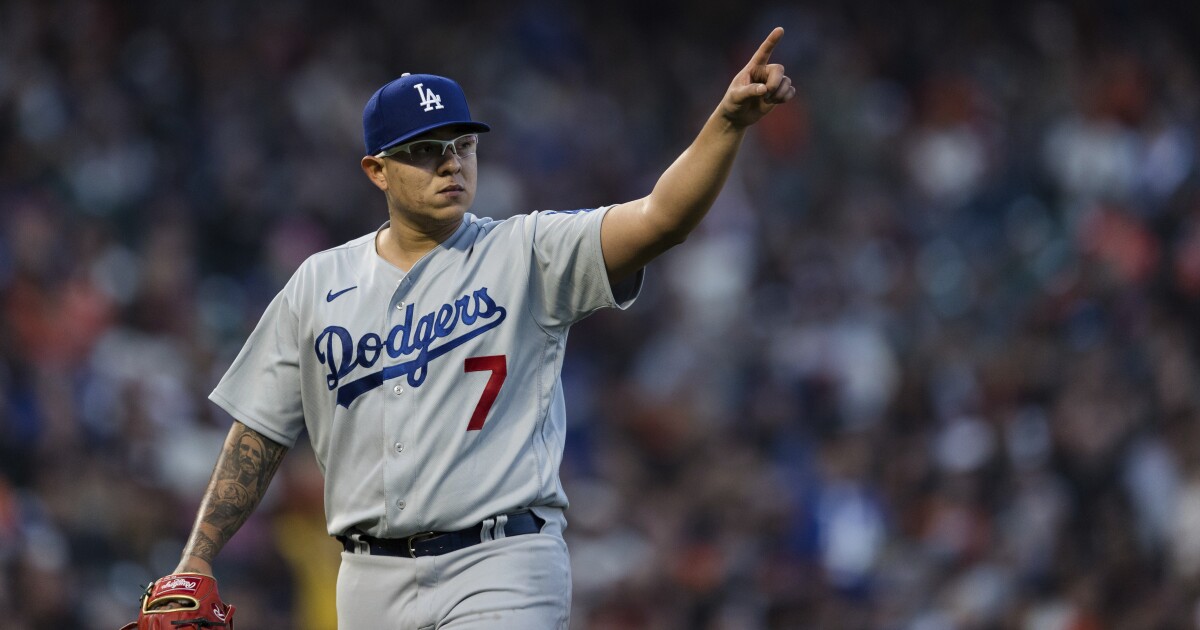 As agonizing as the Dodgers’ Friday loss to the San Francisco Giants was — and it doesn’t get much worse than losing to your rivals in 11 innings on a throwing error to drop out of first place in September — the remainder of the three-game series fell in the Dodgers’ favor for one reason: starting pitching.

The Dodgers had front-line starters lined up over the next two days at Oracle Park: major-league wins leader Julio Urías on Saturday followed Sunday by National League Cy Young Award candidate Walker Buehler. The Giants, meanwhile, didn’t have a starter scheduled for either game. Instead, they planned on deploying bullpen games.

On Saturday, the Dodgers’ advantage produced a bounce-back 6-1 win in a front of a sold-out crowd, moving them back into a tie with the Giants atop the NL West at 86-50. One team will emerge from the weekend in sole possession of first place by the end of Sunday’s series finale, which will serve as the season series tiebreaker after the clubs split their first 18 meetings.

“The Dodgers have first-place ice cream,” manager Dave Roberts said. “So, for all the Dodger employees, you’re welcome.”

The Dodgers chose to go with a bullpen game Friday when David Price was scratched from his start because of a sore elbow. They used all 11 of their relievers. They needed some length from Urías on Saturday and he supplied some, holding the Giants to one first-inning run over 5 2/3 frames despite runners reaching scoring position in five different innings. He scattered eight hits with eight strikeouts and no walks.

“We know that my career has always been, obviously, about limitations,” Urías said in Spanish. “This year is the first year they’ve loosened the reins a bit and I trust in them a lot.”

The Giants gave the ball to 33-year-old Jay Jackson for his first major-league start, and are expected to rely on a bullpen game again Sunday as they navigate the schedule after losing starters Alex Wood (COVID-19) and Johnny Cueto (elbow) last week.

The Dodgers, in turn, pounced with three runs in the first inning, surpassing their scoring output from Friday two outs into the game.

“Today is a picture of what we can do for the rest of the year,” second baseman Trea Turner said.

Turner quickly rebounded from Friday’s game-deciding throwing error with a home run to lead off the game against Jackson, a right-hander. Two batters later, Mookie Betts worked a walk before stealing second base. Justin Turner followed with another walk. Betts and Turner then executed a double steal in time for Corey Seager’s sacrifice fly.

Next, AJ Pollock smashed an RBI double to make it 3-0. It was the ideal start for a sputtering offense that hadn’t scored more than five runs in a game since Aug. 18.

The momentum, however, came to a halt. Pollock broke for third base early and was picked off by reliever Jarlin García. The play ended with Pollock sliding awkwardly into third. He rose grabbing his right hamstring, limped off and received help going down the dugout steps.

“AJ coming out of the game, losing him, took a little bit out of our sail,” Roberts said of Pollock, who suffered a Grade 2 right hamstring strain and is expected to miss at least two to three weeks.

Highlights from the Dodgers’ 6-1 road victory over the San Francisco Giants on Saturday night.

Without Pollock, Los Angeles was held scoreless until Justin Turner singled, took second base on a throwing error, advanced to third on a wild pitch and scored on former Angel José Quintana’s balk. The ruling prompted Giants manager Gabe Kapler to angrily protest the call to no avail.

It didn’t matter. In the ninth inning, Seager blasted a curveball over the wall in center field and Albert Pujols delivered a pinch-hit sacrifice fly to pad the lead while the Giants’ bats remained silent over the final eight innings. The Dodgers rode their pitching advantage back into a first-place tie. They’ll be alone atop the division if they do it again Sunday.

Clayton Kershaw progresses toward his return

Clayton Kershaw will attempt to check off the final box in his return from the injured list Tuesday when he pitches in triple-A Oklahoma City on a rehab assignment.

Roberts said Kershaw will log three innings against the Albuquerque Isotopes, the Colorado Rockies’ triple-A affiliate. Kershaw was cleared for the outing after tossing two innings in a simulated setting Saturday at Oracle Park. The left-hander will throw a bullpen session Sunday.

Kershaw, 33, hasn’t pitched for the Dodgers since July 3. He landed on the injured four days later with forearm inflammation. He and the Dodgers expected a quick return, within a few weeks, but he suffered a setback in a simulated game in late July. As a result, he’s so far missed two months.

Roberts said Kershaw could come off the injured list if he doesn’t suffer a setback in Oklahoma City. That would give him around three weeks to build up arm strength before the postseason.

Tony Gonsolin is on track to rejoin the Dodgers as early as the end of the week. The 27-year-old right-hander started for single-A Rancho Cucamonga on a rehab assignment Saturday, giving up a run on three hits over 21/3 innings. He threw 41 pitches.

Roberts said the Dodgers could activate Gonsolin if he emerged healthy. Gonsolin has been on the injured list since July 31 with shoulder inflammation.

Price’s status, however, isn’t as promising. Roberts said Price felt “a little bit better” Saturday but placing him on the injured list remained a possibility.

Right-hander Andre Jackson was with the club Saturday but wasn’t added to the active roster. Roberts said Jackson will be part of a couple of roster moves the Dodgers make “over the next couple of days.”