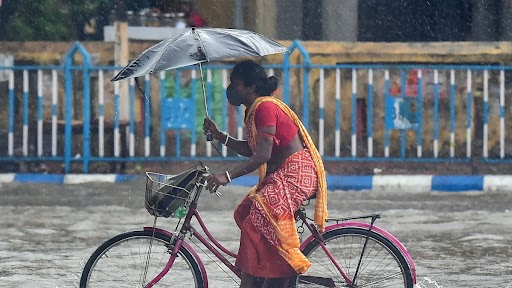 Monsoon 2021 Forecast: Maharashtra, Goa and Gujarat Brace for More Rains Till September 9, Rainfall to Increase in North India from Tomorrow

Giving details about the weather conditions and monsoon progress, the IMD said that rainfall activity over Central and East India is very likely to increase from today, i.e. from September 5. The weather agency said widespread rainfall activity with heavy showers is very likely over Madhya Pradesh, Vidarbha and Chhattisgarh during the next 4-5 days; over Odisha during till September 7 and over Bihar, Jharkhand, and Gangetic West Bengal on September 6 and 7. Lightning Facts and Risks: How is Lightning Caused? Check Dos and Don’ts That You Should Follow to reduce Risk During Lightning Strike.

The IMD said that subdued rainfall activity is very likely over northwest India during the next 2 days except Uttarakhand and northwest Uttar Pradesh where heavy rainfall is likely. The IMD further added that rainfall activity is very likely to increase with scattered to fairly widespread rainfall from September 6 over most parts of northwest India. “Isolated heavy falls are also likely over Himachal Pradesh, Punjab, Uttar Pradesh, Haryana,  Chandigarh and parts of Rajasthan on September 7 and 8 and isolated heavy to very heavy falls very likely over Uttarakhand on September 6 and 7, 2021”, the IMD said.

(The above story first appeared on LatestLY on Sep 05, 2021 10:13 AM IST. For more news and updates on politics, world, sports, entertainment and lifestyle, log on to our website latestly.com).