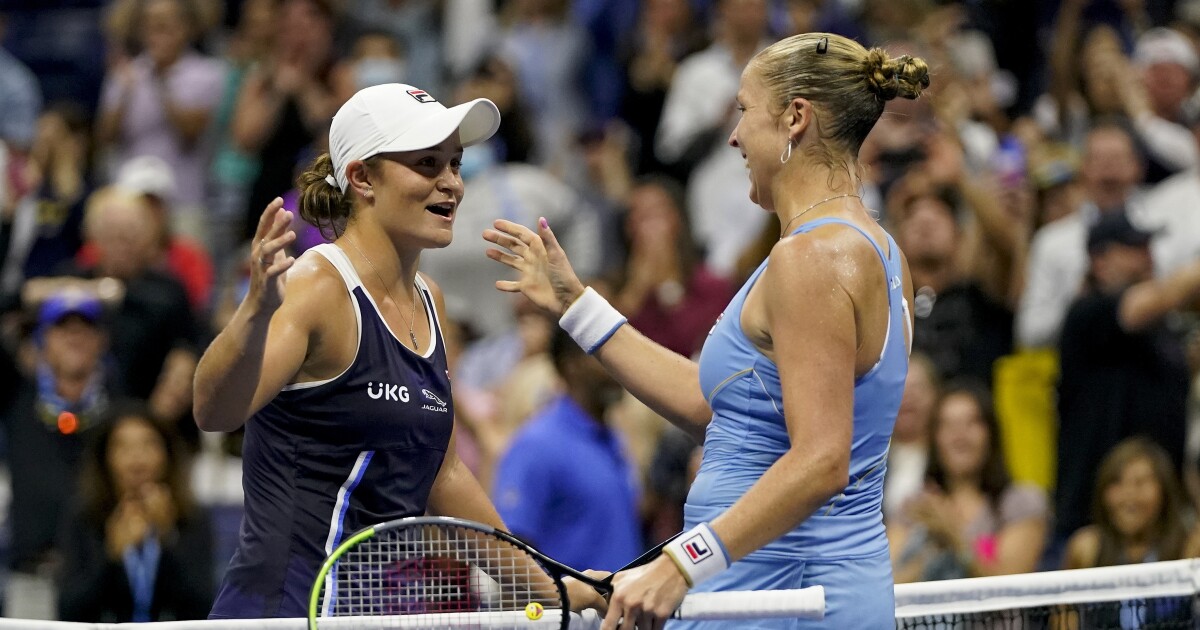 Shelby Rogers keeps a journal that she fills with observations on her opponents and the lessons she has learned each time she loses to them. With an 0-5 career record against world No. 1 Ashleigh Barty, Rogers had opportunities to compile a lot of detailed notes on the hard-hitting Australian.

“Half my book is on Ash at this point,” Rogers said. “It’s the same thing. She doesn’t miss a ball.”

Rogers can add a new and more pleasant chapter to her journal. Ranked No. 43 in the world and the last American woman standing in the U.S. Open draw as third-round play wrapped up, the 28-year-old from Charleston, S.C., surprised Barty and the tennis world by rallying from 2-5 in the third set for a 6-1, 1-6, 7-6 (5) victory Saturday night before a raucous crowd at Arthur Ashe Stadium.

“Gosh, that was really something special. I got chills out there on the court,” Rogers said. “I don’t know if that’s normal when you’re playing a tennis match, but it happened. I will never forget that moment.”

Barty, this year’s Wimbledon champion, clearly was off her game on Saturday and was especially erratic on her serve, committing eight double faults and serving only six aces. She committed 39 unforced errors and hit 37 winners; Rogers hit 18 winners and made only 20 unforced errors.

But Rogers put Barty off balance from the start on a court that plays slow at night, dialing back her usual aggression and showing patience against Barty’s trademark slice. The notes she had taken helped her realize she had to change her tactics from their previous five matchups or the result would be the same — another loss and more long entries in her journal

“I think what I’ve learned most from her is that she’s No. 1 for a reason,” Rogers said. . “It was going to take everything I had tonight to beat her. I gave everything I had and got the win. That’s what it comes down to.”

“At the 5-4 game, we played some long points. I mean, I didn’t play too many bad points. Shelby came up with some really good stuff when it mattered most,” Barty said.

“A forehand lob, 30-all, you tip your hat and say, ‘Too good.’ I think there are a few things tonight I’m happy to accept. There are some things I’m disappointed in, without a doubt.

Rogers credited the crowd for carrying her over the finish line.

“I would go to say they’re probably the reason I won tonight, to be honest. I mean, my tactics, sure, were great, but they gave me something that I wouldn’t have probably been able to bring out of myself, so I’m super thankful for that,” she said.

Osaka’s teary post-match news conference on Friday was still a topic of discussion on Saturday. After losing to Fernandez, Osaka dissolved into tears and said she was “kind of at this point where I’m trying to figure out what I want to do, and I honestly don’t know when I’m going to play my next tennis match…I think I’m going to take a break from playing for a while.”

Osaka, publicly acknowledging for the first time that she has been battling depression since 2018, had withdrawn from the French Open and skipped Wimbledon to safeguard her mental well-being. While here she said on social media she was trying to improve her outlook by appreciating small and simple victories off the court, but her tearful news conference and stated intention to take time off suggested she’s not yet ready for the competitive and often lonely world of travel and elite international tennis.

No. 6 seed Bianca Andreescu of Canada, who has struggled through injuries since she won the 2019 U.S. Open and is only now rounding back into top form, offered insight into what Osaka is experiencing.

“I think with anything you’re passionate about, it’s always a love/hate relationship, because you want that thing so bad all the time, you want to be perfect. In my case, it’s tennis,” Andreescu said. “A lot of the times it can be difficult when things don’t go your way. You know, you get injured or Naomi had to deal with a lot, you know, with like media, social media, all that stuff.

“I think that’s part of the game, first of all. You have to, like, go through things, experience things to find out what really works for you, like how to deal with those things.”

Tennis Hall of Famer Billie Jean King sent a message of support to Osaka on Twitter, saying, “Take all the time you need to recover, rest, and heal, @naomiosaka. Sending you love and support.”

Osaka is missed here, but steadying her life is more important than continuing her tennis career. It would be wonderful to see her here again, but for now, at least, the upsets by Fernandez, Alcaraz and Rogers have made this a memorable Open for happy reasons.