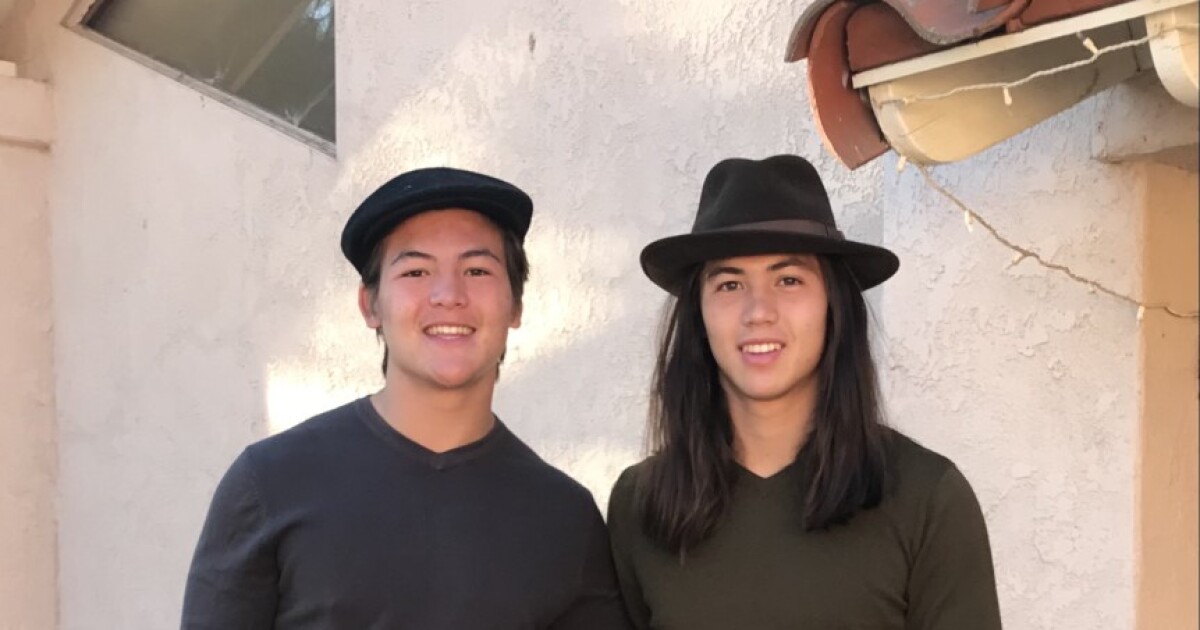 Sondheimer: Good days ahead with a Bear throwing passes to a Tiger

Possibly for the first time in high school football history, a receiver named Tiger caught a pass from a quarterback named Bear.

“It’s been something we’ve been talking about for a few years,” Murrieta Valley junior receiver Tiger Bachmeier said of catching passes from brother Bear Bachmeier, a freshman quarterback.

It happened two weeks ago in the season opener against Paloma Valley.

In the third quarter, Tiger was going to run a streak pattern, but the defensive back backed off so he changed his pattern to a 15-yard out.

“It was a tight spiral right into his hands,” Bear said.

It was the first of what could be many connections over the next two seasons.

“I couldn’t pause the game and give him a big hug,” Bear said. “It was a big moment for us.”

A broadcaster told his audience, “Welcome to the jungle.”

Oldest brother Hank was a star quarterback at Murrieta Valley who now plays for Boise State. Their sister, Ella, runs track at University of Redlands. They have an 11-year-old brother, Cougar, who’s learning to play quarterback. They live in the rural gated community of Rancho Capistrano surrounded by the Cleveland National Forest.

“There’s a mountain right above our school off Ortega Highway,” coach George Wilson said. “They literally live in the forest.”

There’s a field by the house where the boys practice passing and receiving. And, of course, there’s animals dropping by, from coyotes to deer to the occasional mountain lion.

“I’ve been standing face to face with coyotes,” Tiger said. “You have to look at them in the eyes and tell them to back off and show no fear. I usually tell people I killed a tiger with a spear when I was young.”

The truth is the boys are brilliant in sports and academics. Tiger, 6-feet-1 and 185 pounds, is a straight-A student, speaks Chinese, flies planes, pole vaults, plays guitar, studies journalism and has hair flowing to his shoulders because he wanted to look like Hall of Fame safety Troy Polamalu and decided it was his good luck charm. He’s a standout defensive back and receiver. He touched the ball five times against Paloma Valley and scored three touchdowns.

Bear, 6-2 and 205 pounds, is a straight-A student who’s serving as the backup quarterback to Utah-bound Brandon Rose and appreciating Tiger driving him a ride to school every day. His hair is also starting to grow out. What do you expect with brothers named Bear and Tiger?

“He’s a full-fledged Division 1 quarterback,” Wilson said. “He’s going to be the real deal. I’ve been with him for a couple of months. The way he throws and his maturity, he’s a big-time guy.”

They brothers are expected to be a prolific passing combination in 2022. For this season, Tiger will be doing his best to help Rose, who has guided Murrieta Valley to a 1-1 start.

Meanwhile, everyone gets to enjoy the entertainment of Tiger coming up with one-liners or helping his brother with one-liners that play off their first names whenever a college makes a scholarship offer and they announce it on social media.

When Cal offered a scholarship, Tiger wrote, “This Tiger’s been raised with a Bear!”

When Arizona offered, it was, “When the going gets tough, this Tiger’s proven to ‘Bear Down.’”

When Washington State offered, it was, “Uh-oh. There’s a Tiger loose on The Palouse!”

When Oregon offered, it was, “Whoever thought a Tiger would get along with a Duck?”

Get ready for the Tiger & Bear Show. It’s coming soon.