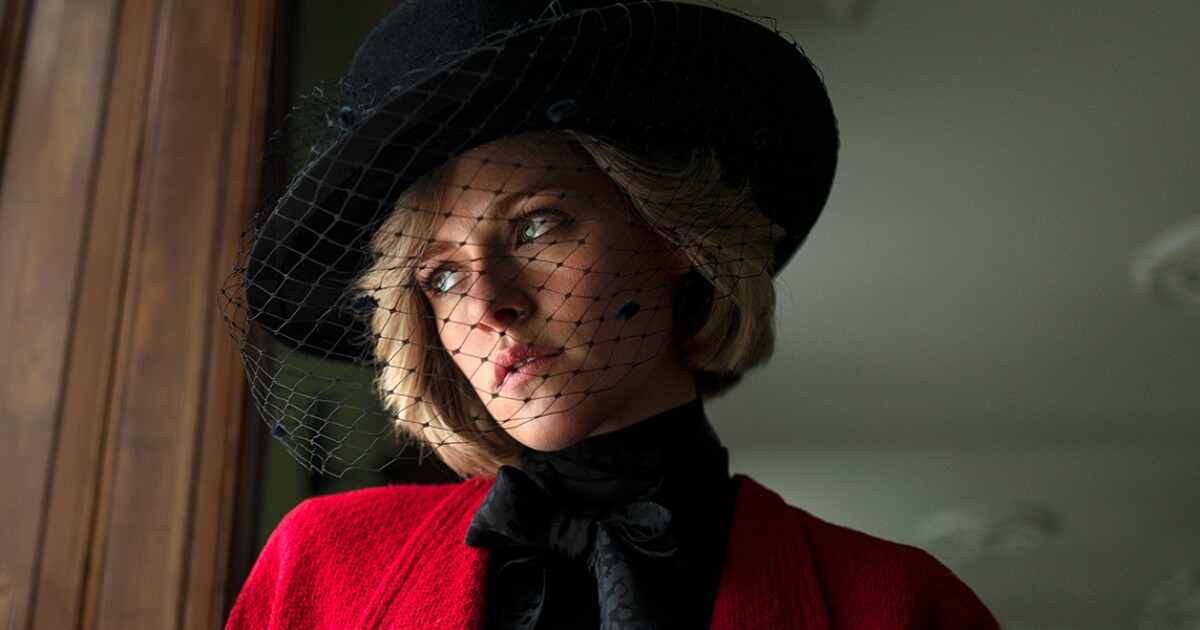 Ah, what a joy to be back in packed theaters again, seated in the dark with strangers and collectively transfixed by the power of the moving image. Also, what a horror, what an utter creeping horror to think of all the invisible deadly pathogens potentially floating around us as we huddle shoulder-to-shoulder. Even here at this first Telluride Film Festival of the COVID-19 era, where vaccine and mask requirements are in full effect, taking your seat for a hotly anticipated title like “The Power of the Dog” or “King Richard” can induce a tremor of anxiety. Halfway through Saturday’s North American premiere of “Spencer,” the mesmerizing new drama starring Kristen Stewart as Princess Diana, I was tempted to ask the fool in front of me to pull his mask up properly over his nose — only to catch myself and wonder if we were all fools for being there in the first place.

Maybe the huge crowd was getting to me: Fresh off its glowing reception overseas at the Venice International Film Festival, “Spencer” had packed an excited audience into a 500-seat theater, one of this small Colorado mountain town’s larger public venues. Or maybe it was the sheer relentless claustrophobia of the movie itself, boldly orchestrated by the Chilean director Pablo Larraín as a kind of biographical horror fantasia and companion piece to his equally hypnotic “Jackie.” That movie, starring Natalie Portman as Jacqueline Kennedy, largely played out in the aftermath of her husband’s assassination; “Spencer,” which unfolds over a three-day Christmas celebration at the royal family’s Norfolk digs, also captures the end of a famously imperfect marriage.

That’s the conceit, anyway, of Steven Knight’s screenplay, which follows Diana as she chafes against her gilded cage over three torturous days. It’s a radical exercise in subjectivity, as the defiant princess is mostly isolated from the chief architects of her misery; Prince Charles and other members of the royal family are only glancingly seen, and Diana’s sole ally, besides young William and Harry, is a sympathetic maid (the excellent Sally Hawkins). The time frame is the early ’90s; Larraín has little interest in exact dates or other factual specifics, most of which would be superfluous anyway. “Spencer” wisely assumes we already know a lot of the ugly details.

Still, there are ugly details aplenty, like the expected but not overemphasized scenes of Diana binging and purging and flirting with self-harm. And there are gorgeous details, too, in the sumptuous swirl of the costumes and production design and the richly starched tones favored by the cinematographer Claire Mathon (“Portrait of a Lady on Fire”), whose camera chases after Diana down eerily empty palatial corridors and sometimes runs alongside her out in the open, in a few rare moments of liberated bliss. But if this is beautiful filmmaking, it is also slyly subversive of its own beauty, and of the ritualized pomp and formality that, for the free-spirited Diana, proved an intolerable substitute for a family’s love.

We watch movies about royalty, of course, to savor those rituals, to luxuriate in the gleaming spectacle of lives vastly more privileged than our own. In “Spencer,” those surface details quickly turn corrosive, none more so than a string of pearls that becomes an emblem of Diana’s loveless marriage, a choker in every sense. Stewart literalizes that metaphor still further with her breathy, increasingly frenzied delivery; for all the attention that her English accent has received, as an American actor’s English accent always will, it’s hardly the most significant aspect of her vocal stylization here.

A high-profile new Diana performance seems to materialize every year these days (“The Crown’s” excellent Emma Corrin will soon pass the baton to Elizabeth Debicki), and Stewart’s Diana may well stand out as one of the more divisive interpretations. That’s partly because the actor tends to divide moviegoers to begin with (especially those who haven’t bothered to see her superb work in Olivier Assayas’ ”Clouds of Sils Maria” and “Personal Shopper”), and skeptics may not be excited to hear that there’s as much of Stewart in this performance as there is of Diana herself. Locating an ideal balance between impeccable mimicry and her own personal experience as a much-hounded celebrity, Stewart turns even her own counterintuitive casting into a subtextual weapon. If she ever seems out of place in this lavishly appointed mausoleum, just imagine how Diana must have felt.

Like many prestige titles premiering at the major fall festivals in Venice, Telluride, Toronto and New York, “Spencer” (which Neon will release Nov. 5 in theaters) will receive an awards push heavily focused on its lead actor. It’s more than merited, not least because this is the rare picture in which the quality of the performance feels in sync with the quality of the filmmaking. Although the results aren’t quite as wire-to-wire impressive, Joe Wright’s elaborately staged “Cyrano,” adapted by Erica Schmidt from her own musical adaptation of the 1897 Edmond Rostand play, boasts enough virtuoso flourishes to feel like more than just an unadorned showcase for Peter Dinklage’s central performance.

Then again, even that might have been enough. Reprising a role he played onstage, Dinklage — who was on hand in Telluride to receive a silver medallion and career tribute from the festival — makes an inspired Cyrano de Bergerac, his bristling intelligence and marvelous way with words both expressing and concealing his character’s love for the elusive Roxanne (an excellent Haley Bennett). As an unfashionably sincere tribute to that love, “Cyrano” has its banal stretches; it also has a solid supporting cast (an endearingly tongue-tied Kelvin Harrison Jr., a suitably villainous Ben Mendelsohn); affecting music and lyrics by the National; and Wright’s characteristically deft mise-en-scène. Although neither as formally stylized as his “Anna Karenina” nor as emotionally immediate as his “Pride & Prejudice,” “Cyrano,” which United Artists Releasing will release Dec. 31, succeeds in turning blatantly artificial devices into pure, unforced feeling.

That places it in refreshing contrast with Wes Anderson’s tedious “The French Dispatch,” in which blatantly artificial devices are seldom much more than that. Popping up for a few surprise screenings in Telluride after its mixed reception in Cannes, this wobbly cinematic croquembouche (which opens Oct. 22 via Searchlight Pictures) pays ostensible homage to the eternal pleasures of France and the glory days of American literary journalism. But its engagement with these subjects rarely goes beyond the decorative, and the light, airy divertissement I was expecting feels curiously bogged down rather than liberated by Anderson’s five-part vignette structure.

A far more rewarding Cannes-to-Telluride import: “Red Rocket,” a hilariously appalling lowlife odyssey from the writer-director Sean Baker (“Tangerine,” “The Florida Project”), and a movie I liked from its opening blast of ’N Sync’s 2000 earworm “Bye Bye Bye.” That classic kiss-off anthem finds a perfect addressee in the form of one Mikey Saber (a terrific Simon Rex), a down-on-his-luck adult performer who returns to his old Texas stamping ground, where he wastes no time seducing, exploiting and scamming everyone in sight. The casting of Rex, whose flamed-out acting, rapping and modeling career includes some past dabbling in porn, is a masterstroke, so is the pre-2016 election time frame, which adds a political edge to this story of a has-been celebrity preying on the red-state underbelly. (A24 will release it later this year.)

One of “Red Rocket’s” central themes — the hustle as a vital American pastime — gets sharply and entertainingly dissected in “King Richard,” which premiered in Telluride a few months ahead of its Nov. 19 Warner Bros./HBO Max release. Although Green’s latest features an irrepressible, re-energized Will Smith as Richard Williams, the father of Venus and Serena Williams and a stage dad like no other, the movie never allows its title character to suck up the dramatic oxygen. Crucially, Saniyya Sidney (as Venus), Demi Singleton (as Serena) and especially Aunjanue Ellis (as Brandi Williams, the family’s matriarch and true backbone) are on hand to counterbalance their top-billed costar in what turns out to be not just a terrific tennis movie, but also a drama structured as a series of psychological volleys.

“King Richard” — which, like so many Telluride premieres, ignited its own round of awards speculation — is the latest feature directed by Reinaldo Marcus Green; with any luck, it’ll send a few viewers back to his somber, underappreciated debut feature, “Monsters and Men.” The emotional range expressed between those two films is remarkable, as is the range of ideas about Black survival and social mobility in contemporary America. Richard’s stubborn insistence that he alone knows best can be infuriating and self-serving, but by the end it’s awfully hard not to admire. No less than “Spencer,” “King Richard” weighs the emotional toll of being in a family that operates by its own rules, with the crucial difference that these rules, tough and misguided as they can be, are also an unmistakable expression of love.