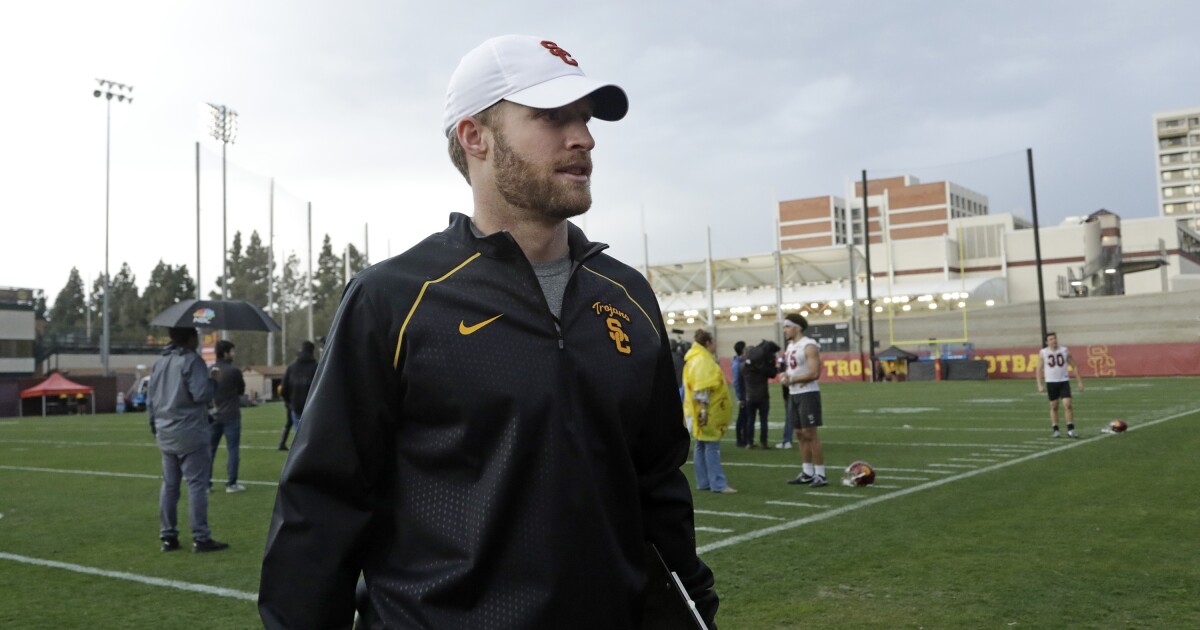 After just one season as USC’s offensive coordinator, Graham Harrell suddenly had one of the most desired minds in football.

Never mind the disgruntled Trojans fan base, frustrated that “Tailback U” still couldn’t grind out the tough yards in Harrell’s version of the Air Raid offense. There was a logical argument bolstering Harrell’s perceived brilliance. He had lost his starting quarterback, JT Daniels, and quickly developed true freshman Kedon Slovis, a relative unknown, into a budding star. Harrell was young, a former backup to Aaron Rodgers and a proud protégé of Mike Leach. He was all too sellable.

So first came a dalliance with the Texas Longhorns, then real interest from the Philadelphia Eagles as the calendar turned to 2020. But USC convinced Harrell to stay with a significant raise, believing he was an integral part of athletic director Mike Bohn’s spirited attempt to revive the program’s pulse under Clay Helton.

Since then, with each time USC’s offense has taken the field — mind you, that has been only seven times because of the pandemic — it’s become easier to wonder: Was Harrell actually worth the investment?

Saturday in the Trojans’ season-opening 30-7 victory over San Jose State, Harrell’s offense nearly squandered an encouraging defensive effort with many of the same old issues — ineptitude in the red zone, questionable use of the run game and a passing attack that isn’t creating the explosive plays in space fans were promised when Helton hired Harrell out of North Texas.

Despite the insistence that Slovis is a Heisman Trophy candidate and future first-round draft pick, it is undeniable that he has regressed since his freshman year. It’s not that he did anything wrong against the Spartans — he completed 25 of 36 passes for 263 yards and two touchdowns — but his performance did not elevate USC into a team that looked capable of going much higher than its No. 15 preseason ranking.

Slovis shouldn’t have to bear all the responsibility. Harrell should take a helping too, but he hasn’t in any meaningful way.

He has some valid excuses at his disposal. The Pac-12’s faint attempt at a 2020 season did not help cohesion, but that was the case for everyone. This season the Trojans had a full offseason to work out the kinks, but USC lost five-star talent Bru McCoy to a disciplinary issue and fellow receiver Gary Bryant Jr. to injury and the COVID-19 protocols. The wide receiver depth is now thinner than usual, and the Trojans are starting two redshirt freshmen at tackle.

But this is USC — and that was San Jose State. The Trojans simply can’t accept scoring just two offensive touchdowns against the Spartans, although Helton didn’t quite see it that way.

“You come out and you had a 30-point game against a top-25 team in my mind,” Helton said. “The thing I think we could do better is I’d like to see better red zone efficiency instead of those two field goals. I’d like eight more points on the board.”

Thing is, it didn’t have to be so hard. It was clear from the start that USC running backs Vavae Malepeai and Keaontay Ingram could grab yards in bunches against this defense. It was refreshing to see the Trojans handle someone up front, and yet on numerous, key third-and-short plays in the first half, Harrell elected to pass. The execution just wasn’t there.

USC kicked field goals on both of its trips inside the 10-yard line in the first half, settling for a 13-0 lead. There was a disconnect between those results and the fact that Malepeai had 58 yards in 10 carries and Ingram, the beefy Texas transfer, had 55 in 10.

Something was off, and it was no surprise when isolated boos could be heard in the Coliseum after USC quickly punted on its first drive of the second half. These are smart football fans who have seen way too much mediocrity the last decade-plus, and they knew exactly what was coming — San Jose State pulling to within 13-7.

Ultimately, if this continues, the axe will fall on Helton first. It was Helton who sent Tee Martin packing and went hunting for whatever Leach disciple would hang around for longer than a month.

The good news for the McKay Center brain trust is that the offense still seems salvageable.

Slovis can play better than this, as we’ve all seen — it’s just been a while. Receiver Drake London is dominant and belongs in the same sentence as all the USC greats at that position. Tahj Washington, the sophomore transfer from Memphis who caught the first touchdown of the season, has some sizzle. And the Trojans have two veteran backs who can leave opposing defenses black and blue — if they’re allowed.

Now it’s up to Harrell, who needs to back up the hype just as much as his quarterback.