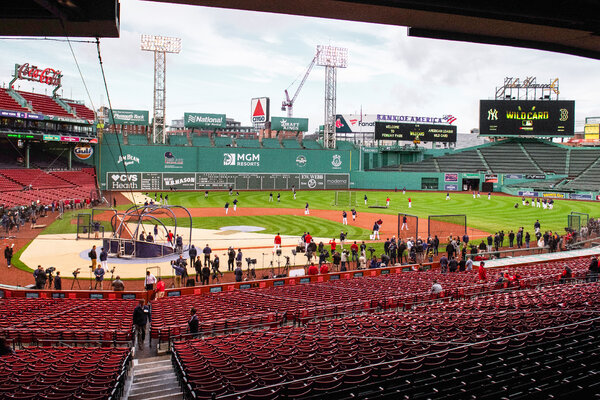 Those might be contradictory opinions, but it all depends on your perspective. If you’re a player, you hate it. If you’re a viewer, you love it.

“Is it fair? No, it’s not fair,” Curtis Granderson, the former major league outfielder, said on Tuesday. “Is it fun? Absolutely.”

The Yankees and the Boston Red Sox were scheduled to play the American League wild-card game at Fenway Park on Tuesday, followed on Wednesday by the National League game between the Los Angeles Dodgers and the St. Louis Cardinals at Dodger Stadium. The winner of each advances to a division series, meaning that the Dodgers are already facing elimination despite tying their franchise record for victories with 106.

The reason is a quirk: As great as the Dodgers were, they played in the same division as the San Francisco Giants, who were one game better. The Cardinals needed only 90 victories to share the stage.

“If I’m playing on a team that just won 100 games, I want to have the right to be out there and kind of stretch my chances for at least three games — not just one and done,” said the Hall of Famer Pedro Martinez, who will analyze the playoffs for TBS with Granderson and Jimmy Rollins. “The efforts of my entire team, my entire organization, going down the drain by losing one game? One little mistake?”

It would be fair to say Dee Strange-Gordon is a little biased toward his good friend and former Miami Marlins teammate Giancarlo Stanton, and he positively rhapsodized during a phone conversation last month, reminiscing about their time in 2017 when Stanton won the National League’s Most Valuable Player Award.

“It was special, man,” Strange-Gordon said at the start of September, recalling how when Stanton’s hot, “he can carry a club himself.”

Stanton has had some help lately, of course, especially from Aaron Judge, but as the Yankees head into the wild-card game, the 6-foot-6 Stanton has happily put the club on his massive shoulders.

Strange-Gordon described how Stanton, at his best, morphs into a mode where he is hitting angry. At the time, Stanton had homered in eight of his past 18 games. That hot streak didn’t stop: Stanton finished the season with seven more homers in his last 15 games. His 17 homers since Aug. 17 are tied with Toronto’s Marcus Semien for the second-most in the majors. Only Kansas City’s Salvador Perez (18) had more.

Stanton chuckled when Strange-Gordon’s comment was relayed to him, and acknowledged that his friend was right.

“It’s where’s the level of your mind and body that day and you try to re-create that wave length of that balance of focus and preparation,” he explained.

“Ideally, every day you try to work to that mode,” Stanton said. “Sometimes you could be there and the results won’t show. You have to know when to make adjustments and when not, that’s why the game is so difficult in that way.”

When Stanton is “hitting angry,” where does he direct that anger? At the world? The pitcher? The ball?

“It isn’t anything personal,” Stanton said, noting that it mainly means he forgets all distractions. “The more distractions, the faster that little seamed ball comes at you.”

It is impossible to approach a do-or-die game between the Yankees and the Boston Red Sox at Fenway Park without thinking of Bucky Dent’s heroics in a tiebreaker game in 1978. The win in a 163rd regular season game catapulted the Yankees to the postseason and a World Series title. It furthered despair among Red Sox fans to the point that Dent earned himself an unprintable nickname throughout New England.

In interviews with Dent and Ron Guidry, the Yankees’ starting pitcher in that 1978 game, Gary Phillips got some tips on how to win a game like this.

When asked how the Yankees could get past the Boston Red Sox in a wild-card game that could extend or end a season that has had countless ups and downs, Bucky Dent had some tongue-in-cheek advice: “Use Mickey Rivers’s bat.”

That move worked for Dent 43 years ago; who’s to say it wouldn’t for a Yankee on Tuesday night?

J.D. Martinez, the most decorated slugger on the Boston Red Sox, is not on the team’s wild-card game roster and as a result will not play in Tuesday night’s game. Martinez suffered a bizarre injury in the sixth inning of Sunday’s regular season finale against Washington, slipping when he stepped on second base while running out to his position.

Because the Red Sox, an American League team, were playing in a National League park, the Nationals’ home, Martinez was playing the outfield instead of his traditional designated hitter spot.

“J.D. has been stepping on that bag for 10 years,” Red Sox Manager Alex Cora said on Tuesday afternoon. “It just happened that he slipped.”

Martinez, 34 — a World Series winner with the Red Sox in 2018, a three-time Silver Slugger and a four-time All Star, including this season — had bounced back from a rough 2020 season to hit .286 with 28 home runs and 99 runs batted in. He trailed only third baseman Rafael Devers, 24, in on-base plus slugging percentage and R.B.I. on the Red Sox this season.

To account for Martinez’s absence, the Red Sox shifted their lineup around. Kyle Schwarber is the designated hitter, Bobby Dalbec is the first baseman, and the outfield will be Enrique Hernandez, Hunter Renfroe and Alex Verdugo.

In the realm of omens, this one is almost too real to believe. The Massachusetts state lottery on Monday evening had a game come up with the winning numbers 1-9-7-8. Surprisingly, there were only 18 tickets with those exact numbers.

We know when the American League wild-card game between the Yankees and the Boston Red Sox should start. The open question, when dealing with teams that are known for games that drag into the wee hours, is when it will end. The do-or-die game comes after a wild final day of the regular season in which there stood a very real possibility of a four-way tie for two postseason spots. That the Yankees and the Red Sox both won their games, and clinched postseason spots, with final-inning heroics was just showing off.

Tonight’s game will be a matchup of the Yankees ace Gerrit Cole and Nathan Eovaldi of the Boston Red Sox, who a few lifetimes ago was miscast as a future ace in the Bronx.

The Yankees are hoping that Cole, their $324 million star, can step up as their go-to guy when they need him most. There are no guarantees, however. He was a favorite for the Cy Young Award for much of the season, and ended up going 16-8 with a 3.23 E.R.A. and 243 strikeouts. But a sharp fade down the stretch, and his connection with baseball’s enforcement of its sticky substance policy, will most likely hand that award to Robbie Ray of the Toronto Blue Jays.

Eovaldi, on the other hand, has come a long way from his days of not quite living up to expectations with the Yankees in 2015 and 2016. He fought through some injuries and spent some time as a reliever, and this year he became an ace of sorts for Boston, going 11-9 with a 3.75 E.R.A. and 195 strikeouts. At least one metric indicates he was better than it seemed: His fielding independent pitching score, which is an estimate of a pitcher’s E.R.A. in events he was solely responsible for, was an American League-leading 2.79 — one spot ahead of Cole and seven spots ahead of Ray.

Boston, however, will have to hope Eovaldi has a short memory: In his last start against the Yankees, on Sept. 24, he was tattooed for seven runs in two and two-thirds innings. The winning pitcher of that game? Gerrit Cole. 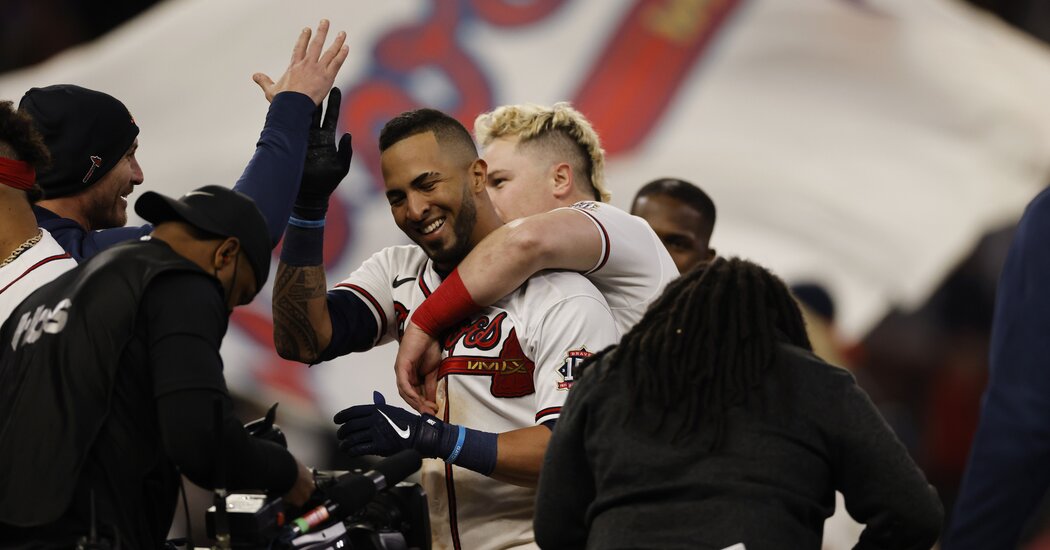 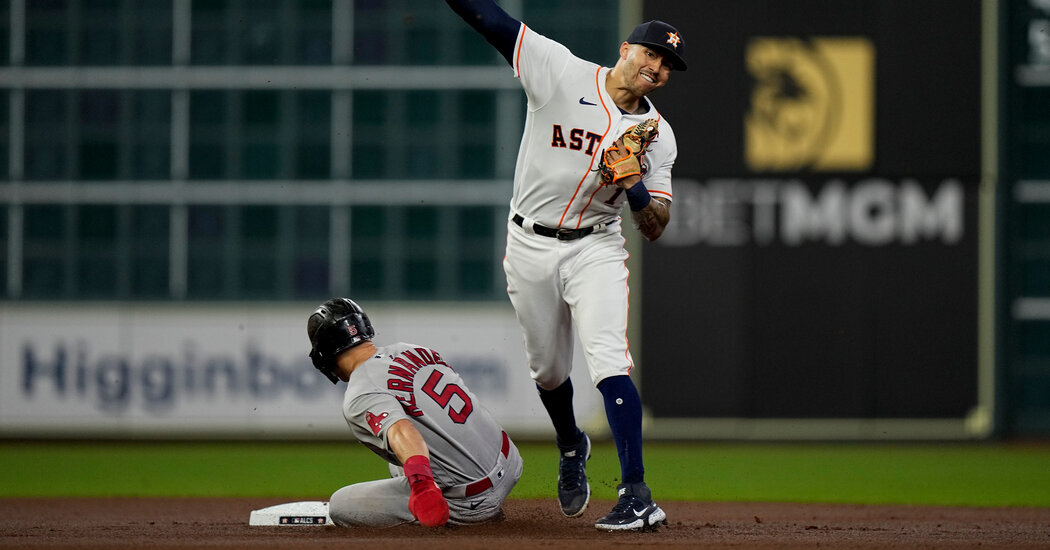 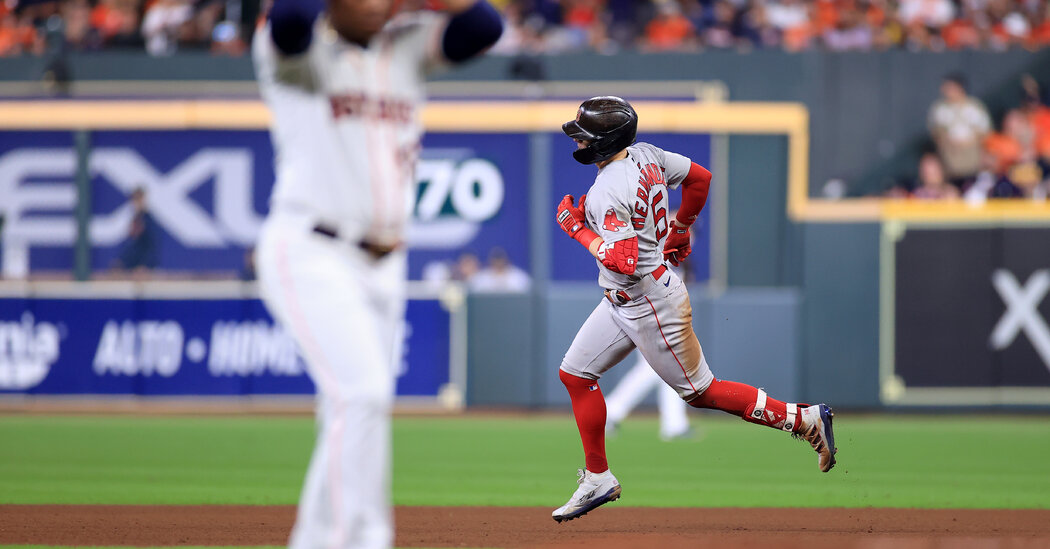 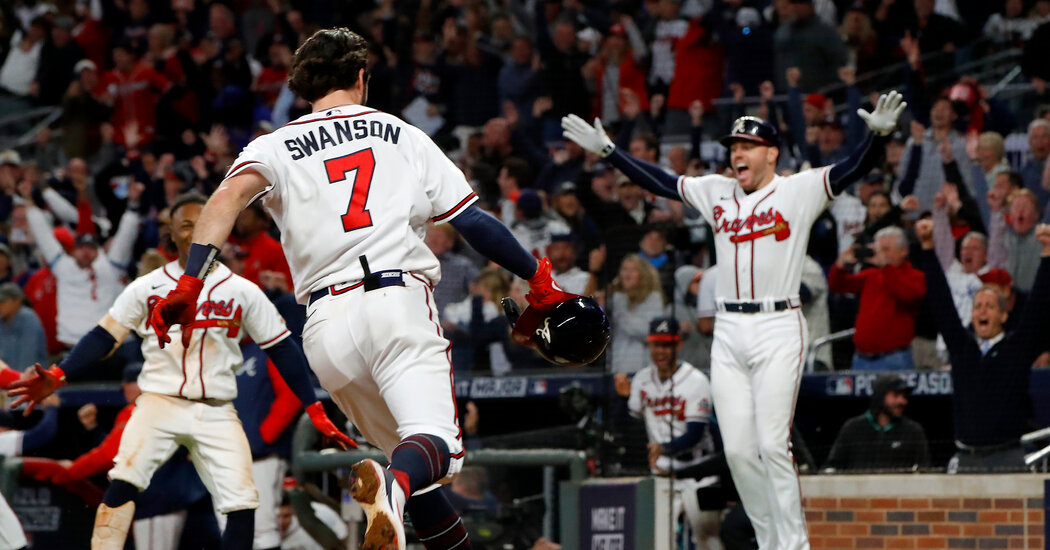