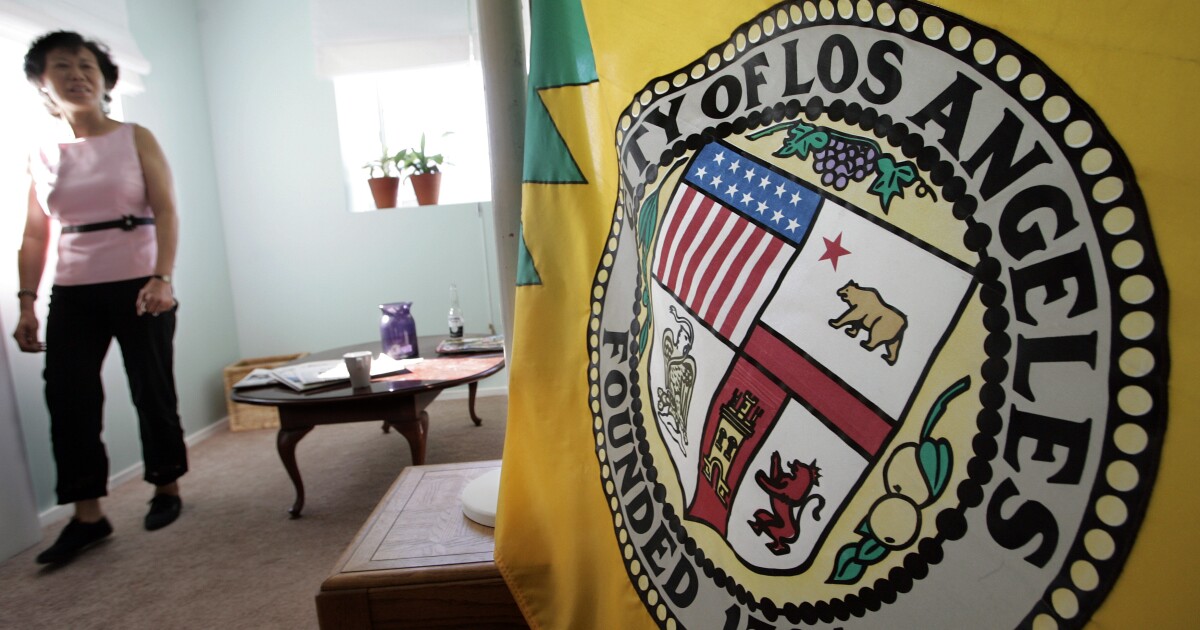 Government regulators have long failed to effectively oversee energy companies that rely on pipelines to transport large volumes of oil from offshore rigs, according to experts, environmental advocates and even reports by a federal watchdog agency.

Regulators admitted that inspection requirements for pipelines like the one that ruptured off the coast of Orange County in recent days are inadequate, records show, and environmentalists complain that federal authorities rely too heavily on oil companies to conduct their own inspections of their infrastructure.

Many ships and a maze of pipelines

With Los Angeles and Long Beach harbors near capacity, container ships and oil tankers have had to drop massive anchors in designated sites that place them near oil platforms as well as an undersea infrastructure of oil lines, sewage treatment pipes and communications equipment.

The U.S. Coast Guard is now looking at the possibility that the crush of shipping traffic came into violent contact with this network of undersea infrastructure and triggered a spill that sent an estimated 144,000 gallons of oil into the ocean.

More on the oil spill

— The energy company at the center of the oil spill off Orange County was alerted early Saturday that something was awry with its offshore pipeline, but it took more than three hours before the pipeline was shut down, federal regulators said Tuesday.

— Experts pointed to the leaking oil pipeline off O.C. as just one example of the nonstop harm caused by drilling, production and combustion of fossil fuels.

— The first federal lawsuit in the spill has been filed as residents take stock of losses.

— Nobody could have been surprised by this spill, writes columnist Steve Lopez. Now here’s what has to happen.

Officials and immunization advocates throughout California say persistent misconceptions and disinformation are hobbling efforts to promote the shots in certain parts of the state.

— Johnson & Johnson asked the Food and Drug Administration on Tuesday to allow extra shots of its COVID-19 vaccine as the U.S. government moves toward expanding its booster campaign.

— The Biden administration on Tuesday ordered Arizona Gov. Doug Ducey to stop using the state’s federal pandemic funding on a pair of new education grants that can only be directed to schools without mask mandates.

— AstraZeneca asked the U.S. Food and Drug Administration to authorize emergency use of a long-acting antibody combination for COVID-19 prevention. It would likely go to people with compromised immune systems.

Many of the accusers of Dr. George Tyndall, a USC gynecologist accused of abusing young women for decades, have expressed outrage over the university’s handling of complaints against the physician. They are demanding an investigation into whether then-USC President C.L. Max Nikias or other administrators sought to cover up the allegations against the doctor, something Nikias has denied doing.

Legal experts said the need for an investigation into whether administrators knew about alleged sexual abuse by Tyndall and failed to act should have been obvious.

After you. No, please, after you!

Twenty-five years ago today, President Clinton and Republican challenger Bob Dole met for their first presidential debate — one, The Times reported, “marked largely by personal courtesy.” Clinton opened the debate by praising Dole’s record of public and military service. Dole passed up a chance for a broad attack on Clinton’s character. Later in the debate after Clinton delivered “yet another recitation of his accomplishments,” Dole looked into the camera and recalled the senator’s late brother, who, Dole said, liked to talk so much they called him “the Great Exaggerator.”

— L.A. will use more Colorado River water to reduce reliance on the hard-hit supplies from the State Water Project. With the project’s supplies now severely limited due to the drought, Southern California’s water agencies have begun shifting these precious supplies to areas that need it most.

— Educational leaders throughout the state are urgently warning teachers and school staff about a disturbing TikTok challenge that emerged this month urging students to slap teachers while recording it on video.

— The storm that descended on Southern California on Monday evening delivered more than 3,000 lightning strikes and left thousands of residents without power, officials said Tuesday.

— After 40 drawings without a big Powerball winner, a single ticket sold in Morro Bay, Calif., matched all six numbers drawn Monday and was the winner of the nearly $700-million jackpot prize, officials said.

— Faced with criticism from many Californians thrown out of work during the pandemic, Gov. Gavin Newsom on Tuesday gave his approval to a package of bills aimed at reducing delays and fraud in the state’s beleaguered unemployment benefits system.

— Frances Haugen, a former Facebook employee turned whistleblower, testified before Congress on Tuesday that lawmakers needed to regulate the social media giant because its products harm children and democracy.

— A group of prominent lawyers urged the California bar to launch an investigation into John C. Eastman’s role in advising President Trump on how he could overturn his election defeat, including by having his vice president refuse to count the electoral votes in seven states won by President Biden.

— A federal appeals court decided Tuesday that California must exempt federal immigration detention centers from its ban on for-profit prisons.

Sign up for our California Politics newsletter to get the best of The Times’ state politics reporting.

— Gathered inside a white tent, the pageant contestants had one hour to kill, skin and gut their sheep, 30 minutes to clean the intestines and 20 minutes to cut up the meat. We visit the 69th Miss Navajo Nation Pageant.

— Applicants in Afghanistan were hoping to win prestigious U.S.-funded Fulbright scholarships. Then the Taliban took over, and the U.S. went silent.

— Leaked financial data dubbed the Pandora Papers show London is a key hub for concealing cash and avoiding taxes for the ultra wealthy.

— Three scientists won the Nobel Prize in physics Tuesday for work that found order in seeming disorder, helping to explain and predict complex forces of nature, including expanding our understanding of climate change.

— Lisa Ling talks about the new season of her CNN series “This Is Life,” whose first episode connects today’s Stop Asian Hate movement with the tragic 1982 bludgeoning death of Vincent Chin. She also talks about her personal encounters with hate in California, including an incident at Whole Foods.

— Jesus, drugs and rock ’n’ roll combine in a lesser-known chapter in music history outlined in the new doc “The Jesus Music,” which traces the birth of contemporary Christian rock and pop music in America, in part, to an Orange County hippie church.

— After mysterious “30″ billboards began popping up in cities across the globe, rumor had it new music from Adele was on the way. Now she has confirmed the fan theories.

— Ozy Media was sued by an investor over its co-founder’s impersonation of a YouTube executive during a conference call with Goldman Sachs Group executives about a potential investment.

— Once shunned, people convicted of felonies are finding more employers open to hiring them as the economy surges and companies struggle to find enough workers.

— Lisa Rinna posted paparazzi photos of herself. Then she was sued for copyright infringement.

— The Dodgers won’t be getting pitcher Clayton Kershaw back for the playoffs and are holding out only slim hope that one of their most important hitters, Max Muncy, will be able to play later this month.

— Pau Gasol, the former Lakers great who formed a bond with Kobe Bryant on and off the court, has retired from professional basketball. Gasol announced the decision Tuesday. The Lakers will retire Gasol’s No. 16 jersey.

— Corey Seager is part of Dodgers history. Does he want to stick around for more?

— The first time she held her daughter, she had the sense she was drowning in mud, holding her baby over her head. She thought for sure they’d both go under. Even though the new mom had eight risk factors for postpartum depression, her doctors didn’t warn her.

— I’m open to raising taxes, writes columnist Jonah Goldberg. As a lifelong conservative, making this case comes as easily as arguing for a weak national defense, or more United Nations funding. So please bear with me as I walk through why I’m open to the idea.

You’ve probably seen it without even registering what you’re seeing. A flag of three vertical bands of color with sawtooth borders between, and some round fancy thing in the middle that’s indecipherable when you’re standing on the ground and the flag is flapping away 20 or 30 feet in the air. That’s the official flag of Los Angeles, with the city seal at its center. All hail! This banner has some oddball history that includes a surprise starring appearance at the 1980 Moscow Olympics, columnist Patt Morrison writes.

Today’s newsletter was curated by Laura Blasey and Amy Hubbard. Comments or ideas? Email us at headlines@latimes.com. 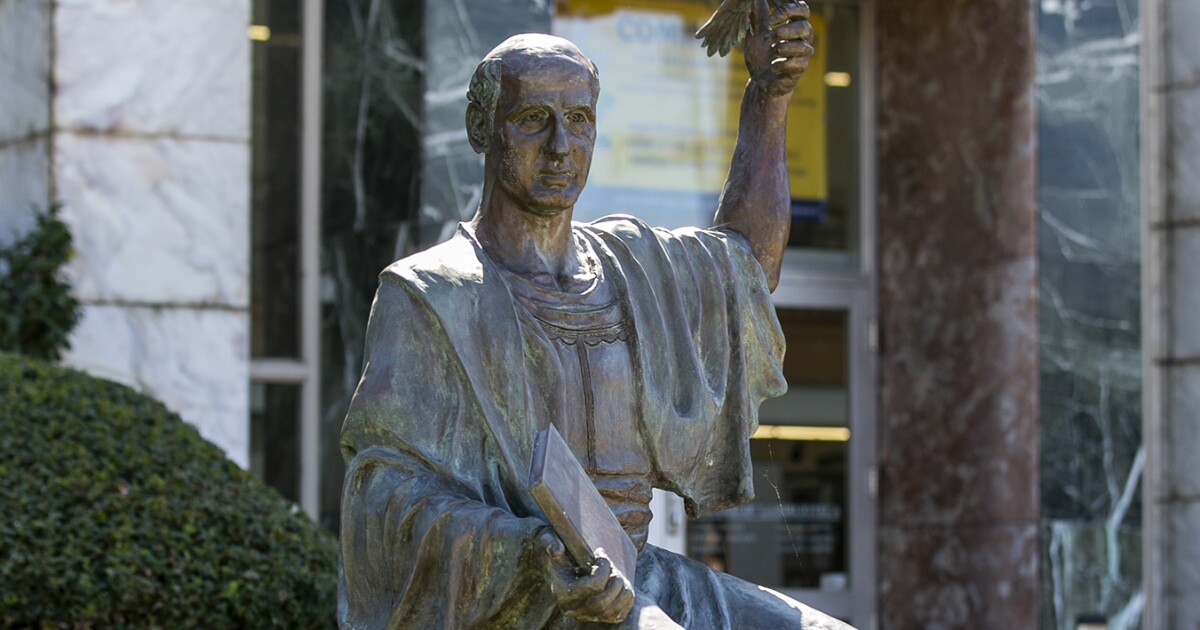