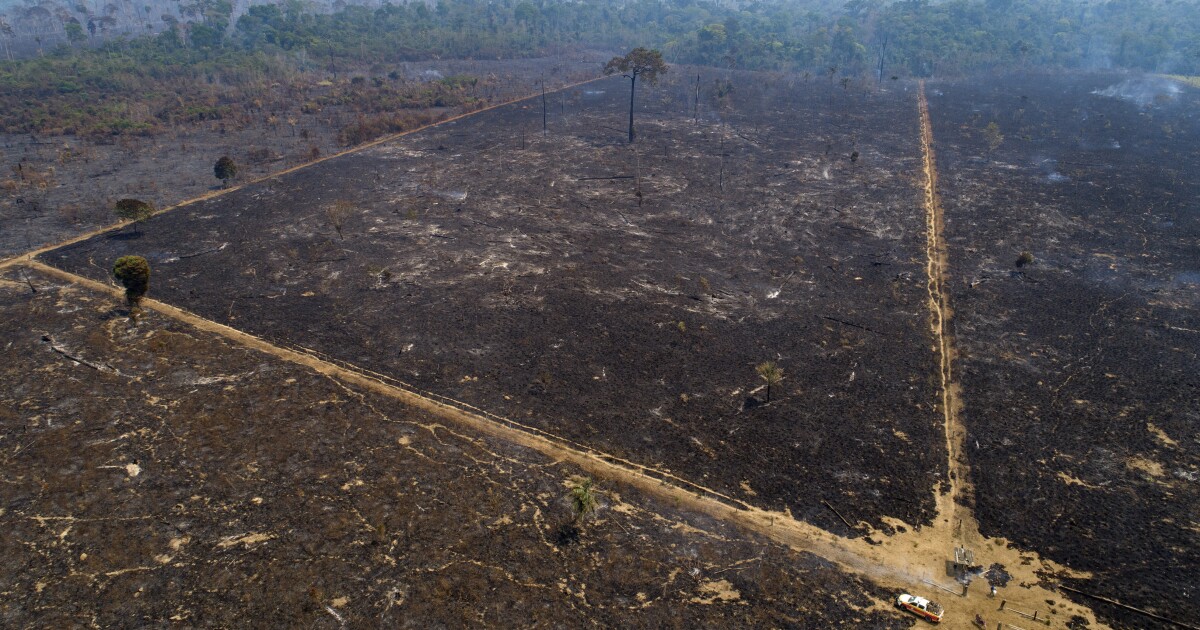 A group of climate lawyers called Tuesday for the International Criminal Court to launch an investigation into Brazil’s president for possible crimes against humanity over his administration’s Amazon policies.

The AllRise group filed a dossier with the global court alleging that Jair Bolsonaro’s administration is responsible for a “widespread attack on the Amazon, its dependants and its defenders” that affects the global population.

The call comes less than three weeks before the United Nations’ 26th Climate Change Conference of the Parties, known as the COP26, starts on Oct. 31 in Glasgow.

The 12-day summit aims to secure more ambitious commitments to limit global warming to well below 2 degrees Celsius with a goal of keeping it to 1.5 degrees Celsius compared with pre-industrial levels. The event also is focused on mobilizing financing to fight climate change and protecting vulnerable communities and natural habitats.

Since taking office, Bolsonaro has encouraged development within the Amazon and dismissed global complaints about its destruction as a plot to hold back Brazil’s agribusiness. His administration also weakened environmental authorities and backed legislative measures to loosen land protections, emboldening land grabbers.

“Crimes against nature are crimes against humanity. Jair Bolsonaro is fueling the mass destruction of the Amazon with eyes wide open and in full knowledge of the consequences, “ AllRise founder Johannes Wesemann said in a statement. ”The ICC has a clear duty to investigate environmental crimes of such global gravity.”

It is not the first time opponents of the right-wing Brazilian leader have asked the ICC to intervene.

Two years ago, a group of Brazilian lawyers and former ministers requested that the court investigate Bolsonaro for allegedly inciting the genocide of indigenous people and failing to safeguard the forests and protected lands they live in.

The court’s prosecution office receives hundreds of such filings each year, detailing alleged crimes around the world. It is obliged to study them all and evaluate whether the request falls within the court’s jurisdiction and, if it does, whether it merits further investigation or inclusion in one of the prosecution office’s ongoing probes.

Activists are increasingly pushing for prosecution of crimes against the environment to become part of the ICC’s core mission. In June a panel of international lawyers and experts published a proposed legal definition of the crime of “ecocide,” saying that it is time to extend the court’s founding treaty to include “protections for serious environmental harm, already recognized to be a matter of international concern.”

But preliminary figures released last month by the Brazilian National Institute for Space Research showed that deforestation in the Brazilian Amazon dropped for the second consecutive month in August compared with the same period in 2020.

Wesemann, however, insists Bolsonaro needs to be held accountable for Amazon communities and for the world.

“Our initiative has strong Brazilian support, but we don’t seek to speak on behalf of any Brazilian communities, nor claim to represent them,” he said. “Our case aims to add an important international dimension to their struggle. The Amazon is theirs, but it is needed by us all.”