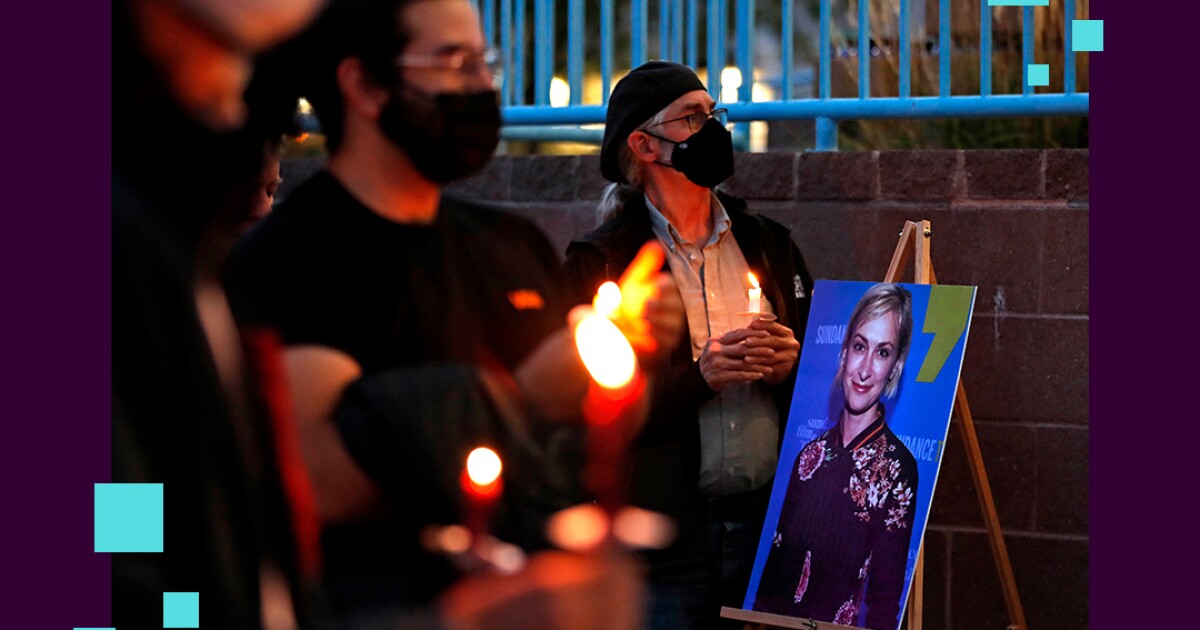 This is the Oct. 25, 2021, edition of the Wide Shot, a weekly newsletter about everything happening in the business of entertainment. Sign up here to get it in your inbox.

When a person dies on a film or television set — no matter how low budget or independent the production in question is — it’s a time for Hollywood to rethink how it handles the inherently dangerous aspects of creating mass entertainment.

As law enforcement investigates the killing of cinematographer Halyna Hutchins in an incident involving a firearm on the New Mexico set of “Rust,” we’re still learning details of how the tragedy happened.

Hutchins’ death has quickly spurred demands for real weapons, like the one held and discharged by Alec Baldwin while filming “Rust,” to be eliminated from film and television sets.

A Change.org petition to ban the use of real firearms in productions has more than 27,000 signatures after being shared by actor and director Olivia Wilde and others. “Hollywood: It’s time to create ‘Halyna’s Law,’” Wilde tweeted.

There also appears to be real momentum for internal reform in the entertainment business. Major studios are reviewing their weapons policies, people familiar with the matter told The Times. ABC procedural “The Rookie” has banned the firing of live guns on the show.

A broader real-weapons ban has growing support among producers, many of whom already see firing blanks as an unnecessary risk. Muzzle flashes, for example, are easy and cheap to add through special effects in post-production.

“I don’t see any reason for us to have real firing weapons on set,” indie filmmaker Graham Skipper told my colleagues Anousha Sakoui and Josh Rottenberg. “One person at a computer with the most basic editing software can make muzzle flashes. We’re not talking about the dinosaurs in ‘Jurassic Park’ here.”

On Monday, I asked every major studio whether they were considering a ban on real weapons. None so far has committed to implementing a blanket restriction.

When I was reporting Saturday on the issue of legal liabilities in the “Rust” case, experts were adamant that this tragedy would not have happened if standard protocols for handling guns on set had been followed. Sources have told The Times that safety procedures including gun inspections and safety meetings were not strictly followed, and worries had been raised about previous accidental gun discharges.

Even beyond the question of who’s responsible and what corners were cut, the situation flies in the face of even the basic rules of handling weapons, said Stuart Fraenkel, a Marine Corps veteran and civil litigator who has handled numerous personal injury and wrongful death cases.

“What we were taught in the Marine Corps and what we’re taught to get a firearms license is, you never point a firearm at anyone, loaded or unloaded, ever,” Fraenkel said.

Gun safety protocols appear to work well when followed. As one independent producer observed, on condition of anonymity, it has been 28 years since Brandon Lee died while making “The Crow.” How many millions of gunshots have been fired in action and war movies since then without someone getting killed? On the other hand, we don’t know how many people suffer preventable nonlethal injuries from weapons. We only hear about the deaths.”

It wouldn’t be surprising for wider prohibitions on certain weapons to take effect in the industry soon. Industries including Hollywood have self-regulated to avoid government clampdowns; that was the driving force behind the creation of the Motion Picture Assn. of America’s parental guidance rating system. Insurance providers that cover productions could also pressure filmmakers to avoid actual weapons.

The current situation clearly echoes the fallout from the 2014 death of camera assistant Sarah Jones, who was struck by a freight train on a trestle in Georgia during the filming of “Midnight Rider.” That case similarly prompted calls for greater attention to safety on productions.

But it’s still remarkable that the call for restrictions is gaining traction, even if it is just in Hollywood. “In a country where even the slaughter of kindergartners doesn’t result in new regulations,” the indie producer said, “it’s heartening to finally see concern over gun safety.”

Essential coverage of the ‘Rust’ tragedy

Number of the week

Despite being available on HBO Max for no additional charge, “Dune” grossed $41 million at the domestic box office in its opening weekend, providing more evidence against the idea that streaming is a death sentence for film. Or at least for a certain kind of film.

The messaging I saw on social media that everyone should see “Dune” on the biggest screen possible, or don’t bother, seemed to resonate with audiences. Imax, Dolby and other “premium format” options accounted for about half the grosses in the U.S. and Canada. Roughly 22% came from Imax screens alone.

Total U.S.-Canada grosses exceeded expectations of $30 million to $35 million, and the film did about $900,000 better than the $40.1 million Warner Bros. preliminarily estimated on Sunday.

A $41-million opening isn’t a huge start for a movie that cost $165 million to make. But considering that it probably drew considerable viewership to HBO Max, it feels like a solid result for a complex science-fiction movie that runs more than 2½ hours. The proof will be if and when “Part II” gets the green light.

More stories from the week

— It’s still very, very good to be Duran Duran. The 1980s icons on getting COVID, plastic trousers and the new album. (LAT)

— 18 TV players reveal the platforms where they most want to sell shows. ‘It’s not the Netflix of 2 or 3 years ago.’ (Insider)

— Following up on the IATSE deal… Why Hollywood crews are giving mixed reviews on new contract. (LAT)

— The Golden Globes’ comeback is off to a confusing start. ‘It seems very messy.’ (Vanity Fair). And from LAT’s Stacy Perman: Golden Globes board expels reform-minded member over alleged ‘misconduct.’

— Author Helen Lewis on Netflix and Dave Chapelle: The comedian’s latest special blurs the line between victim and bully. (The Atlantic)

Thank you to everyone who sent in horror movie recommendations after last week’s edition. Picks included Alejandro Jodorowsky’s “Santa Sangre,” which I have seen but need to revisit. Separately, I saw Phoebe Bridgers play the Greek Theatre in Los Angeles last week and heard her cover of Bo Burnham’s “That Funny Feeling” for (somehow) the first time.