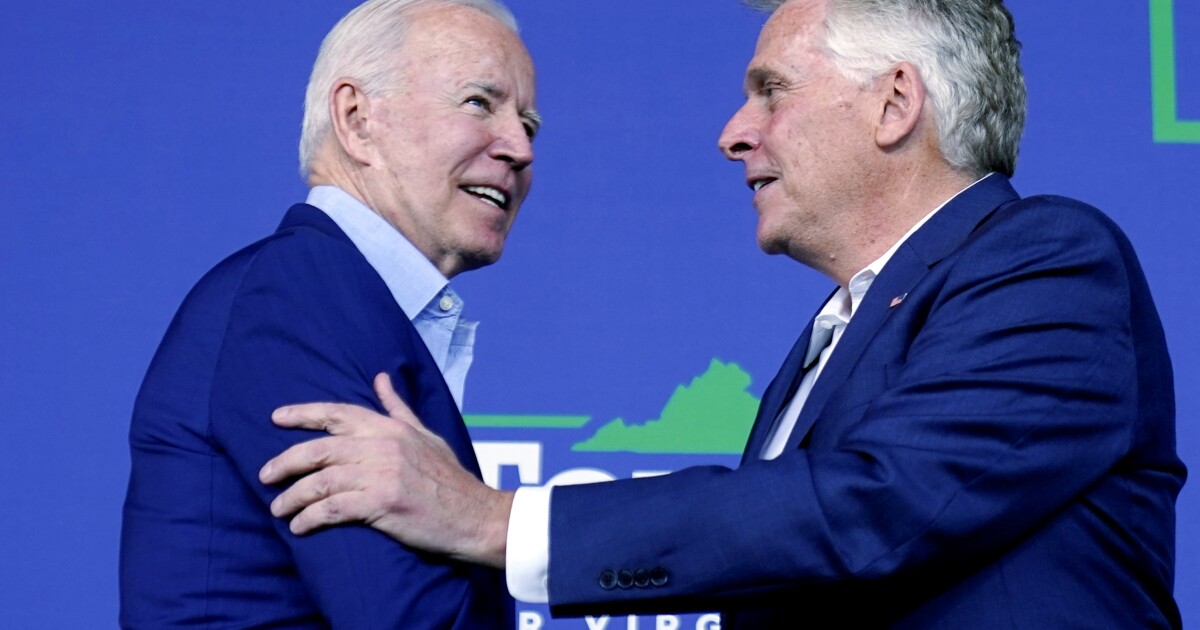 President Biden is heading across the Potomac River to campaign for Democrat Terry McAuliffe on Tuesday, in a tight and increasingly bitter Virginia governor’s race that will test the durability of his popularity in a state he won handily a year ago.

No Republican has won statewide office in Virginia since 2009, and Biden carried it by a comfortable 10 percentage points in 2020. Yet polls have shown McAuliffe, who previously served as governor from 2014 to 2018, tied with Republican former business executive Glenn Youngkin with the election a week away — and the president’s own popularity is on the decline.

In the final days of the race, both candidates are focused on turning out their base supporters, with Republicans pressing culture war issues — prompting a debate over banning books in high school classrooms — and McAuliffe hammering Youngkin for his ties to former President Trump.

A loss by McAuliffe on Nov. 2 — or perhaps even a narrow victory — would be an ominous sign for Democrats already likely facing stiff political headwinds in next year’s midterm elections, when their narrow control of the House and Senate will be on the line. The party that wins the White House historically losses congressional seats in the next election, and Virginia, this cycle’s top off-year race, is seen as a key test of whether Democrats can head into 2022 with momentum.

“We’ve been friends for decades. Terry and Joe Biden go back a long, long way,” McAuliffe’s wife Dorothy said in an interview during a Monday night campaign stop in the college town of Blacksburg. “It means a lot personally that he wants to come back again and be helpful.”

How much help Biden will offer McAuliffe is unclear, though. The president has seen the percentage of Americans approving of his job performance fall after the chaotic U.S. withdrawal from Afghanistan and amid an economy that remains far from fully healed as the nation continues to struggle with the COVID-19 pandemic.

On Monday, the Youngkin campaign released an ad featuring a mother who years ago sought to have the book “Beloved” banned from classrooms in suburban Washington. The acclaimed 1987 novel by Nobel laureate Toni Morrison is about an escaped enslaved woman who kills her infant daughter rather than allowing the girl to be returned to the plantation.

The mother’s advocacy led to state legislation McAuliffe vetoed in 2016 and 2017 that would have let parents opt out of having their children study classroom materials with sexually explicit content.

McAuliffe’s campaign and fellow Democrats blasted Youngkin’s ad and accused him of trying to “silence” Black authors, which McAuliffe said amounted to a “racist dog whistle.”

Youngkin has made defending “parental rights” in school classrooms a centerpiece of his gubernatorial run, and his campaign responded by noting that the bills McAuliffe vetoed had passed with Democratic support. It said that, by accusing Youngkin of playing racial politics, McAuliffe was effectively leveling the same charge at his own party.

That issue flared up hours before Biden was to speak at a park in Arlington, long safely blue territory. Other, nearby parts of the fast-growing Washington suburbs have moved Virginia from a onetime swing state to more reliably Democratic — especially as their populations of Black, Latino and Asian residents have increased.

The visit comes a day after the president traveled to New Jersey to boost Democratic incumbent Gov. Phil Murphy, who is up for reelection on Nov. 2. Biden said earlier this month that, “I think everybody understandably reads the two gubernatorial off-year elections as being a bellwether of what may happen” in future electoral cycles.

Biden, making his second trip to Arlington since McAuliffe launched his gubernatorial bid, is the latest in a parade of Democratic stars to flood the state, hoping to fire up the party’s base.

Vice President Kamala Harris will campaign for McAuliffe on Friday, her second stop in as many weeks. In Dumfries, about 30 miles south of Washington last week, Harris called the race “tight” and warned against Democratic complacency.

Youngkin planned stops in Clarksville and Danville, not far from the Virginia-North Carolina border, on Tuesday, part of a 50-stop bus tour. In contrast to McAuliffe, Youngkin, a former top executive at the private equity firm the Carlyle Group, has largely shied away from outside help from national Republicans, though he has been endorsed by Trump.

“This is no longer a campaign,” Youngkin said as he visited suburban Richmond recently. “This is a movement.”

Associated Press writers Sarah Rankin in Richmond and Steve Peoples in Blacksburg contributed to this report.

Previous Unvaccinated L.A. city workers get more time to get shots
Next Ben Simmons is selling his N.J. mansion for $5 million