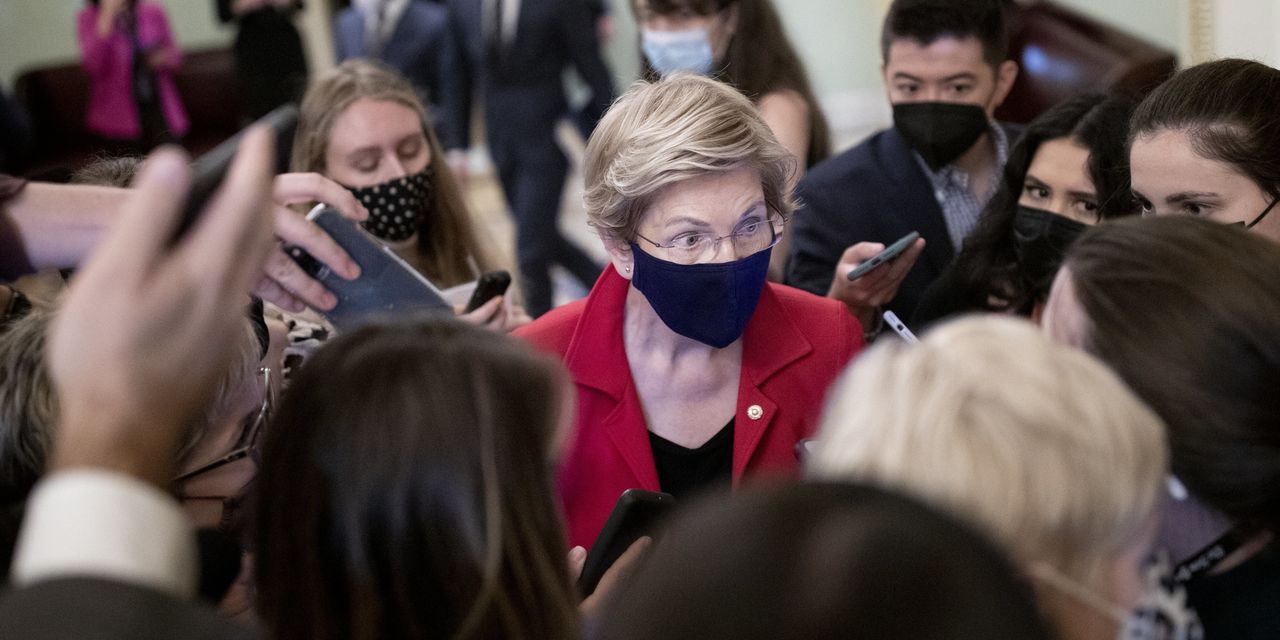 WASHINGTON—Senate Democrats announced a 15% minimum tax on large companies’ income on Tuesday, refreshing an earlier revenue-raising proposal as they try to generate enough money to pay for President Biden’s social-spending and climate-change agenda.

(D., Ore.) would affect about 200 companies and could raise hundreds of billions of dollars, the sponsors said. It isn’t clear yet what will be in the final plan, and the late-emerging proposals have encountered resistance among Democrats, while Republicans continue to be unified in opposition to the Biden agenda.

The plan is designed to raise money from companies without raising the 21% corporate income-tax rate. Democrats had long thought they could raise that rate—set in the 2017 Republican tax law—to at least 25%. The House Ways and Means Committee in September approved about $2 trillion in tax increases without using a corporate minimum tax, instead relying on increases in marginal tax rates on corporations, individuals and capital gains.

(D., Ariz.) to the tax-rate increases sent lawmakers searching for alternatives as they attempt to cobble together money to cover nearly $2 trillion in spending over a decade. Ms. Sinema backed the idea Tuesday as a “common-sense step.”

In addition to the corporate minimum tax, Senate Democrats are also proposing to impose annual taxes on billionaires’ unrealized capital gains; new details on that idea are expected soon.

In a narrowly divided Congress, Democrats need every member in the Senate to back the same plan to succeed in a party-line vote and can only afford to lose a few members of the House.

“I’m open to entertaining some revenue measures as they become understandable in legislative text and people actually have a chance to vet them the way we did,”

Companies such as domestic retailers that are mostly affected by the corporate tax rate wouldn’t get hit much by a minimum tax, because they get few breaks and already are paying higher than a 15% rate.

Conversely, manufacturers and tech companies could be among those hardest hit by the plan, because the tax breaks they currently benefit from, such as expensing capital investments or stock options, would effectively be limited. If they get too much of a benefit in any year, the minimum tax would kick in, and they would have to pay some of the tax they otherwise would have avoided or deferred.

The 15% corporate minimum tax proposed on Tuesday is different from the 15% global minimum tax the U.S. has been pushing in international negotiations. That latter plan, which is also likely to be included in the Democrats’ tax-and-spending bill, is focused on U.S. companies’ foreign income and would require them to pay at least 15% in each foreign country where they operate. Some companies could be affected by both taxes.

Tuesday’s proposal would impose a 15% minimum tax on companies with at least $1 billion in profit on their financial statements—about 200 companies, according to a summary released by the sponsors. Affected companies would still receive the benefit of a range of tax credits available to businesses, including breaks for spending on research and development, affordable housing and clean energy initiatives that would let them push their tax rates below 15%.

The proposal’s sponsors also promise some flexibility for companies, such as net operating loss deductions to smooth profits and losses over time. They also account for foreign taxes paid and give credit for prior minimum-tax payments when calculating regular corporate income taxes in future years, the sponsors said.

Critics argue that the minimum tax would undermine tax incentives that work well to encourage corporate investment and economic growth.

“A tax on book income is a backdoor erosion of a host of preferences in the tax code,” said Rohit Kumar, Washington national tax services co-leader at tax and accounting firm PricewaterhouseCoopers. Mr. Kumar is a former aide to

(R., Ky.). “You’re going to create winners and losers based on tax attributes.”

In some ways, the new minimum-tax proposal would re-create a version of the alternative minimum tax that was scrapped in 2017, but would start not from each company’s tax-return figures, but from their financial-statement results.

Minimum taxes can be politically attractive because they go directly after a phenomenon President Biden has decried on the campaign trail: profitable companies paying little or nothing in income taxes. And they can be easy to explain to voters in broad strokes.

But minimum taxes can also be clunky, because they often mean that Congress creates incentives in the regular tax system and then takes away at least some of their benefit from taxpayers that use them too much. Supporters say minimum taxes ensure that taxpayers don’t take undue advantage of complex incentives; critics argue it would be better to fine-tune the existing incentives instead.

The tax also tends to hit companies that have a gap between the income they report for tax purposes and what they report on their financial statements under generally accepted accounting principles.

That can arise for several reasons. Notably, companies that make capital investments are allowed to take immediate tax deductions for the full cost but must spread the accounting expense over several years, which tends to leave them with relatively low tax rates compared with their financial-statement income in the current year and leave them subject to be hit by the minimum tax.

As a result, the minimum tax could effectively limit the incentive companies have to invest in capital projects by limiting the benefit they get from immediate expensing, Mr. Kumar said.

“The net result is, oh, you have too big of a depreciation deduction this year? We’re going to take some of it back,” he said.

But there is little evidence that immediate expensing significantly encourages more investment, said Steve Wamhoff, director of federal tax policy at the Institute on Taxation and Economic Policy, a progressive think tank in Washington

That may be in part because a key audience for corporations—their investors—typically watch net income and per-share earnings, which aren’t affected by immediate expensing.

“Everyone assumes it’s going to encourage investment—there’s not really any evidence that it does,” Mr. Wamhoff said.

—Siobhan Hughes contributed to this article.

Write to Richard Rubin at richard.rubin@wsj.com and Theo Francis at theo.francis@wsj.com

Previous World News | Microsoft Profit Up 24 Pc in Quarter, Driven by Cloud Growth
Next Robinhood Revenue Falls on a Drop in Crypto Trading