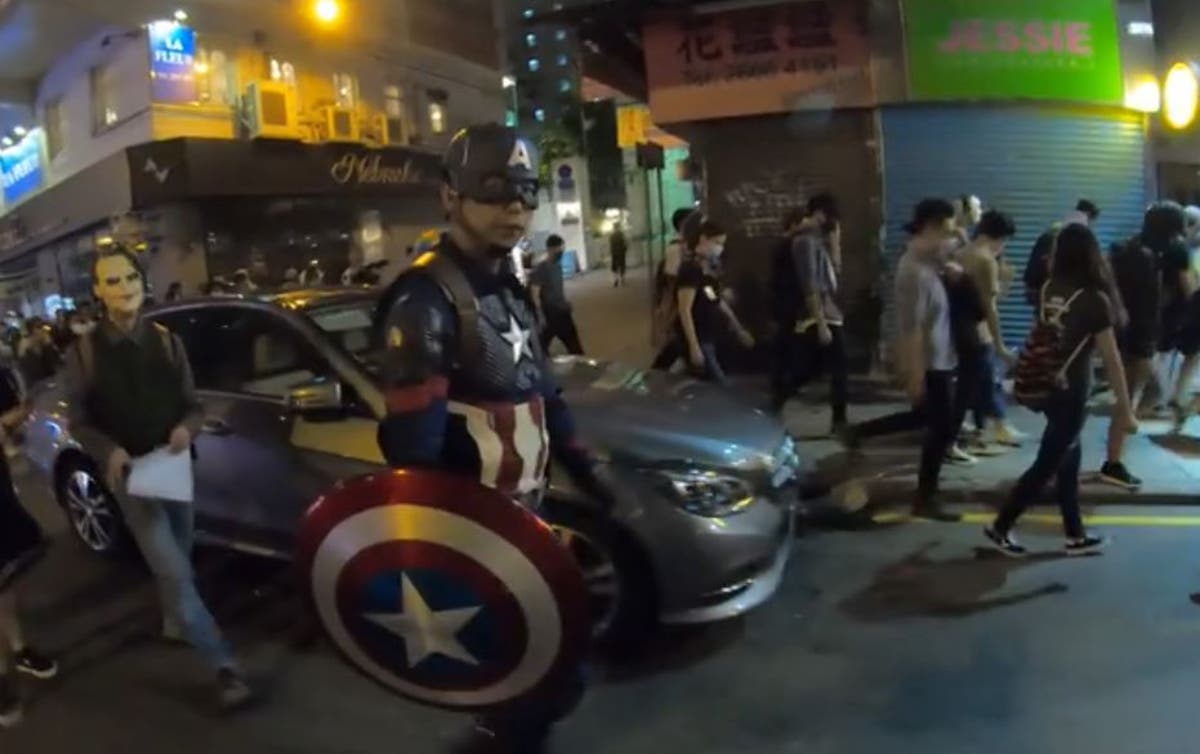 Ma Chun-man, 31, was convicted on Monday after he was found to have chanted slogans such as “Hong Kong independence, the only way out” on at least 20 occasions between August and November last year.

The former food delivery worker faces up to seven years in prison after being found guilty on one count of incitement to secession. Mr Ma’s sentencing is scheduled for 11 November.

Mr Ma has often been called “Captain America 2.0” for wielding the popular Marvel superhero’s shield during protests. A notebook titled “Captain America’s Diary of Resistance” has also been seized from the activist, who has been arrested multiple times for shouting pro-democracy slogans.

Mr Ma’s lawyer Edwin Choy told the court during arguments that Mr Ma had only wanted to exercise his right to free speech and they were merely “empty slogans” that were never acted upon. But the judge did not agree.

“I believe the defendant was sincerely stating his stance when he chanted slogans in the hope that others would participate,” district court judge Stanley Chan said, according to Bloomberg.

Critics have slammed Beijing for implementing the controversial National Security Law, which threatens the freedom of expression. Beijing has been accused of using the law to crack down on rights and pro-democracy activists in the wake of the 2019 Hong Kong protests.

Under the law, which was implemented in 2020, crimes of secession, subversion, terrorism and collusion with foreign forces are punishable by a maximum sentence of life imprisonment. Since June 2020, more than 120 people, including opposition leaders and journalists, have been arrested under the new law.

Tong Ying-kit, the first person to be convicted under the law, was sentenced to nine years in prison for inciting secession and terrorism. The 24-year-old drove his motorcycle into a group of police officers last July while bearing a flag with the banned slogan “Liberate Hong Kong, revolution of our times”.

Meanwhile, rights group Amnesty International said on Monday that it would close its Hong Kong offices owing to the mounting pressure from Beijing and the security law.

“This decision, made with a heavy heart, has been driven by Hong Kong’s national security law, which has made it effectively impossible for human rights organizations in Hong Kong to work freely and without fear of serious reprisals,” the chair of Amnesty’s international board Anjhula Mya Singh Bais said.