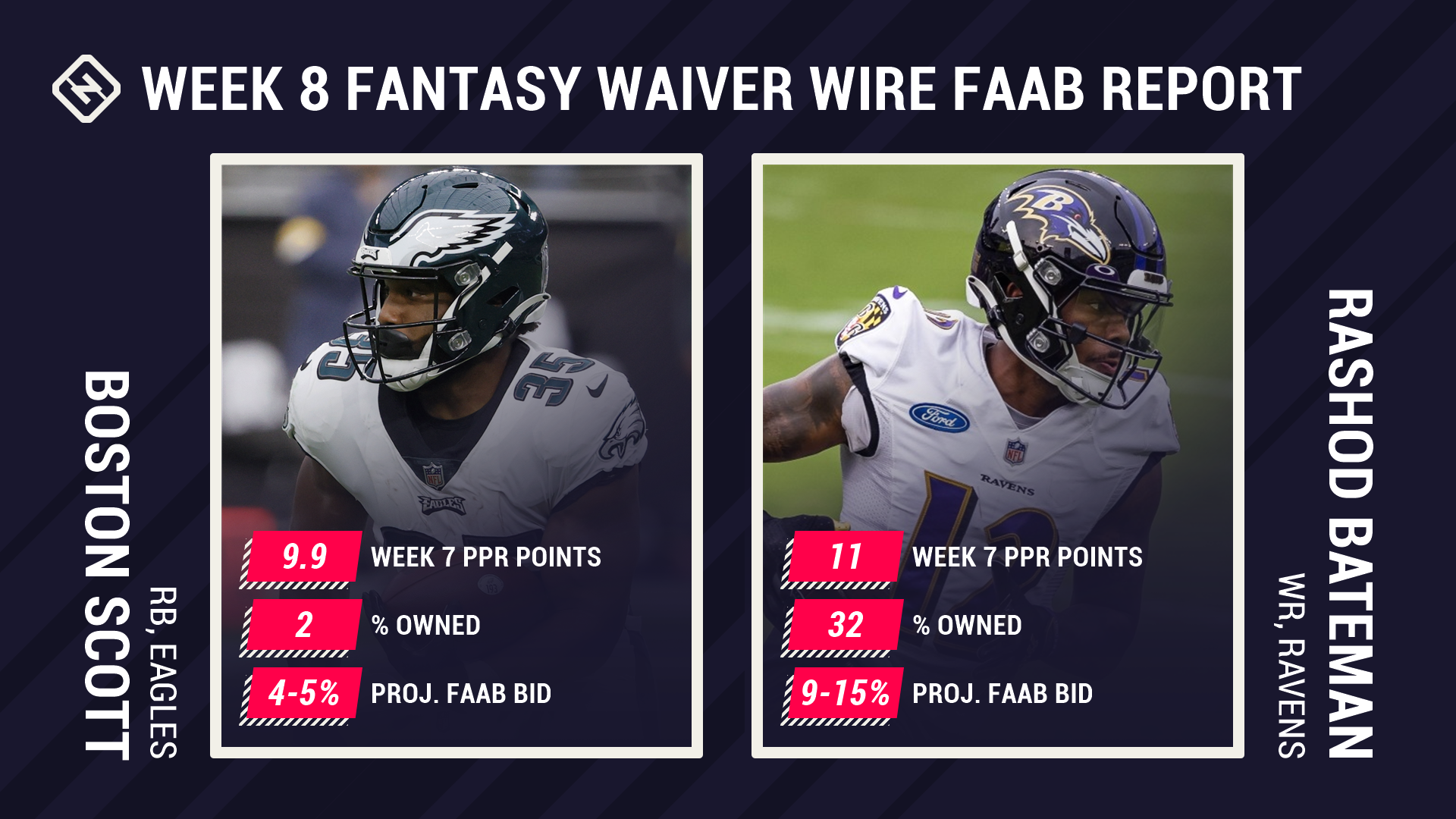 It’s a good thing just two teams are on bye this week (Ravens, Raiders) because it’s slim pickings on waivers. Oh, there are plenty of potential free agent adds and Week 8-specific streamers, but the viable waiver wire pickups are few and far between. Still, a couple guys, such as Kenneth Gainwell, Boston Scott, Rashod Bateman, Allen Lazard, and maybe Deshaun Watson, will require claims or decent-sized FAAB bids, so you need to have your budget in order before deciding how much to spend.

As we’ll do every week this season with the help of our friends at Fantasy Alarm, let’s break down the top pickups and project how much of your FAAB budget you should bid on them.

DOMINATE YOUR LEAGUE: Get the Fantasy Alarm NFL Season Pass!

Carson Wentz (IND). Wentz is one of my favorite streamers in Week 8. Tennessee’s secondary is horrendous. Patrick Mahomes had a rough week against the Titans because his offensive line couldn’t stop the pass rush. The Colts have a far better offensive line that can provide Wentz ample time to move the ball down the field. Wentz’s Sunday night performance was mostly salvaged by a rushing touchdown. But the offense still looked fine even in ugly weather conditions, and he’s thrown multiple touchdowns in four straight games. He could finish next week as a top-12 quarterback. Projected FAAB Bid: 5-6% of total budget

Daniel Jones (NYG). If you’re missing out on Derek Carr and Lamar Jackson in Week 8, Jones might be the best streaming option available. Obviously, you hope some of his weapons are back this week against the Chiefs. This game could be ugly, but whether the Giants keep pace or are playing from behind, Jones should put up points. We just saw Ryan Tannehill put up over 20 fantasy points on them, and the Chiefs defense has been torched all year long. Hopefully, Jones can get a little going with his legs, which have sort of disappeared since the beginning of the season. Either way, 40-plus pass attempts aren’t out of the question next Monday night. Proj. FAAB Bid: 5-6%

Deshaun Watson (HOU). Rumors are swirling about a few teams looking to trade for Watson. Miami, Philadelphia, and Carolina have all been in the mix, and with the NFL’s trade deadline coming up next Tuesday we can only expect these rumors to intensify. If you can stash him for cheap, feel free to do so. He hasn’t been suspended by the NFL (yet), and his off-field issues could very well be settled out of court in civil suits. He’s available in over 80 percent of leagues at the moment. If he’s dealt and immediately steps in as that team’s starter, then you’ve found a top-10 quarterback rest of season on the waiver wire. If a deal can’t fall into place then he sticks with Houston the rest of the year and doesn’t play, in which case you drop him back to the free agency pool for nothing. Proj. FAAB Bid: 1-2%

Kenneth Gainwell and Boston Scott (PHI). Most will be trusting the rookie Gainwell over Scott, although Scott actually got more carries and found the end zone after Miles Sanders (ankle) was hurt (Gainwell scored before Sanders’ injury). Scott needed three tries late in the game to punch it in, so take that for what it’s worth. Gainwell and Scott are both smaller running backs who excel in the passing game, but given that Gainwell was the player selected by this coaching staff, we can make a fair prediction that he’d see more work if Sanders needs to miss time. However, this isn’t a trustworthy backfield given how awful the Eagles have looked this season. Projected FAAB Bid: 8-10% of total budget for Gainwell; 4-5% for Scott

Devonta Freeman (BAL). This offense looked completely lost in Week 7. Baltimore couldn’t keep pace with Cincinnati, and truthfully, the Ravens offensive line needs help. Ronnie Stanley is done for the year again and Lamar Jackson was running for his life (to the tune of 88 rushing yards). Freeman totaled just 14 yards on four carries, but he did find the end zone and he added three catches, as well. It’s to feel great about Latavius Murray (ankle injury), Ty’Son Williams (multiple inactives), or Le’Veon Bell. If you’re looking for a Ravens running back to own, it’s currently Freeman — but with a bye in Week 8, even that’s not a very exciting prospect. Proj. FAAB Bid: 6-7%

Brandon Bolden (NE). Take this suggestion with a grain of salt, as you should with any Patriots running back that is mentioned in a waiver wire column. Bolden was the pass-catching back on Sunday with Rhamondre Stevenson inactive. Bolden caught six passes for 79 yards and found the end zone, but let’s keep in mind the circumstances surrounding this game: Stevenson was out, they were playing the Jets, and Bolden received just two carries. Is he worth a grab in PPR leagues? Maybe only in leagues with 12 teams or more. And even if you do pick him up, how confident are you in starting him? Proj. FAAB Bid: 5%

Rashod Bateman (BAL). The Ravens are on bye this coming week, so it’s unfortunate you won’t get any usage out of Bateman until Week 9 potentially. However, he’s looked like the real deal, and following the team’s week off we could see more production from him. He has just seven catches to his name, but they’ve all gone for first downs. The big-play potential is there. It’s hard to imagine he’ll get more looks than Marquise Brown or Mark Andrews, but if defenses are keying in on those two, Bateman could get more targets in general. A potential return of Sammy Watkins (hamstring) could eat into his target share, but Bateman still makes for a nice upside stash. Projected FAAB Bid: 10-15% of total budget

Allen Lazard (GB). Lazard is a nice short-term option to consider for the coming scoring period. He’s scored in back-to-back weeks, is tied for the team lead in targets, and ran plenty of routes. A slight concern going forward will be the return of Marquez Valdes-Scantling (knee), but the Packers play Arizona on Thursday, so given the short week, it’s doubtful MVS is available in Week 8. Lazard could make for a decent flex play if you’re beat up at wide receiver. Davante Adams was also placed on the COVID-19 list Monday afternoon, so with the short week it becomes difficult to gauge his availability, but if he doesn’t go that’s a boost to every Packers pass catcher. Green Bay has three favorable passing matchups after that, too (KC, SEA, MIN). Proj. FAAB Bid: 10%

Darius Slayton (NYG). The Giants appear to be the team that will be plagued by the injury bug this season, especially on offense. Kenny Golladay (knee), Sterling Shepard (hamstring), Kadarius Toney (ankle), Saquon Barkley (ankle), etc. have all been impacted. Most will inquire about Dante Pettis, and he’s worth an add in deeper leagues, but Slayton is the more proven player with the organization. He also led the team in receiving yards and targets this past week. Slayton should be heavily involved if the Giants are without some of their pass-catchers next week as they take on the Chiefs in prime time. Proj. FAAB Bid: 6-7%

Kalif Raymond (DET). Raymond might be better suited in deep leagues because there’s not a lot of raw talent here. But in terms of workload and his involvement with the offense, he’s in a good spot right now. Sunday marked his second straight game with six catches, and he’s been running the most routes on the team. He does tend to make a few mistakes, and he’s undersized, but for now, he’s emerging as a reliable weapon for Jared Goff that warrants consideration in deep leagues. Proj. FAAB Bid: 5-6%

Russell Gage (ATL). It will be hard to trust Gage on a weekly basis, but in his return from injury he logged four catches on six targets, including a fantastic 49-yard touchdown catch to open the second half. He’s probably nothing more than a flex play in 12-team leagues, but if he’s seeing at least six targets each week, then he should be rostered even if it’s just for depth. The Falcons’ past four games have come against the Giants, Washington Football Team, Jets, and Dolphins, but it looks like this offense could finally be hitting its stride with Arthur Smith’s scheme, which is great timing because the schedule does get a little more challenging going forward. Proj. FAAB Bid: 3-4%

C.J. Uzomah (CIN). Here is a perfectly fine streaming tight end if you have Darren Waller or Mark Andrews out this coming week. Uzomah has scored five touchdowns over his past four games on just 14 targets. You read that right. That kind of inefficiency is wildly unsustainable, but he’s caught all but two of his targets on the season. He’s also running routes on a consistent basis. He’s not a top two pass-catching option in this offense, but he is active and has clearly shown big-play ability. Projected FAAB Bid: 5-7% of total budget

Evan Engram (NYG). I feel like “Eyeroll” is a good nickname for Engram among the fantasy community. Anytime he’s mentioned as a waiver acquisition there’s a collective grumbling. He has that first-round pedigree, which might mean nothing at this stage of his career; however, with so many injuries on the Giants offense, Engram has been involved in the passing game. He just hasn’t been scoring or producing massive numbers. He’s averaging about six targets per game over his past five appearances, but he hasn’t topped 60 yards receiving. But remember, this is a fairly touchdown-dependent position. Uzomah is a guy finding the end zone on minimal targets. Over the same four-game span that Uzomah has five touchdowns on 14 targets, Engram has 18 catches on 23 targets but zero touchdowns. So, while the Giants continue to play without some of their top receivers, there’s opportunity for Eyeroll Engram. Proj. FAAB Bid: 5-6%

Pat Freiermuth (PIT). Freiermuth was mentioned last week as a tight end worth adding, and he should be even more sought after now that the Steelers are coming off their bye week. In the first full game without JuJu Smith-Schuster, Freiermuth set season highs in snaps (60 percent), targets (7), receptions (7), and yards (58). It’s not necessarily a fluke because when JuJu Smith-Schuster (shoulder) was injured in Week 2, Freiermuth saw increased usage in that game, as well. Proj. FAAB Bid: 2-3%

As we always caution, you shouldn’t spend more than one percent of your FAAB budget on a D/ST. Here are this week’s potential streaming pickups: