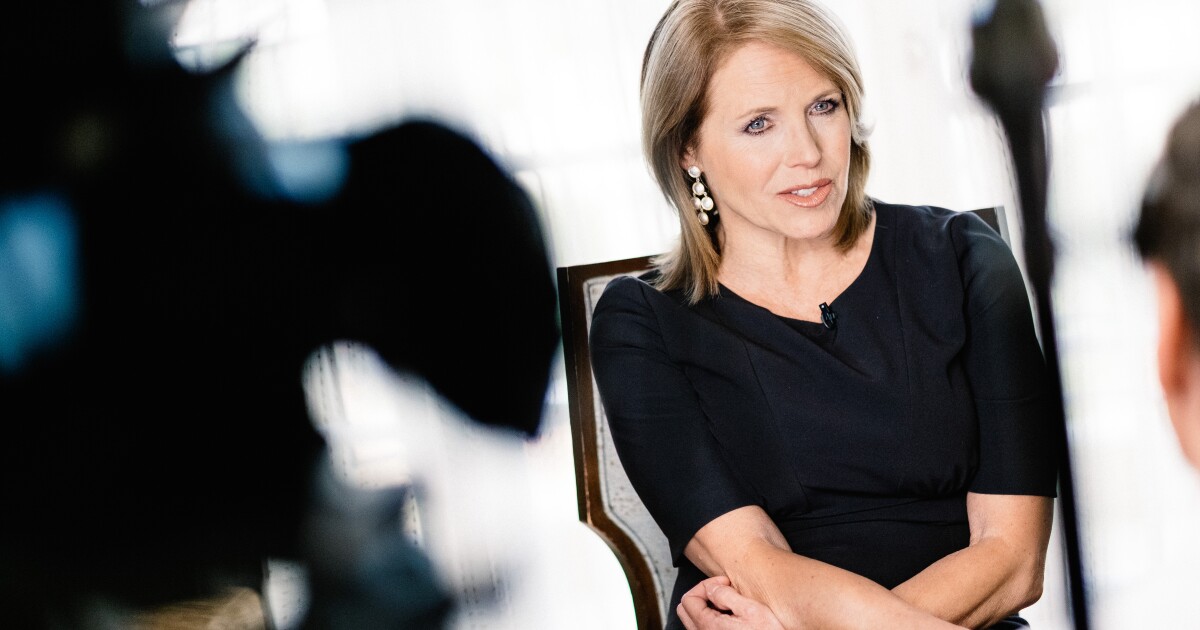 In Katie Couric’s new memoir “Going There,” the TV news star recalls a question asked by her therapist. “Have you ever considered that maybe not everyone is going to like you?”

Couric admits that she hadn’t. She was a “pleaser” since childhood, “a master of recruiting people to team Katie.”

The breakthrough moment clearly stuck with her. There is no relentless people-pleasing in her fearlessly frank memoir, a wildly entertaining and often emotional ride through the volatile media landscape of the last 40 years in which no subject is off limits.

Couric, 64, puts herself among the generation of career-oriented woman inspired by “The Mary Tyler Moore Show,” but she was in a class of her own. Hard-working and extroverted, she over-delivered at every turn, keeping NBC’s “Today” show No. 1 in the ratings for 16 years. She also stood up for herself, demanding an apology from CNN executive Ed Turner, who said she was hired for her breast size, and telling Bob Wright, then vice chairman of NBC parent General Electric, to back off when he said she was too aggressive in questioning his Bush White House pals.

Couric arrived at NBC News as a serious journalist, having quickly learned her craft in local TV and on CNN during its rollicking startup years. But she was almost too good at the entertainment elements of morning TV — crooning along with pop stars, dressing up for Halloween and diving head-first into any ratings-driven stunt.

Being described as “perky” and “America’s Sweetheart” overshadowed her real accomplishments as a journalist capable of hard-hitting interviews. It also made her a favorite target for the tabloids and the long lenses of paparazzi.

This much hasn’t changed: Couric has been pilloried in the press over early leaks of “Going There,” in which she admits she was not the mentoring kind at “Today.” It’s understandable she would want to protect her turf; every woman who made a strong impression at NBC News was touted by the press as a replacement. (Of course, the three network news anchors of that era, Dan Rather, Peter Jennings and Tom Brokaw, had no part in grooming their successors).

But Couric knew she could be taken out the same way she came in. Her remarkable rise occurred after NBC News famously botched the transition of Jane Pauley from the program in 1989. When ratings dropped among younger women, Pauley — then just 39 — was the first one thrown overboard. When her younger replacement Deborah Norville couldn’t right the ship, management turned to Couric in 1991.

Couric’s starry run at “Today” elevated the stature of morning TV while the influence of the evening news was waning. But as a baby boomer raised on “The Huntley-Brinkley Report,” she couldn’t resist the chance to join CBS in 2006 as the first solo woman to serve as an evening news anchor.

She was warned not to do it; Warren Beatty, of all people, said mornings were more important. But she could not pass up the opportunity to make history.

Couric was not welcomed by the traditionalists at CBS News, especially as she was pulling in $15 million in a season of cost-cutting. She admits her spiffed-up office in the dreary CBS Broadcast Center “stuck out like a Givenchy gown at a hoedown.”

Her attempt to reinvent the evening news didn’t click with audiences, but Couric’s 2008 interview with Republican vice presidential candidate Sarah Palin was one of the all-time game-changing moments in politics. It silenced her critics long enough for her to work through her contract at the network.

Despite early reports, Couric doesn’t really go over the top in her critiques of former colleagues at NBC. The brunt of her barbs are aimed at CBS. If you’re a producer or executive who worked with her there and don’t see your name in the index of “Going There,” consider yourself extremely fortunate.

Couric is particularly rough on former “60 Minutes” executive producer Jeff Fager, who was not a fan of her work. She takes credit for directing journalists on the #MeToo beat to investigate Fager’s alleged inappropriate behavior toward women at the company, which ultimately led to his demise. She uses two vulgar terms for male genitalia to describe him.

Couric provides a historical perspective on workplace relationships, noting that “no one batted an eye” in the 1980s when ABC News correspondent Sam Donaldson showed up at her apartment door for a date with one of her young roommates, who also worked at the network’s Washington bureau. Couric herself dated an older separated director while at CNN. She describes a secret office at NBC known as “The Bunker,” to which the only one with a key was “a male anchor who used it for one-on-ones and I don’t mean interviews.” Let the speculation begin.

Couric also provides a deftly written tick-tock on her reaction to the downfall of her longtime co-anchor Matt Lauer. It’s compassionate without excusing his behavior, to which she was admittedly oblivious when she worked with him.

But civilians who read “Going There” will be most transfixed by Couric’s raw and unvarnished account of losing her first husband, attorney Jay Monahan, to colon cancer at the age of 42.

After attempting to be the have-it-all career mom, Couric questions whether the self-involvement required to succeed at “Today” kept her from noticing Monahan’s weight loss and jaundiced complexion, signs he was seriously ill. She shares the resentment she began to feel over Monahan embarking on a TV career as a legal analyst. Their truncated union is a subject on which the ever-confident anchor expresses the most self-doubt.

Couric used her clout as a celebrity to find doctors and treatments to save Monahan. She was too late, but she did succeed at turning her platform at “Today” into a megaphone, shifting public attitudes by having a colonoscopy on “Today” in 2000. It remains a remarkable milestone of persuasion when you consider how difficult it’s been to convince many Americans to get vaccinated against a deadly pandemic.

Couric balanced the desire to preserve her husband’s memory for their two daughters while trying to find a new companion. In 2014 she married financier John Molner, but only after his own harrowing cancer surgery.

In a jaw-dropping coda, Couric and her younger daughter Carrie reexamine Monahan’s obsession with the Confederacy. A native Virginian, Monahan participated in Civil War reenactments and collected memorabilia from the era. “I know it sounds like an excuse to say it was a different time,” Couric writes. “But — it was a different time. And Jay never got the chance to live in this one.”

Many of Couric’s former colleagues — especially those who knew her as an extremely demanding on-air talent — are likely to take issue with their depictions in “Going There.” They are already wondering why she chose to torch the infrastructure that might lead her back to TV.

The guess here is that she knows she is among the last generation of TV stars recognized by their first names. Multiplying sources of video streaming continue to slice and dice the mass audience. The kind of media fame she experienced simply won’t be replicated (sorry, podcasters).

Couric, who says she passed on a chance to host a show on MSNBC in 2016, was a polarizing figure before polarization was the norm in TV news. One need only witness the overheated reaction to her decision to shorten up the late Supreme Court Justice Ruth Bader Ginsburg’s off-brand rant about Colin Kaepernick to surmise that Couric has likely had enough.

When taking on projects for her own media company, Couric now sticks to covering topics she cares about. She misses the pulsating energy of a big news organization but seems at peace with herself and the sometimes messy, always interesting life she has lived. “My success may have come with a side of BS,” she writes. “But I like to think it did some good.”