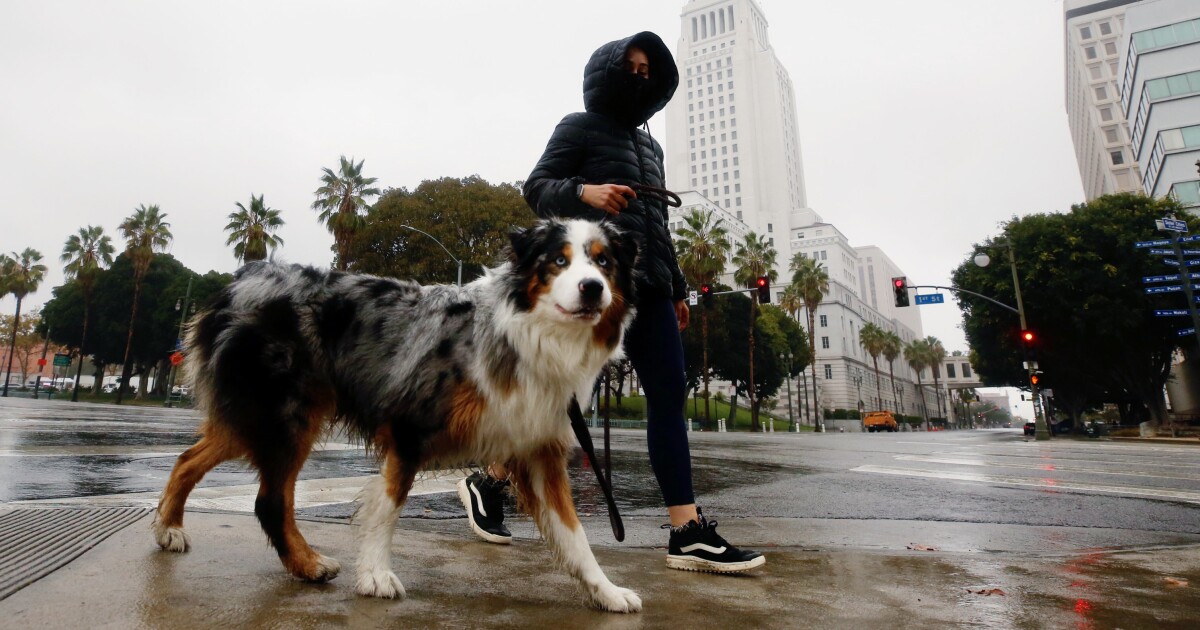 The storm that hit Southern California on Monday broke rainfall records as it swept down from the north and delivered much-needed moisture to areas parched by drought.

A low-pressure system hovering some 200 miles off the coast of Seattle sent a cold front hurtling all the way to the Southland, battering the area with significant rain for the first time in seven months.

The storm topped out at a 943-millibar pressure level, which is exceedingly low and signifies “a very intense storm,” said David Sweet, a meteorologist with the National Weather Service in Oxnard.

“Seeing that in October is very impressive,” he said.

Parts of Los Angeles County recorded up to 1 1/2 inches of rain. Just under one-half inch fell over downtown L.A., according to the National Weather Service. The foothill communities saw even more moisture, with Pasadena receiving 1.11 inches and nearby La Cañada-Flintridge doused with 1.32 inches.

The mountains in particular were pummeled by precipitation, getting more than 5 inches in some spots. Opids Camp, a typically rainy spot perched roughly 3,600 feet above Pasadena, recorded 2.63 inches of rain. Rocky Butte, tucked in the Santa Lucia Mountains of northwestern San Luis Obispo County, was walloped with 5.71 inches.

Weather officials were bracing for the downpour, and “it basically delivered on what was expected,” Sweet said.

Several records were shattered by the powerful storm, noted for its intense strength and relatively early arrival in the rainy season.

Paso Robles Airport, which recorded 1.54 inches, smashed its record of 0.18 inches set in 1950. Santa Maria Airport similarly crushed its record after receiving 1.28 inches, surpassing the 0.3 inches that fell in 1951.

Powered by a fierce atmospheric river, the storm wreaked havoc in Northern and Central California over the weekend before pushing into the southern part of the state.

Some northern areas were pummeled with up to 10 inches of rain, and records were shattered there as well.

City officials said the precipitation totals represented even more than a “200-year storm level,” which occurs at 4.6 inches and has a 0.5% chance of occurring in any given year.

And in the San Francisco Bay Area, the 4.02 inches of rain that fell Sunday marked the wettest October day in downtown San Francisco, and the city’s fourth-wettest day in recorded history.

Now that skies have cleared in Southern California, a warming trend is expected to follow, weather officials said. Sunny conditions are expected throughout the remainder of the week, and some areas could reach the low 80s by Thursday when Santa Ana winds are forecast in the morning.

The wind event has the potential to trigger an advisory, Sweet said.