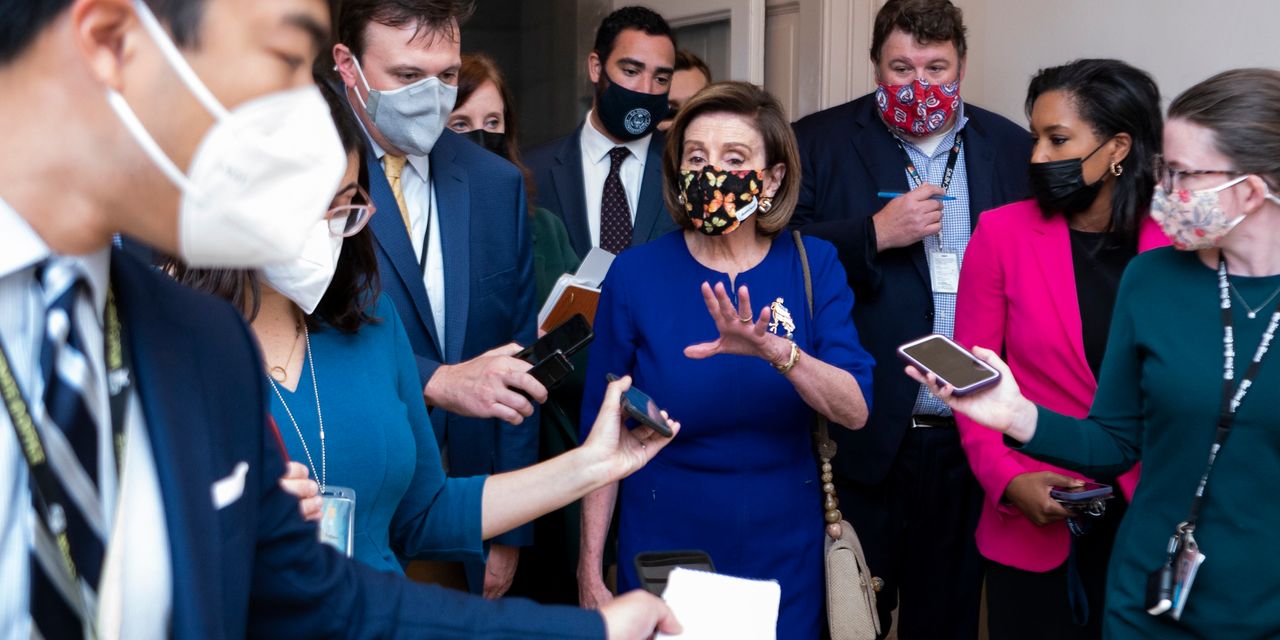 (D., Ariz.), who is opposed to the increases in the top marginal rates on companies, capital gains and personal income that the party planned to rely on to finance the bill. With Republicans opposed to the package, Democrats need unanimous support to pass the legislation in the 50-50 Senate and can afford to lose only a few votes in the House.

said Mr. Biden would host lawmakers at the White House Tuesday to discuss the package, now expected to cost around $1.75 trillion. Some Democrats continued to insist a framework deal was imminent even as they sorted through the tax issues and debated unresolved healthcare and climate provisions.

The White House and other top Democrats are now looking at a tax on billionaires’ unrealized gains as well as minimum tax on corporate book income, the profit companies publicly report in their financial statements. Ms. Sinema appears open to those ideas, according to people familiar with the talks, and another pivotal centrist, Sen. Joe Manchin (D., W.Va.), has indicated support for them.

But the alternatives continue to face skepticism among other Democrats, who have raised questions about how an annual tax on billionaires’ unrealized gains would apply in practice.

(D., Conn.) said he was concerned about how the tax would work when billionaires lose money.

“There are 20 other better ways and more workable ways to get the wealthy to pay their fair share than what feels to me like a [public relations] initiative,” Mr. Himes said.

Lawmakers hope to pair the alternative measures with enhanced tax enforcement at the Internal Revenue Service and a tighter net on U.S. companies’ foreign earnings. Mr. Manchin said he told Mr. Biden that he opposes a proposal to require banks to send to the IRS more information about customers’ accounts to help the agency find tax cheats. Democrats last week moved up the key threshold to $10,000 from $600 and said they would create exemptions for payroll and benefits deposits in the face of widespread attacks from Republicans and banks.

“I said ‘Mr. President, I don’t know what happened. This cannot happen. It’s screwed up,’” Mr. Manchin recounted at an interview Tuesday at the Economic Club of Washington, D.C. “He said, ‘I think Joe’s right on this one.’ So I think that one’s going to be gone.”

Removing that provision would leave a hole of at least $200 billion in the Democrats’ plans. The White House didn’t immediately comment on Tuesday.

Mr. Manchin said he did think the IRS would be given a bigger budget to modernize their computer systems and “be able to do what they’re intended to do.”

A minimum tax on corporations’ book income and an increase in tobacco taxes also face pockets of resistance among Democrats, according to House Ways and Means Chairman

Securing an agreement on the tax measures is an essential step in Democrats’ quest to reach an agreement on the social-spending and climate bill. Party leaders hope to secure a deal this week, giving Mr. Biden a legislative victory as he heads abroad, and unlocking the political support for a separate, roughly $1 trillion infrastructure bill.

Mr. Biden is traveling to Europe for a meeting with Group of 20 leaders in Rome and then a climate summit in Glasgow, Scotland.

Progressive Democrats have demanded a deal on the social-spending and climate legislation before a vote on the public-works bill, which would reauthorize transportation programs set to expire on Oct. 31. Congressional Progressive Caucus leadership has recently contacted members to gauge their support for voting on the infrastructure bill after Democrats reach a framework on the social-policy and climate bill, according to a person familiar with the outreach.

Democrats are also haggling over many of the spending measures in the legislation, including its healthcare, climate and paid leave provisions. A paid leave program, initially designed to last 12 weeks but later cut to four weeks, is in danger of falling out of the bill, according to aides familiar with the talks.

Sen. Kirsten Gillibrand (D., N.Y.), who has authored paid leave legislation, said she is talking to Mr. Manchin to ensure paid leave makes it into the final package. She said she was exploring a proposal that would have employers and employees contribute to funding the leave.

“I’m hoping to work with him on an employer-employee matching plan. That’s something he’s very interested in,” Ms. Gillibrand said.

While the legislation is far smaller than the $3.5 trillion bill that Democrats initially outlined, it is still set to include several party priorities, such as universal prekindergarten and an expanded set of tax incentives for transition to clean energy. House Speaker

(D., Calif.) told House Democrats on Tuesday that “no bill is everything,” and Congress was on “the verge of something major,” according to a person familiar with her message.

“Let me know if you have any unease because we need to have a very strong vote,” she said, according to the person familiar with her message.

—Lindsay Wise contributed to this article.