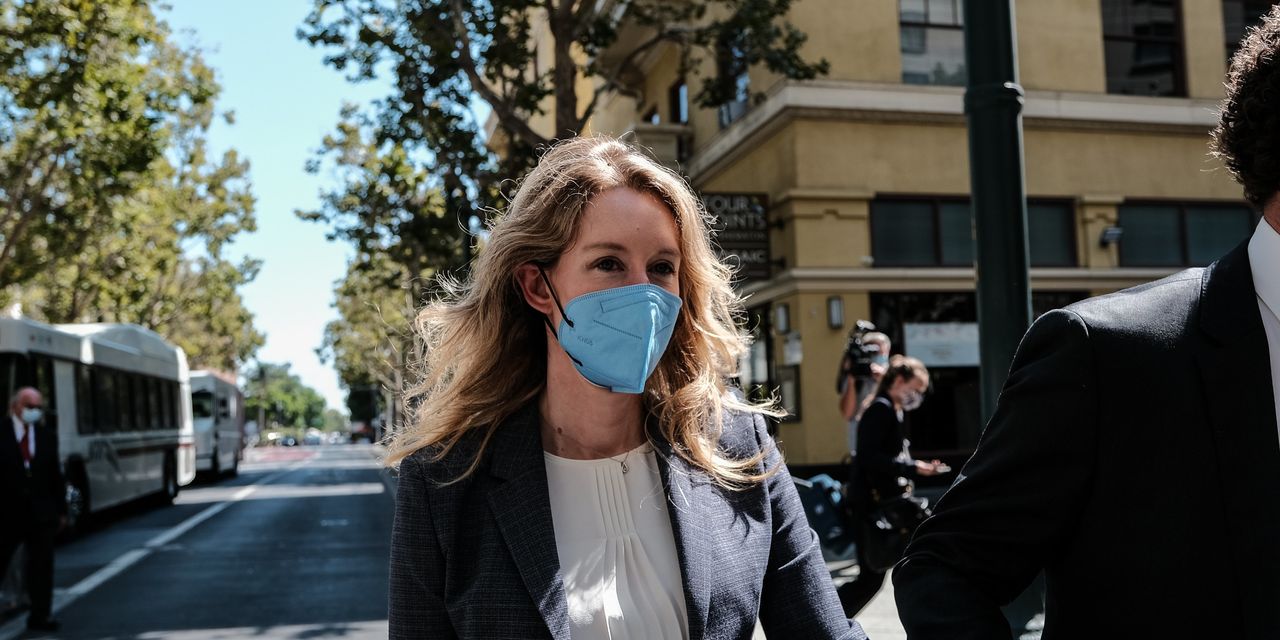 prosecutors have shown that her startup Theranos Inc. took shortcuts when claims about its revolutionary blood-testing technology became scientifically unfeasible and that employees feared retaliation for raising concerns.

Roughly halfway into a trial scheduled to run until mid-December, jurors have heard from a patient who said Theranos blood tests incorrectly led her to believe she was miscarrying, an investor who was swayed to give $5 million by the false claim that Theranos devices would help save soldiers’ lives, and a former government official and a supermarket chief executive officer who lost confidence in an entrepreneur they had once enthusiastically backed.

“There just came a point where I didn’t know what to believe about Theranos anymore,” former Defense Secretary

testified of his time as a board member.

One by one, witnesses have said their belief in Theranos’s potential and the claims made by its founder and CEO, Ms. Holmes, eroded once it became clear the company was actually using commercial analyzers to run most of its blood tests and that errors on Theranos’s proprietary devices—purporting to need just a few drops of blood from a finger prick—were commonplace.

To win a conviction on the dozen conspiracy and wire fraud counts brought against Ms. Holmes, prosecutors must do more than show she led a startup that failed in its mission to create a new type of blood test. They must prove Ms. Holmes intentionally lied to investors to raise hundreds of millions of dollars, and deliberately misled the public to attract patients to its blood-testing centers.

Ms. Holmes’s lawyers have said the entrepreneur dedicated 15 years to Theranos’s mission and her only crime was having a startup that failed, as so many do. Once the prosecution rests, the defense can call its own witnesses or decide jurors should deliberate based on what they have already heard. So far, the defense has used cross-examination of prosecution witnesses to try to rebut the government’s charges, including showing instances when Theranos executives responded quickly when issues were raised by lab employees.

The first 17 witnesses to take the stand have described many examples of the deception prosecutors are trying to prove: that Theranos gave doctors excuses for abnormal blood-test results rather than admit the error; investors were promised nearly $1 billion in revenue in 2015, when an internal estimate was closer to $113 million; Theranos manipulated data to keep running patient blood samples on devices that were unreliable; and the startup forged a document saying pharmaceutical giant

had validated its technology when it hadn’t.

“What the government has shown is this wasn’t just conning some investors. It was so totally comprehensive,” said Richard Greenfield, a Philadelphia-based attorney specializing in shareholder litigation who has been following the trial.

Few witnesses to testify so far have spoken directly to Ms. Holmes’s intent during the years of the alleged conspiracy, though jurors on Friday heard her voice directly for the first time, in audio clips from a 2013 investor call. Ms. Holmes told investors Theranos could run “any combination of lab tests” on a finger prick of blood. She also made the oft-repeated claim that Theranos was working with the military in Afghanistan and that its blood-testing devices could be used in medevacs to reduce soldier deaths, which jurors heard persuaded investor Bryan Tolbert.

“It was about an opportunity to make money but to do so in a way that was beneficial for lots and lots and lots of people,” Mr. Tolbert, the investor who recorded the phone call, said in court. His brother served with the Marines in Afghanistan.

At a different point, Assistant U.S. Attorney John Bostic asked former Theranos product manager Daniel Edlin, “Was the Theranos analyzer ever used by the military clinically in the treatment of deployed soldiers?”

“Not to my knowledge,” replied Mr. Edlin, who helped manage the Defense Department relationship.

excused one juror this month after she expressed concern that her Buddhist beliefs would prevent her from returning a verdict. That provided a rare glimpse into how some jurors might be viewing Ms. Holmes, a new mother whose partner and mother are often in court with her.

The juror said if Ms. Holmes was sentenced to prison, “I feel like it’s my fault and I feel guilty for that.” The alternate juror selected to fill the seat minutes later told the judge she had similar hesitations.

“It’s her future,” the juror said, gesturing to Ms. Holmes in the courtroom. “She’s so young.” Ms. Holmes, now 37, was 19 when she started Theranos. Another juror was excused Friday after the judge and lawyers learned she routinely played the number game Sudoku during testimony.

Judge Davila has stressed to the jurors that their job isn’t to consider punishment, only whether Ms. Holmes is guilty of the crimes. Separating the two can be difficult for jurors, criminal-defense lawyers say.

The defense hasn’t said whether Ms. Holmes will testify and could wait to make a final decision until the moment the prosecution rests. During a recent hearing, John Cline, an attorney for Ms. Holmes, was noncommittal: “We may not put on a case. We may call Ms. Holmes; we may not.”

Whatever opinion the jurors have now could shift if Ms. Holmes decides to take the stand. White-collar trials can often turn on the defendant’s testimony alone, said Brian Blais, a Ropes & Gray LLP partner who spent 11 years as a federal prosecutor in New York.

“If she testifies, that is the make-or-break of the trial regardless of the three months that come before it,” Mr. Blais said. Hearing her side of the story could help create sympathy with jurors, but also opens up the risk of a damaging cross-examination.

In court filings, Ms. Holmes’s lawyers have said they could argue she was a victim of abuse by Ramesh “Sunny” Balwani, the former number-two at the company and her boyfriend for more than a decade. Her lawyers have said the psychological, emotional and sexual abuse she endured left her under Mr. Balwani’s control, claims an attorney for Mr. Balwani vehemently denies.

Jurors so far haven’t heard any allegations of abuse, and lawyers following the proceeding said bringing that defense successfully would almost certainly require Ms. Holmes to take the stand.

Do you think prosecutors will be able to prove their case against Theranos? Why or why not? Join the conversation below.

Defense lawyers have so far worked to distance Ms. Holmes from decision-making at her company by eliciting testimony from some witnesses who said they barely interacted with her.

Through lengthy and occasionally aggressive cross-examinations, Ms. Holmes’s lawyers have tried to point to Mr. Balwani as the source of directives made to employees and information given to investors. Mr. Balwani’s name has been evoked dozens of times by both sides; he’s pleaded not guilty to the same charges as Ms. Holmes and faces a separate trial.

During questioning of the first witness, a former Theranos financial controller, an attorney for Ms. Holmes showed an email that “Sunny’s estimate” was used to give overly rosy financial projections used to value the company. The controller testified that Theranos lost more than $585 million over roughly a dozen years.

“There is too much hype around Theranos and you. FYI, I am worried about overexposure without solid substance which is lacking right now,” Mr. Balwani wrote in one message. In another text, he told her they needed clearance from the Food and Drug Administration for blood tests.

The defense has tried at times to discredit witnesses, in particular during its four-day cross-examination of former lab director Adam Rosendorff. Attorney

began by nearly shouting at the witness, attempting to show the lab director had been coached in his responses and had shifted his answers from earlier sworn statements.

Mr. Wade also tried to pin blame for any problems in the lab on Dr. Rosendorff. That line of reasoning didn’t hold up when the next person to hold the title of lab director took the stand. Sunil Dhawan testified that he was Mr. Balwani’s dermatologist and did virtually no substantive work for Theranos and rarely showed up to the company’s offices while being listed in documents as lab director.

Prosecutors are expected to call witnesses for weeks to come, pulling from a list of more than 180 possible names disclosed to the court. Now that jurors know the broad strokes of Theranos’s rise and fall, they are likely to hear more from the two camps that prosecutors say are the victims in the case: patients and investors.

By taking her case to trial, Ms. Holmes is in the minority. According to an analysis by Pew Research Center of fiscal-year 2018 data, around 90% of defendants charged in federal court with felonies or serious crimes pleaded guilty, with 8% having cases dismissed and 2% going to trial.

Of those who went to trial, most were found guilty.

Theranos and the Elizabeth Holmes Trial

Write to Sara Randazzo at sara.randazzo@wsj.com and Heather Somerville at Heather.Somerville@wsj.com