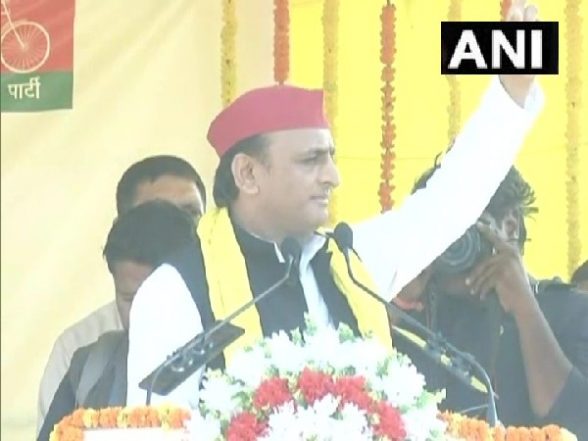 Samajwadi Party and the Suheldev Bhartiya Samaj Party on Wednesday announced their alliance for the 2022 Uttar Pradesh assembly polls and gave the slogan ‘Khadeda Howe’, a call to “drive out” the BJP from the state.

Addressing a rally on Wednesday on the 19th foundation day of SBSP in Mau, Yadav said: “I had said in Lucknow, the door through which BJP came to power has been shut by Om Prakash Rajbhar (SBSP chief) and we (SP) have put a lock on it. After “Khela Hobe” in Bengal, it will be “Khadeda Hobe” (drive out) in UP.”

The slogan ‘Khela Hobe’ (the game is afoot) was coined by the Mamata Banerjee-led Trinamool Congress for the West Bengal assembly polls this year in which the party defeated the BJP and retained power for a third consecutive term.

When the red and yellow colours of the SP and the SBSP unite, people sitting in Delhi and Lucknow becom ‘laal-pila’ (angry), Akhilesh Yadav said. BJP governments are in power both at the Centre and the Uttar Pradesh.

The SP leader also congratulated Rajbhar for the rally. “We are the people who follow the principles of Babasaheb (BR Ambedkar) and Lohia (Ram Manohar Lohia). When we move forward unitedly, there would be no match to this strength. When this rally had not been announced, people were speculating on which party will win how many seats. Now, they are saying there is no match to this alliance. When the SBSP and SP have united, maybe the public will help us win 400 seats in UP,” said Yadav.

Yadav said the BJP government did not provide any help to labourers during the COVID-19 pandemic.

“Over the past five years we focussed on only developing the state and we neither played with anyone nor pushed away people. Even now we are only thinking about the development of the state,” the minister added.

The BJP leader further said that the two parties- SP and SBSP- are trying to replicate in Uttar Pradesh the massacre, violence and anarchy that is taking place in West Bengal.

In the 2017 Assembly elections, the BJP won a landslide 312 Assembly seats and secured a 39.67 per cent vote share in the elections for 403-member Assembly. Samajwadi Party (SP) bagged 47 seats, BSP won 19 while Congress bagged seven seats.

Uttar Pradesh is set to polls in March next year. (ANI)