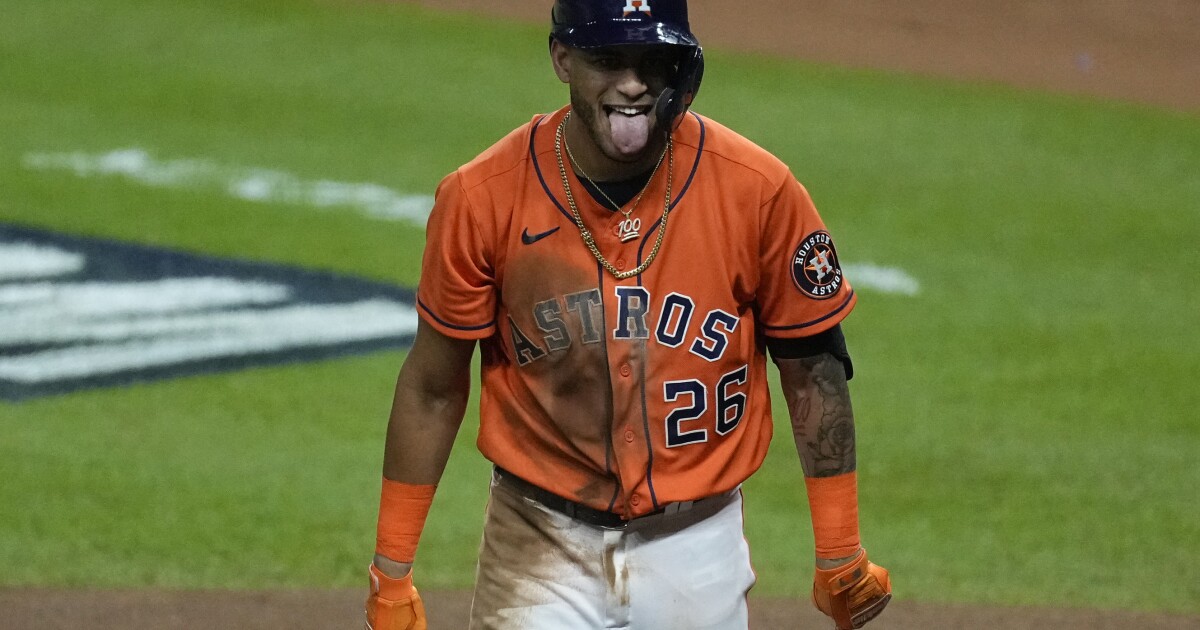 José Siri launched himself headfirst into home plate, popped up with arms flexed and screamed with all his might.

Welcome to the World Series, rook.

The career minor leaguer sparked a team whose biggest stars took a while to shine, sending the Houston Astros to a 7-2 victory over the Atlanta Braves on Wednesday night that evened the Fall Classic at one game apiece.

Jose Altuve doubled early, homered late and scored twice to break out at the plate. Siri’s speed and aggressive play created havoc on the bases, leading to a four-run second inning that helped the Astros snap a five-game skid at home in the World Series.

Altuve hit a leadoff double and scored in the first inning before adding a solo homer in the seventh as the October-tested Astros rolled past the suddenly sloppy Braves. It was the 22nd career postseason homer for Altuve, tying Bernie Williams for second-most behind Manny Ramirez (29).

Siri and Altuve ignited an offense still waiting on a big swing from Carlos Correa, Alex Bregman and ALCS MVP Yordan Alvarez in this Series.

“I was very focused,“ said Urquidy, a rookie when he beat Washington in the 2019 Fall Classic. “I love it. I love the feeling.”

The best-of-seven series shifts to Atlanta for the first of three games Friday night, with Ian Anderson scheduled to pitch for the Braves against rookie Luis Garcia.

The game was tied at 1 when Kyle Tucker got things going in the second with a one-out single before advancing to third on a single by Yuli Gurriel. The speedy Siri, who made his major league debut Sept. 3, then beat out an infield single to score Tucker and put the Astros on top.

That made Siri the first player to debut in September or later and drive in a run in that year’s World Series.

Hey Siri: How does that feel?

The usually fundamentally sound Braves then misplayed things all around. Rosario threw to an unoccupied third base and the ball rolled into foul territory, allowing Siri to dash home on the error.

“There’s so many baseball plays that don’t go like you want,“ Atlanta manager Brian Snitker said. “We just kind of got caught in between a little bit.“

Siri stood at the plate reveling in the spotlight.

“Vamos,“ Spanish for ‘let’s go,’ he hollered again and again.

Stuck in the minors since 2013, the excitable 26-year-old outfielder is now a World Siri. Before Wednesday he was most known for almost knocking over the 72-year-old Baker en route to celebrating a teammate’s postseason exploits.

This moment was all his.

“I’ve never had fear,“ Siri said through a translator. “I’m not scared.“

The crowd, so quiet a night before, roared as Siri bounded toward the dugout. A fan in the lower deck displayed a sign that read: “Don’t Poke The Bear” as the Astros rediscovered their potent offense after Tuesday night’s dud of a 6-2 loss.

The Braves had a visit at the mound to try and regroup after that fiasco of a play but Fried threw a wild pitch soon afterward to send Maldonado to third. There were two outs when Michael Brantley singled, pumping his fist as he left the batter’s box to send another run home that made it 5-1.

Urquidy permitted six hits and two runs while striking out seven and walking none to rebound from a clunker in Game 3 of the AL Championship Series when he allowed five runs while getting just five outs against Boston.

Altuve’s leadoff double got the Astros going a night after the star second baseman went 0 for 5 in the first three-strikeout game of his postseason career. He advanced to third on a fly ball by Brantley before scoring on Bregman’s sacrifice fly to make it 1-0.

Urquidy got off to a much better start than teammate Framber Valdez did in Game 1. It was a low bar, though, after Valdez was rocked for a leadoff homer by Jorge Soler on Tuesday night.

Urquidy struck out his first two batters before allowing consecutive singles to Ozzie Albies and Austin Riley. Soler then came to the plate, and the right-hander avoided the first-inning trouble Valdez got into when he fanned the big designated hitter to escape the jam.

Travis d’Arnaud homered for Atlanta in the second to tie it 1-all. Dansby Swanson singled, but Gurriel grabbed Rosario’s liner to first base for the third out.

An RBI single by Freddie Freeman cut the lead to 5-2 in the fifth.

“Obviously, you want to win two. But if you get out of here with a split, then that’s a good thing going home,” Snitker said.