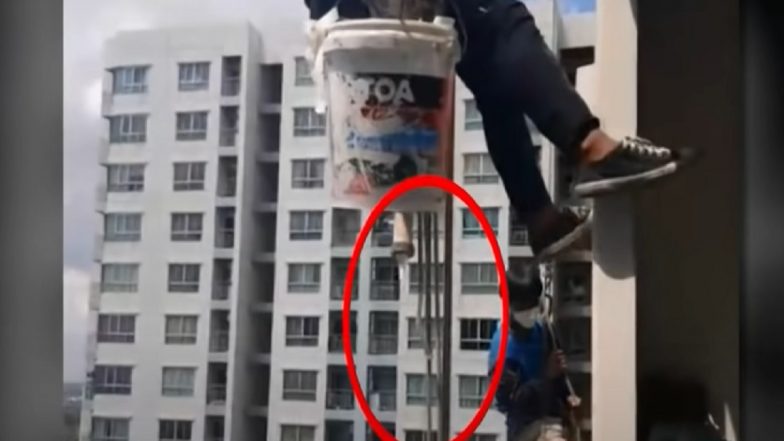 Bangkok, October 28: Police in Pak Kret city of Thailand on Wednesday briefly arrested a 34-year-old woman who allegedly cut a rope supporting two painters working on a high-rise condominium. The incident had taken place on October 12. A video shows the painters hanging above the 26th floor and urging residents to open the window and let them in. A couple had rescued the workers. Thailand to Reopen Popular Tourist Hotspots for Fully Vaccinated Visitors From November 2021.

According to local media reports, the accused woman cut the support rope for the painters because she was angry that she wasn’t informed they would be doing work. One of the workers, a Myanmar national identified as Song, later described the turn of events. He said he and two other men were lowering themselves down from the 32nd floor to repair a crack on the building. US Imported Millions of Used Medical Gloves from Thailand: Reports.

When Song reached the 30th floor, he saw someone on the 21st floor open a window and cut his rope. They realised they were unstable and began calling for help. Praphaiwan Setsing and her husband enetually saved the workers. “This incident is shocking and should not happen at all,” Setsing was quoted by news agency AFP as saying.

The accused woman had first denied her involvement in the incident. But when the police confronted her with CCTV footage and forensic evidence, she confessed. While she was temporarily released, she faces attempted murder and property destruction charges. If convicted for murder, she could face a prison term up to 20 years.

(The above story first appeared on LatestLY on Oct 28, 2021 08:53 AM IST. For more news and updates on politics, world, sports, entertainment and lifestyle, log on to our website latestly.com).