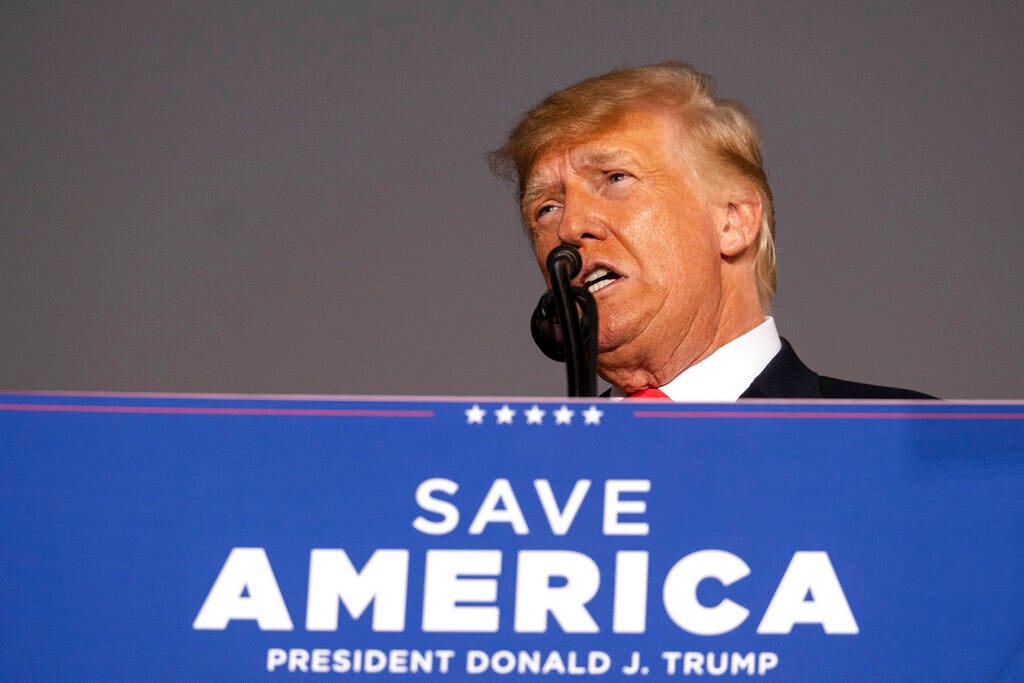 Former President Donald Trump on Wednesday appeared to tease that he may head to Virginia ahead of Election Day next Tuesday in the hotly contested and dead even gubernatorial race between former Democratic Gov. Terry McAuliffe and Republican nominee Glenn Youngkin.

“Chanting, “We love Trump” in Arlington, Va. Thank you, Arlington, see you soon!” the former president wrote Wednesday in a statement released by his Save America political organization.

The former president was referring to chants of “we love Trump” by protestors who briefly interrupted President Biden on Tuesday night as he headlined a large rally for McAuliffe in Arlington, Virginia, in the commonwealth’s heavily Democratic suburbs of Washington D.C.

Save American communications director Taylor Budowich, in tweeting out Trump’s statement, added that “Virginia loves President Donald J. Trump and his MAGA movement will be delivering a major victory to Trump-endorsed businessman @GlennYoungkin.”

Budowich then wrote that “President Trump looks forward to being back in Virginia! Details will be released when appropriate.”

As for the timing of any potential rally – strike Saturday. Sources close to the former president indicate that Trump will be in Atlanta, Georgia that evening to attend game four of Major League Baseball’s World Series, between the Atlanta Braves and the Houston Astros.

Trump’s endorsement of Youngkin in the spring helped the first-time candidate and former private equity CEO who hails from the business wing of the party to win the Virginia’s heavily contested GOP nomination.

Trump remains very popular with Republican voters in Virginia and across the country, and extremely influential with GOP politicians as he continues to play a kingmaker’s role in the party and repeatedly teases another presidential run in 2024.

But Trump remains unpopular among Virginia’s overall electorate, according to the latest polls, in a state he lost by 10-points to Biden in last November’s presidential election. McAuliffe doesn’t miss a chance to link Youngkin to Trump at the former governor’s rallies and events, in his campaign commercials, and in media interviews.

With the news of a potential Trump rally in Virginia, McAuliffe put out a statement once again tying Youngkin to the former president, claiming that “Glenn Youngkin’s entire campaign has been a full embrace of Donald Trump’s dangerous extremism.”

TRUMP, BIDEN, NOT ON THE BALLOT, BUT CENTER STAGE IN VIRGINIA GUBERNATORIAL SHOWDOWN

And while McAuliffe’s teamed up at rallies with Biden, Vice President Kamala Harris, former President Barack Obama and other top Democrats, Youngkin has eschewed stumping with Trump and other top GOP surrogates in a state where Republicans haven’t won a contest for governor, lieutenant governor, or attorney general in a dozen years.

As he kicked off his statewide bus tour recently, Youngkin emphasized that he wouldn’t be campaigning with top surrogates and instead would feature “everyday Virginians.”

Fox News reached out to Youngkin’s campaign regarding a potential Trump rally in Virginia, but had not received a response at the time this article was published.

Trump’s comments about a potential Virginia rally come a day after Biden – as he spoke at the McAuliffe event – tied Youngkin to the former president and appeared to bait Trump.

The president charged that Youngkin “doesn’t want to talk about Trump anymore.”

“Terry’s opponent has made all of his private pledges of loyalty to Donald Trump. But what’s really interesting to me: He won’t stand next to Donald Trump now that the campaign is on,” Biden said to laughter from the crowd.

And the president argued that Youngkin “won’t allow Donald Trump to campaign for him in this state. And he’s willing to pledge his loyalty to Trump in private, why not in public? What’s he trying to hide? Is there a problem with Trump being here? Is he embarrassed?”