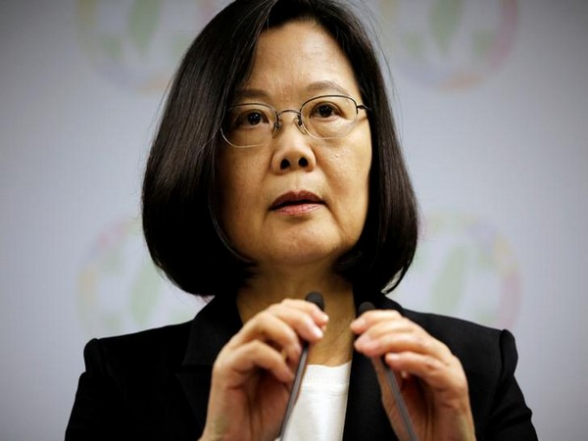 Taipei [Taiwan], October 28 (ANI): Amid the rising tensions between the United States and China, Taiwan’s President Tsai Ing-wen on Tuesday (local time) said that the threat from Beijing is growing “every day,” and confirmed the presence of American troops on Taiwanese soil for training purposes.

In an interview with CNN, Tsai said Taiwan, which is located fewer than 200 kilometers (124 miles) away from China’s southeastern coast, was a “beacon” of democracy that needed to be defended to uphold faith worldwide in democratic values.

Beijing claims full sovereignty over Taiwan despite the island’s self-governance for over seven decades. Meanwhile, Taipei continues to counter the Chinese aggression by increasing strategic ties with democracies including the US.

“Here is this island of 23 million people trying hard every day to protect ourselves and protect our democracy and making sure that our people have the kind of freedom they deserve,” she said.

“If we fail, then that means people that believe in these values would doubt whether these are values that they (should) be fighting for.”

Taiwan and mainland China have been separately governed since the Nationalists retreated to Taiwan at the end of the Chinese civil war more than 70 years ago. Taiwan is now a flourishing democracy but the mainland’s ruling Chinese Communist Party (CCP) continues to view the island as an inseparable part of its territory — despite having never controlled it, CNN reported.

Today, relations between Taipei and Beijing are at their lowest point in decades. Earlier this month, China’s military sent a record number of warplanes into the air around Taiwan while diplomats and state-run media warned of a possible invasion unless the island toes the CCP line.

According to CNN, Tsai became the first Taiwan President in decades to acknowledge the presence of US troops on the island for training purposes. The last official US garrison left in 1979, the year Washington switched formal diplomatic recognition from Taipei to Beijing, though last year media reports hinted at small deployments.

Tsai wouldn’t say exactly how many US military personnel are on the island at present but said it was “not as many as people thought.” “We have a wide range of cooperation with the US aiming at increasing our defense capability,” she said.

Earlier in a major speech on 8 October, Chinese President Xi Jinping pledged “peaceful reunification” between Taiwan and the mainland. Although he made no mention of an invasion in the speech, Xi has previously refused to rule out military action.

Meanwhile, on Taiwan’s National Day on 10 October, in response to growing Chinese military action, Tsai said Taiwan could not be forced to follow “the path China had laid out for it.”