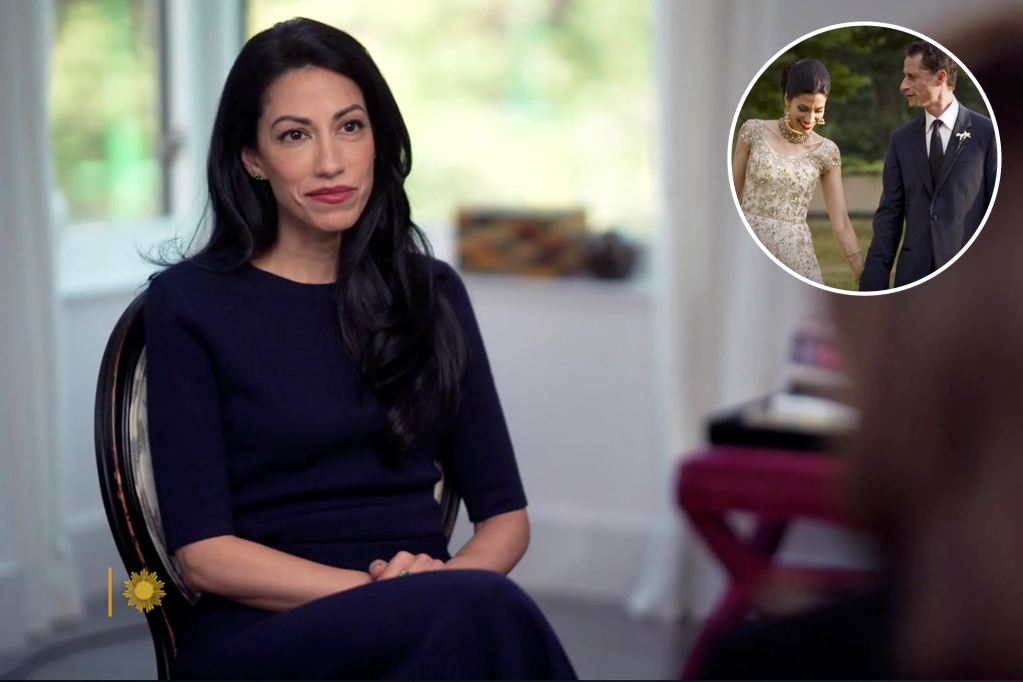 Huma Abedin suggested she contemplated suicide as her estranged husband Anthony Weiner’s sexting scandal exploded into the national spotlight, she revealed in a new interview.

The long-suffering former top aide to Hillary Clinton opened up in her first-ever TV appearance about the emotional and mental toll Weiner’s sicko behavior had on her.

“You write that, for a brief second, you contemplated walking off the subway platform?” “CBS Evening News” anchor Norah O’Donnell asks Abedin, whose memoir is set to hit shelves on Tuesday.

“Well, one of the best things I’ve had in my life is my faith, and the belief that there is always a way through,” Abedin, 45, replied.

At the end of the interview, O’Donnell asked Abedin — who shares 9-year-old son Jordan with Weiner — whether she’s still “angry” with the disgraced congressman.

“I can’t live in that space anymore,” she said. “I tried that. It almost killed me.”

Asked to characterize her relationship now with Weiner, as they continue to finalize their divorce, Abedin replied, “We are good.”

“He is my co-parent, and I learned the full truth, I processed it and moved on,” she continued. “I wish him well. He, I hope, wishes me well. I think he does.”

Abedin discloses for the first time in her new book that Weiner’s infidelity went beyond the X-rated texts he sent and received from various women, the interview reveals.

“I know it’s hard for you to say it, but you found that he was having physical relationships in your apartment?” O’Donnell asked, prompting Abedin to respond with a simple, “Yes.”

It was unclear exactly how many in-person relationships Abedin discovered or when they took place.

In her new memoir “Both/And: A Life in Many Worlds,” Abedin also says she was once sexually assaulted by a senator, and how she consoled Weiner after he claimed hackers tweeted a crotch shot on his account.

Weiner’s political career and marriage were torpedoed by revelations of his rampant sexting, which later culminated in a prison stint for sending inappropriate messages to an underage girl.

Abedin stuck with her misguided hubby when he was forced to resign from Congress.

He successfully launched a political comeback with a 2013 mayoral campaign — before his campaign was sunk by revelations that he had started sexting again under the pseudonym “Carlos Danger.”

Abedin finally dumped Weiner after The Post exclusively revealed in 2016 that he’d sent another woman a lewd picture of himself in bed as their young son lay next to him. She filed for divorce the following year after he copped to sexting with the underage girl and landed an 18-month prison sentence.

In 2016, the FBI’s investigation of Weiner infamously led to the seizure of a laptop that Abedin shared with him — a monumental development in the campaign that came just days before Clinton’s general election loss to Donald Trump.