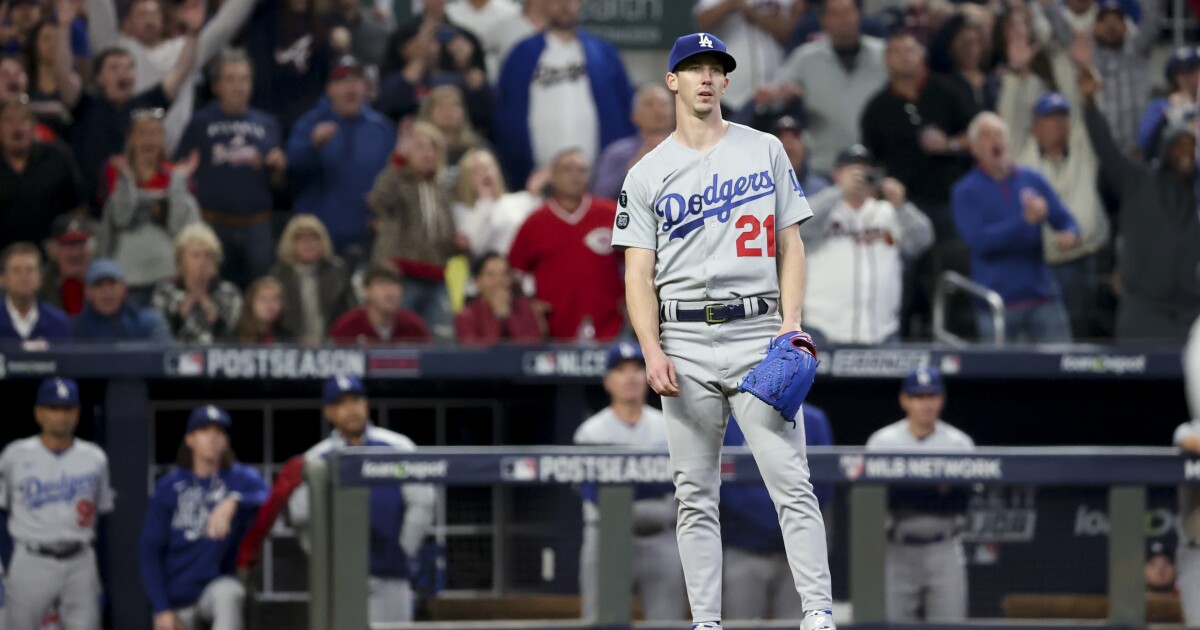 Math problem for the Dodgers’ analytics department: A player is hitting about .600 against all of your pitchers in a short series. What is the best way to pitch him? Answer: Walk him. Every time. A .600 batting average means the odds are he will get a hit each time he hits. Therefore, giving him one base precludes the possibility that hit will be a double, triple or home run. (I’m available to help manage next year.)

With the Dodgers clinging to a 2-1 lead in Game 6 of the NLCS, my wife and I sat in our family room begging Dave Roberts to intentionally walk the white-hot Eddie Rosario with first base open and two out. We averted our eyes as he scorched a laser three-run homer. And we keep asking: Why? Why? Why? I flashed back to Game 6 of the 1985 NLCS when Tom Lasorda’s disastrous decision to pitch to Jack Clark with first base open resulted in a season-ending three-run blast.

I do not fault Dave Roberts for the Dodgers’ failure to repeat as champions. There were many reasons it happened, starting with their lack of hitting, especially timely hitting. Then there was the poor fielding, including both catching and throwing. Finally, and most glaring, was their pitching decisions with the starters, and for this I blame upper management. It was a great year, just not as great as it should have been.

You have to love the comments made by Mookie Betts after the loss in Game 6. The highest-paid Dodger with the longest contract stated: “I am not disappointed at all. It is what it is. You win some, you lose some. We didn’t score more runs than they did. They played well.” Dear Mookie. The adage that says, “It’s better to be thought of as a fool than to speak and remove all doubt,” can be applied here. You weren’t disappointed? Really? Maybe you should pay back the fans who wasted their money in the hopes that you guys actually cared.

If the Dodgers’ postseason marks were added to their regular-season records, Walker Buehler, Max Scherzer and Julio Urías would not get the Cy Young Award and Trea Turner would not win the National League batting title.

My late Dodger-fanatic mother would probably wonder: What would Sandy Koufax say if he were asked to pitch in the last game of the National League Championship Series? Certainly not: “My arm is dead.” Mom, there are no more Sandy Koufaxes.

Last week, a nurse asked Max Scherzer in which arm he’d like his booster. He replied, “Give it to me in the right — I’m not using it anyway.”

Jorge Castillo writes that the Dodgers were “too drained by injuries and a depleted staff” to win the pennant. Castillo needs to watch a Stanley Cup playoff run to appreciate “drained.” Baseball is probably the least taxing of the so-called four (maybe it’s time to add soccer as a fifth) major sports, with the exception of pitchers. Hockey players are smashed into boards or hit in open ice relentlessly. It’s understood and accepted that they are functioning less than 100% for 16 to 28 games to win the Cup.

I predict it will be many years before we again see a preseason prediction from Bill Plaschke declaring an impending “greatest season in baseball history” turned in by the Dodgers.

The best baseball trade of the year goes to the city of Atlanta — the All-Star game for the World Series. I think Atlanta fans are happy with that regardless of their political leaning.

Thank you to the letter writers who criticized Russell Westbrook one game into his Lakers career. If there’s anyone more fun to watch than Russell Westbrook, it’s Angry Russ. Keep it coming. I look forward to the next eight months of watching him play harder than everyone else every night.

The other night’s embarrassing loss by the Lakers to the lowly Thunder should fall squarely on Frank Vogel’s shoulders. Here are a couple of notions for you, Frank: A three-point shooter has less of a chance of scoring if he is guarded. Also, it’s OK to yell at your team if they are playing stupidly, carelessly and/or quitting.

I have been a Lakers fan since 1967. That loss to Oklahoma City was the worst Lakers defeat I have ever witnessed. To blow a 26-point lead against the worst team in the league is indefensible in more ways than one. Where were the coaching adjustments ? Why didn’t someone call a timeout and demand that the players play like they want to win? Where was the team leadership to step up and say “give me the ball”? I know it was only one game, but the players’ postgame comments that “things happen” is not good.

The definition of insanity has been described as doing the same thing over and expecting a different result. I felt that way when you laid the failure of the USC football team last weekend on the coaches. Why not face a fact? This year’s team ain’t that great, and isn’t going to become that great, regardless of who is leading it. Perhaps a new coach, given a few years of recruiting success, can bring the Trojans back to prominence. But please don’t invoke the days of Pete Carroll. To my way of thinking, the penalties imposed on USC as a result of the rules infractions during Carroll’s tenure are a leading cause of the program’s fall from grace.

In four years, Chip Kelly’s Bruins have progressed from being hopeless losers to becoming legitimate also-rans.

The Los Angeles Times welcomes expressions of all views. Letters should be brief and become the property of The Times. They may be edited and republished in any format. Each must include a valid mailing address and telephone number. Pseudonyms will not be used.