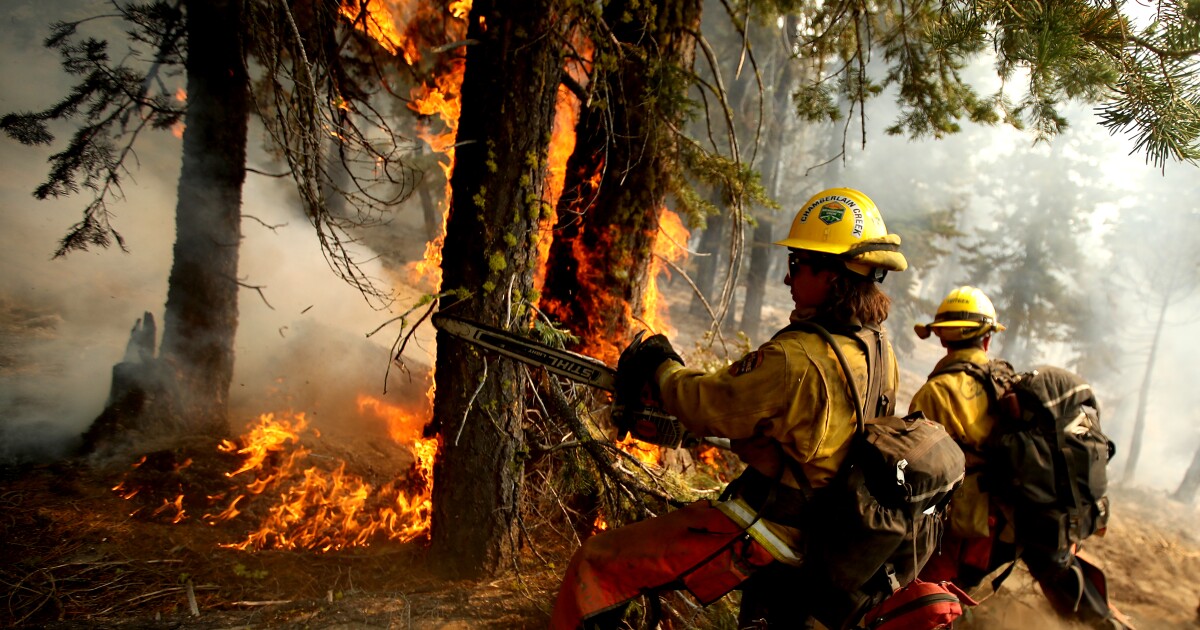 Amid federal probe in Dixie fire, PG&E faces $1B in losses

In yet another investigation into the role that utility giant Pacific Gas & Electric has played in California’s worsening wildfires, the company announced Monday that it received a subpoena from the U.S. attorney’s office seeking documents related to the Dixie fire.

PG&E received the subpoena Oct. 7, according to Monday’s regulatory filing, which also said the utility expects to take a loss of at least $1.15 billion from the blaze.

The Dixie fire — the second-largest wildfire in California history — ignited in the dense forest of Plumas County in July. In the weeks and months that followed, it burned through more than 963,000 acres across five counties, destroying 1,300 structures and leveling the town of Greenville.

The cause remains under investigation, but PG&E previously said its equipment may have been the source of the blaze after a worker in the Feather River Canyon area reported two blown fuses and a tree leaning into a power line conductor on July 13, the date the fire started.

A small fire was burning at the base of the tree, but nearly 10 hours passed between the initial sighting and the arrival of first responders, according to a report submitted to the California Public Utilities Commission.

The quarterly report filed Monday confirmed that PG&E received a subpoena from the U.S. attorney’s office for the Eastern District of California in October. The company is cooperating with the investigation, they said.

PG&E spokeswoman Lynsey Paulo said in a statement Monday that the company is “working every day” to resolve claims stemming from past fires and to make its systems safer.

“Our hearts continue to be with everyone who was affected by the Dixie fire,” Paulo said. “As we’ve shared previously, we believe our actions around the time of the Dixie fire’s ignition show that we are a reasonable operator of our electric system. We remain focused on reducing wildfire risk across our service area and are committed to keeping our customers and communities safe.”

A spokesperson for the attorney’s office declined to comment Monday, citing the ongoing investigation.

The California Department of Forestry and Fire Protection, the Butte County district attorney’s office and other agencies are also investigating the cause of the blaze, PG&E said. Cal Fire seized some equipment as part of its probe in July but has not yet issued a determination as to the fire’s cause.

Potential liabilities from the fire are dependent on a variety of factors, including the cause of the blaze as well as the number, size and type of structures and trees damaged or destroyed, PG&E said.

But the aggregate $1.15-billion liability represents the lower end of the range of potential losses: The company also could be liable for claims relating to property damage, business interruptions, fire suppression and evacuation costs, medical expenses and even damage to national park or forest lands, the utility said.

PG&E did not have enough information by the quarterly filing date to accurately estimate some of those costs — including potential claims tied to vegetation destruction — but said such losses “could be significant with respect to fire suppression costs due to the size and duration of the 2021 Dixie fire.”

The latest investigation marks another blow for the beleaguered utility, which filed for bankruptcy in 2019 after multibillion-dollar legal liabilities from 2018’s Camp fire and other blazes.

PG&E eventually pleaded guilty to 84 deaths from the Camp fire, the deadliest wildfire in state history.

Though it emerged from bankruptcy the following year, PG&E has continued to face legal challenges.

In September, the Shasta County district attorney’s office filed 31 criminal charges, including manslaughter, against PG&E for its role in the 2020 Zogg fire, which killed four people and destroyed more than 200 buildings.

The company’s chief executive, Patti Poppe, acknowledged at the time that its equipment probably started the Zogg fire but disputed the criminal charges.

Poppe also noted that climate change and unprecedented drought in California have “forever changed the relationship between trees and power lines,” and said the agency had established new standards to reduce risk to communities.

Briona Haney, a spokeswoman for the Shasta County D.A.’s office, said a Zogg fire arraignment scheduled at the end of October had been deferred because the company is filing a demurrer against air pollution charges in the complaint.

PG&E also faced 33 criminal charges for its role in the 2019 Kincade fire in Sonoma County after Cal Fire determined its transmission lines caused the blaze. The company pleaded not guilty in October to those charges, the Sonoma County district attorney’s office said.

PG&E said it is aware of approximately 10 complaints on behalf of 676 plaintiffs related to the Dixie fire, and said additional complaints are likely.

The plaintiffs assert that PG&E’s “alleged failure to properly maintain, inspect and de-energize their distribution lines was the cause of the 2021 Dixie fire,” the company said.

The power line suspected in the Dixie fire was set to be buried underground in a safety move, but the work was not completed before a Douglas fir fell on the line and blew two fuses.

PG&E expects to recover costs of the fire from insurance, customers and the California Wildfire Fund, it said in the filing.

More than $630 million in costs was incurred in suppressing the Dixie fire, according to a report from the National Interagency Coordination Center.

After burning and smoldering for nearly three months, the blaze was declared fully contained last Tuesday.