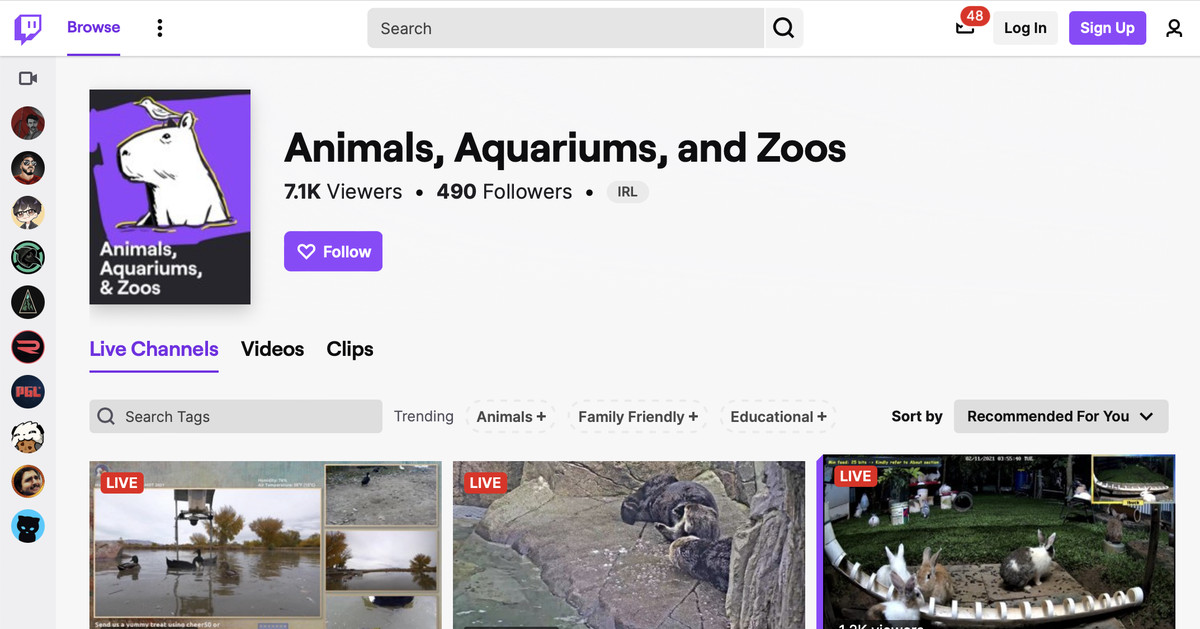 RECENT UPDATE: Twitch’s new Animals livestream category may give you that fuzzy feeling

Twitch is giving streamers who focus on furry friends a place to group their streams with its new Animals, Aquariums, and Zoos category, which may just end up being the greatest page on the internet. The company says that the category, launched as part of its Animal Week, is meant to bring together a bunch of streams from zoos, conservation projects, and animal owners that had been spread out over the site, making it easier for people to find them.

If you’re looking for something relaxing, the category makes it pretty easy to find. As I write this, the category’s page features a New York wolf conservancy’s den livestream, video from an otter enclosure, and a stream from the Monterey Bay Aquarium that features a beautiful oceanside view (though at the moment it’s more ASMR than animal). There’s also a stream that promises to feature squirrels eating during the day and raccoons eating at night. What I’m saying is that if my browser locked onto this page and wouldn’t let me do anything else on the internet, I don’t think I’d mind one bit.

Please internet: do not overfeed the ducks or overstimulate the turtles.

In its announcement post, Twitch says that some creators even have interactive animal streams — a farm that livestreams its ducks will let you feed them if you donate bits (a Twitch virtual token), and a turtle streamer will let you change the lights, according to the company. Hopefully there’s some limit on how often the lights and music can be changed, or how much duck food will be given out over a certain period.

Hopefully, having a dedicated category will help bring more attention to organizations working on conservation and to creators who are encouraging their audiences to donate to those causes (while rewarding them with endless Animal Content™). There’s been a lot of bad news around Twitch recently, between a hack that leaked its source code and the hateful raids against marginalized streamers, but hopefully the platform will be able to keep this one corner of the internet a pleasant place — we could really use some more of those.