Australians spend $179 on Cup Day on average, but how does it compare to stocks and Bitcoin?

Australians on average spend almost $180 each on Melbourne Cup Day as punters and workplaces around the nation gear up for one of the biggest social items on the calendar.

New analysis by Finder found the average amount spent on Melbourne Cup was $179, $88 of which is spent on betting while the remaining $91 is spent on entertainment, fashion or dining.

Of course, this is an average figure — meaning those on the turf at Flemington may be lifting the mean for those who watch the race at home in their pyjamas.

While some recoup their race-day expenditure with a hot pick, many find the only return from a good Cup day is a headache and sore feet.

Finder’s personal finance specialist, Taylor Blackburn, said the key to any wager is to know your risk.

“While the lucky few might back a winner, much of that Melbourne Cup cash wagered will line the pockets of bookies and gambling agencies,” Mr Blackburn said.

“An investment in Bitcoin can generate some future wealth for yourself, but much like the horses, it can be a wild ride.

“Just like the Cup, even if you are picking well-known shares or coins, there is always some risk that your horse won’t come in. Whether you’re speculating on shares, buying into Bitcoin or punting on the ponies, remember there are no such things as ‘sure bets’, so do so responsibly.” 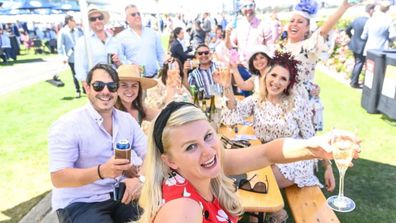 All of the fashion and fun from the 2021 Melbourne Cup