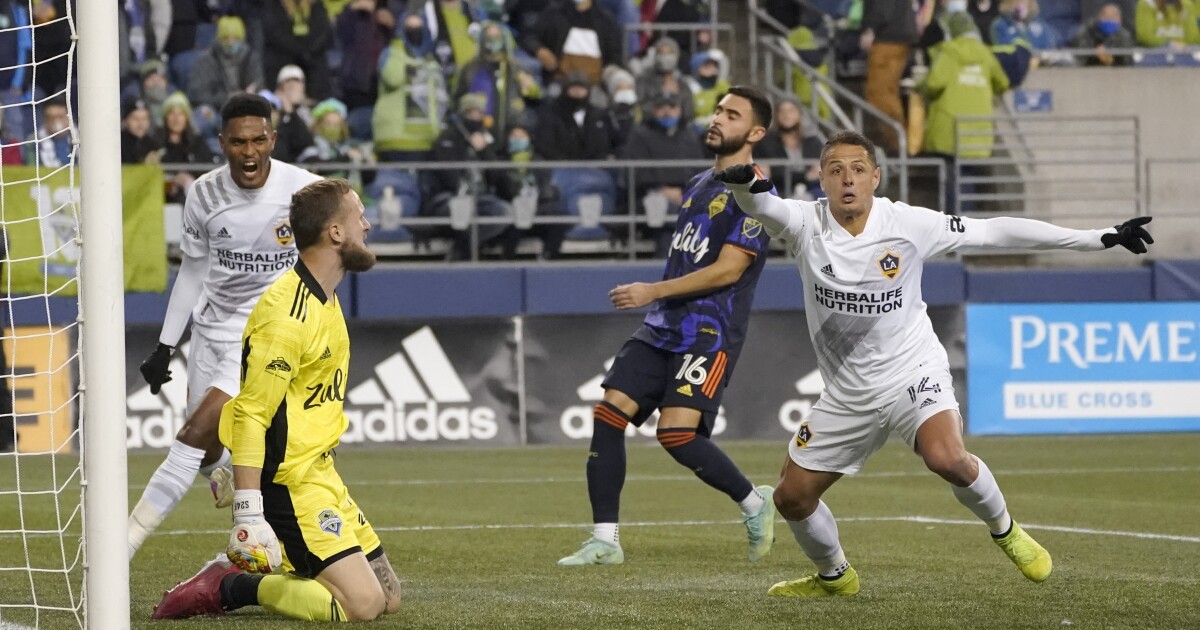 The Galaxy’s grip on an MLS playoff berth grew tenuous Monday after a 1-1 tie with the Seattle Sounders, a result that opened a clear path to the postseason for LAFC.

The point lifted the Galaxy (13-12-8) into sixth in the MLS Western Conference standings with only Sunday’s season finale with Minnesota United remaining. But the Galaxy will need help to remain in the top seven and advance to the postseason because a win over Minnesota alone won’t ensure that since Vancouver, Real Salt Lake and LAFC, if they win out, could push them below the playoff line.

The Galaxy broke on top in the 19th minute when an unmarked Javier “Chicharito” Hernández, wearing a white, long-sleeved undershirt and black gloves against the wet and chilly Seattle weather, deflected the ball in from the center of the six-yard box.

The sequence started with a Sebastian Lletget corner kick that Nick DePuy headed toward Hernández, who, while facing away from the goal, redirected it in with the back heel of his right foot for his team-leading 15th goal of the season.

Lletget nearly doubled the lead in first-half stoppage time, one-hopping a right-footed shot from the center of the box toward the far post. But Seattle keeper Stefan Frei, diving to his right, got just enough of his right hand on the ball to push it wide.

Frei made another big save in the opening minutes of the second half, stopping Rayan Raveloson from point-blank range. That proved huge seconds later when Galaxy defender Oniel Fisher tripped Seattle’s Cristian Roldan on the right edge of the box, setting up a penalty that Raúl Ruidíaz, playing for the first time in more than a month, converted to tie the game.

The Sounders also got 30 minutes from former national team forward Jordan Morris, who was making his season debut after tearing the anterior cruciate ligament in his left knee in February while on loan with Swansea City of the second-tier English Championship.

And while Morris was active, it was teammate Xavier Arreaga who nearly won the game for Seattle only to see Galaxy keeper Jonathan Bond two-hand his header off the crossbar to preserve the draw and give the Galaxy their first point at Lumen Field since 2017.

“There were chances for us to win it,” Galaxy coach Greg Vanney said.

And that sets up a must-win game with Minnesota at home, where the Galaxy haven’t won their season finale since 2012.

“The path is clear as to what we have to do,” Vanney said. “It’s a knockout game.”