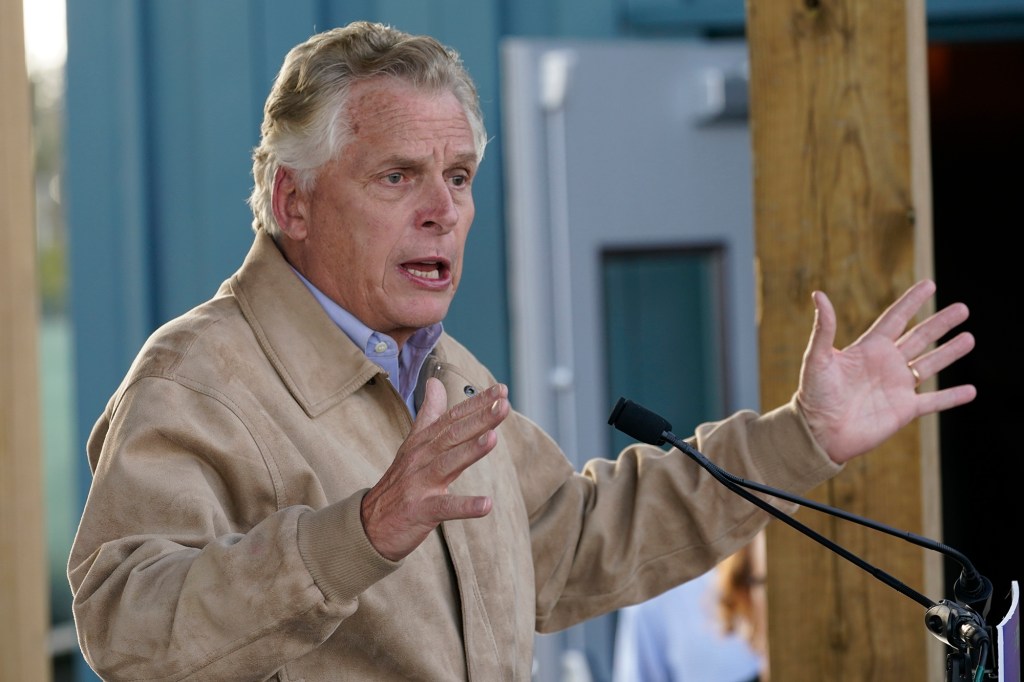 McAuliffe laments number of white teachers ahead of gov. vote

Democratic Virginia gubernatorial candidate Terry McAuliffe called for the commonwealth to “diversify” its teacher base, complaining that too many educators there are white.

McAuliffe, during a Sunday rally in Richmond, promised to create a program apparently aimed at attracting non-white teachers should he win Tuesday’s closely contested election.

“We’ve got to diversify our teacher base here in Virginia,” he told supporters. “Fifty percent of students at Virginia schools — K-12 — 50 percent are students of color, and yet 80 percent of the teachers are white.

“We all know what we have to do in a school to make everybody feel comfortable in school,” McAuliffe continued. “So, here’s what I’m going to do. We’ll be the first state in America — if you’ll teach for five years here in Virginia in a high-demand area, whether that be geographic or course work, we will pay room, board, tuition, at any college, any university, any HBCU [historically black colleges and universities] here in the commonwealth of Virginia.”

Republicans and conservatives were aghast after a video of McAuliffe’s statement went around social media Monday.

“Democrats are trying to hard to find a message on education that isn’t ‘parents are bad’, so they’ve come up with ‘too many teachers are white,’ ” cracked GOP operative Logan Dobson on Twitter.

“‘I’m gonna fire teachers because they’re white’ sounds like a bad way to get their votes, but I am no Democrat superstrategist,” agreed Virginia-based Republican strategist Nathan Wurtzel.

“Too many white teachers, McAuliffe says, wrapping up a campaign in which he accuses his opponent of racial division,” mocked TownHall.com political editor Guy Benson.

“If making kids ‘feel comfortable’ required having only teachers of the same race, then that would require segregated schools (or be untenable in a multiracial society),” tweeted Daily Wire reporter Luke Rosiak. “What most people want to cultivate is being comfortable around all people, without obsessing about race.”

McAuliffe, who served as governor of Virginia between 2014 and 2018, has repeatedly stumbled on the issue of education in the final weeks of his campaign against Republican Glenn Youngkin.

During a Sept. 28 debate, McAuliffe flatly stated, “I don’t think parents should be telling schools what they should teach” when asked to respond to complaints about sexually explicit books.

McAuliffe has also insisted that critical race theory is not taught at K-12 schools in Virginia, despite evidence to the contrary.

“Let me be clear: Critical race theory is not taught in Virginia. Nor has it ever been taught,” McAuliffe told WJLA-TV Oct. 19. “I’ll be honest with you. I find it so offensive. It is a racist dog whistle and all he’s [Youngkin is] trying to do is divide parents and use children as political pawns.”

By contrast, Youngkin has advocated for greater parental involvement in Virginia schools and has called for a state investigation of the public school system in wealthy Loudoun County over claims officials there covered up the sexual assault of a female student at a high school earlier this year.

Though analysts say the final outcome of Tuesday’s race will be a toss-up, a number of polls taken in recent days have shown a shift in Youngkin’s favor. The average of surveys tracked by the website FiveThirtyEight showed the Republican leading by 1 percentage point Monday evening, while the RealClearPolitics polling average showed Youngkin up by 1.7 percentage points.

Some of that momentum can be attributed to Youngkin’s message on education hitting home with Virginia voters. A Washington Post poll published last week indicated that voters who picked education as their top issue in the race supported McAuliffe by 33 percentage points in September, but now back Youngkin by 9 percentage points.

Virginia last elected a Republican governor in 2009, and the closeness of the race in a state President Biden carried by 10 percentage points last year is widely seen as a sign of the headwinds Democrats face in next year’s midterm elections.

Previous The Philippine town that must feed the sharks to survive
Next Is brushing your teeth for two minutes really enough?