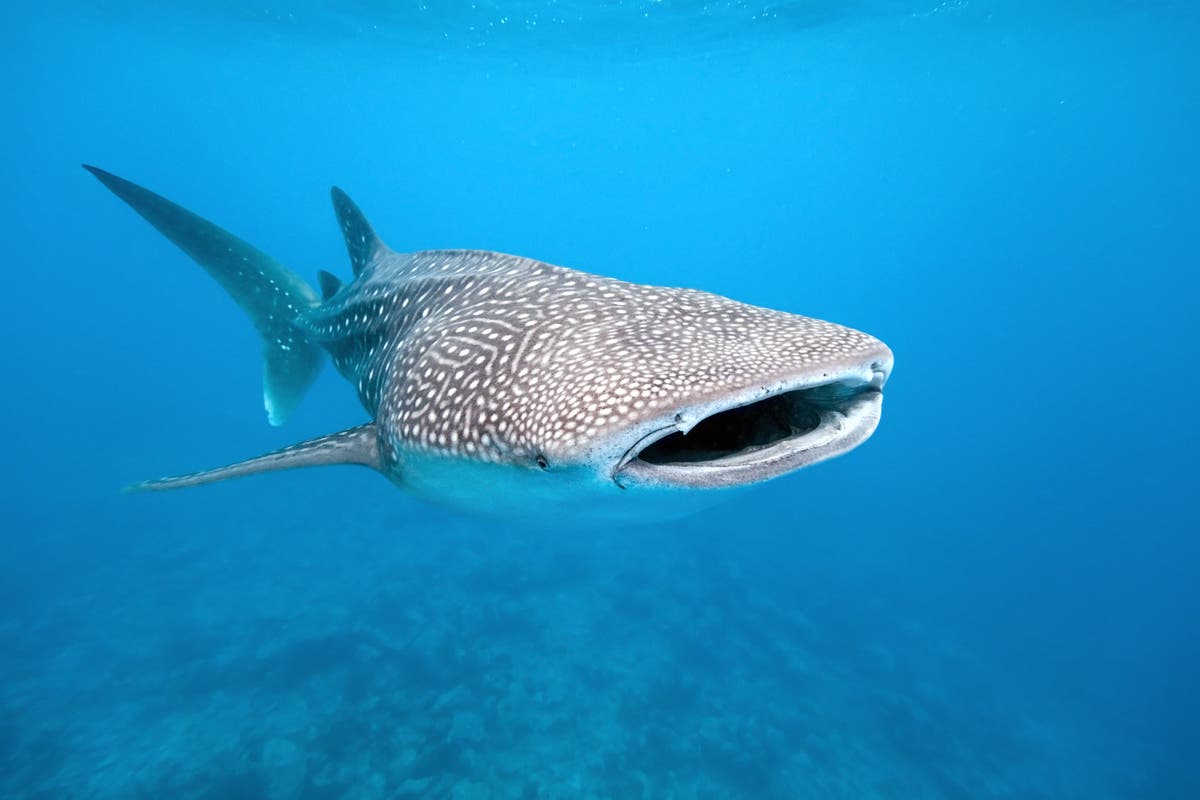 The Philippine town that must feed the sharks to survive

In the predawn light, Lorene de Guzman paddles out to sea in his tiny wooden outrigger to hand-feed the giants living in the water.

One of the behemoths, a whale shark known as 180, swims up, its enormous mouth gliding across the surface of the still ocean.

“Where have you been?” De Guzman asks 180, whom he has not seen in weeks, as he drops handfuls of shrimp into the water and gently scrapes some debris off the shark’s body. “You must have travelled to a far-off place.”

When 180 is done with breakfast, De Guzman gazes out and waits in the calm water, hoping the tourists might return today, or some day.

The waters around Tan-Awan, his town of some 2,000 people in Cebu province, attracted more than half a million tourists in 2019, all eager to interact with the huge and charismatic marine animals, which can reach more than 60 feet in length.

While their size is imposing, whale sharks are gentle giants. Their mouths are gargantuan, but they are filter feeders. Their hundreds of vestigial teeth are tiny, and they cannot bite.

In pre-pandemic days, whale-shark tourism was booming in Tan-Awan, which had been a sleepy fishing community until the area’s outsized animals became a global draw starting about a decade ago.

But even before the pandemic all but halted international visits to Tan-Awan, and to Oslob, the broader municipality surrounding it, difficult questions were being asked about the controversial relationship between a species in decline and a community grappling for survival.

Whale sharks are migratory, but tourism-dependent residents of Tan-Awan, such as De Guzman, have encouraged some of them to stay all year round with the highly contentious practice of feeding the wild animals on a daily schedule.

“The accessibility makes them quite a good target species,” says Ariana Agustines, a marine biologist who has researched the whale-shark populations in the Philippines. “In terms of hunting, unfortunately, in the past; and tourism now in the present.”

But in Tan-Awan, they are being provisioned with sergestid shrimp, known locally as uyap. “It’s just one type of food,” Agustines says. “This is a large deviation from their natural diet.”

The regular feedings have also altered their diving behaviour, with these whale sharks spending more time close to the surface, resulting in significantly more scarring and abrasions to their bodies from boats and other floating hazards than are suffered by those in non-provisioning locations.

But the appeal to tourists of a practically guaranteed sighting means Tan-Awan residents have no intention of abandoning the feeding practice, despite the growing pressure to stop. The tourism money means too much, with whale-shark encounters bringing some $3.5m (£2.6m) into the area in 2019.

“The whale sharks lifted us up,” De Guzman says. “They gave jobs to the people.”

“They’ve taken to us. They will leave if we don’t feed them. It’ll hurt their feelings. They’ll sulk,” De Guzman says. “We feed them even if we run out of budget. We borrow money to feed them.”

This attachment is made easier both by the sharks’ agreeable nature and by how readily identifiable individuals are.

Each whale shark has a unique constellation of spots, which bear a resemblance to stars in the night sky – the inspiration for the creature’s name in Madagascar, “marokintana”, or “many stars”. In Javanese, it is “geger lintang” or “stars on the back”.

In the past, local fishermen avoided the sharks. But a little over 10 years ago, one fisherman, Jerson Soriano, started playing with them in the water. A resort owner in the area was struck by the spirited interaction and asked Soriano to transport some of his guests out onto the water so they too could swim with the giants.

Soriano started baiting the whale sharks with uyap. More fishermen followed suit. They formed an association of sea wardens responsible for both feeding the sharks and ferrying the tourists to see them. Visitors posted their whale-shark selfies on social media. Suddenly, the local waters were crowded with visitors.

The quiet town lit up with resorts and restaurants. Younger residents stayed to work in Tan-Awan, instead of migrating to the city or abroad. De Guzman’s income doubled, then tripled, and he rebuilt his home. The area’s only high school opened.

But the provisioning practice has come under strong criticism, with the World Wildlife Fund only one of many conservation organisations finding fault with the idea of whale-shark feeding and urging tourists in the Philippines to go instead to Donsol, a non-provisioned site, to see them.

Almost 1,900 whale sharks have been identified in Philippine waters, the second-largest known population in the world. Scientists give individual whales numbers for names.

Globally, the whale-shark population has been more than halved over the past 75 years, and their decline in the Indo-Pacific region has been even more rapid, at 63 per cent – statistics that prompted their listing in 2016 as an endangered species.

Mark Rendon, the president of the sea wardens, is aware of the criticism but is unmoved. “We know the whale sharks better than they do,” he says of the efforts by conservationists to end the practice.

Of much greater and more immediate concern to Rendon are the effects of the Covid-19 pandemic. With no tourists arriving, hospitality workers, motorbike drivers and whale-shark boatmen have been scraping around for alternative sources of income. Across town, doors and windows were boarded up.

As the pandemic stretched on, many of the whale-shark wardens started returning to their former – and much less lucrative – trades: fishing and farming.

Conservationists point to the pain Tan-Awan is now feeling as a good reason to shun the feeding model adopted here.

“In most locations globally where they’re not being provisioned, it’s seasonal,” Agustines says of the appearance of whale sharks. “So with that seasonality, there is an opportunity for having a different set of income so that the community isn’t completely reliant on just one type, in the event that something happens.”

Pandemic or not, the whale sharks have continued showing up, right on time, to be fed.

Rendon says the wardens have turned to different government bodies to raise money for the more than 60lb of shrimp needed each day. “If that goes,” Rendon says of the small amounts of government aid, “all of this will disappear.”

This article originally appeared in The New York Times