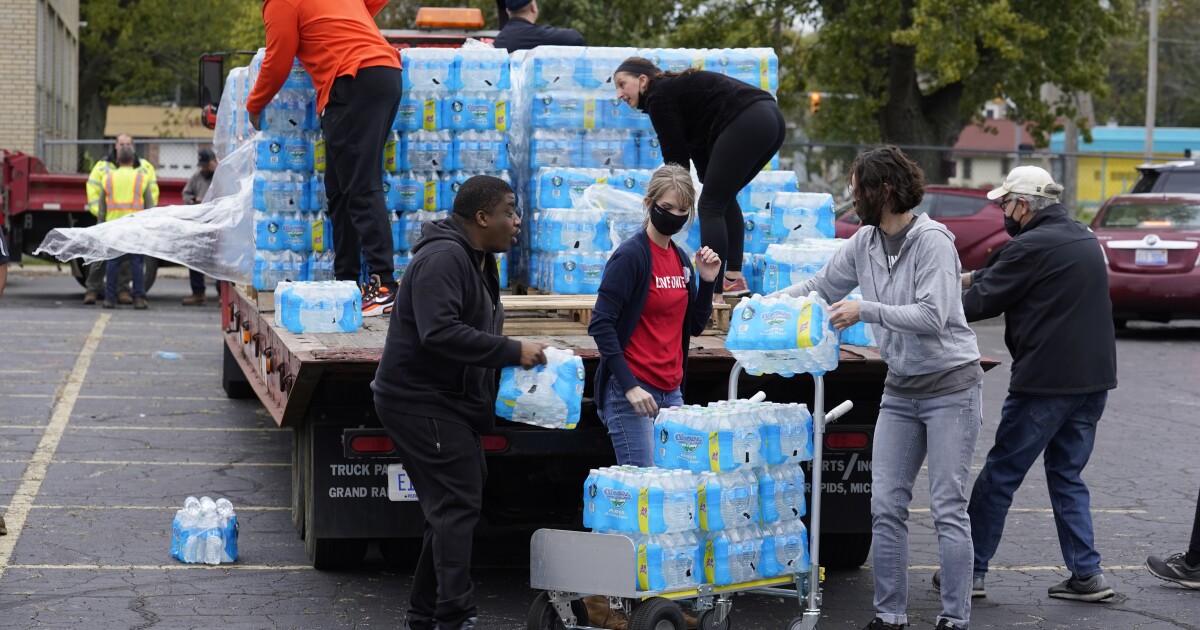 Shortly after sunrise on a recent Saturday in Benton Harbor, Mich., residents began lining up for free bottled water so they could drink and cook without fear of the high levels of lead in the city’s tap water.

Free water distribution sites are a fixture of life in the majority Black city, where almost half of the nearly 10,000 residents live below the poverty line. For three years, tests of its public water system revealed elevated levels of lead.

Waiting for bottled water is time-consuming and some residents wonder why, in a state that recently dealt with the Flint water crisis, the problem wasn’t fixed sooner.

“It’s tiresome,” said Rhonda Nelson, waiting in line at a site run by the Boys & Girls Clubs of Benton Harbor.

“I understand what Flint was going through, I really do,” she said.

Michigan Gov. Gretchen Whitmer has promised to spend millions of dollars to replace the city’s lead service lines within 18 months — a blistering pace for a process that often takes decades. For now, residents have been warned not to cook, drink or make baby formula with tap water.

Residents worry what the elevated lead levels mean for their families’ health. The problem is inconvenient and stressful. Drivers line up at water distribution sites early, pulling people away from jobs and family, and water must be used carefully so it doesn’t run out. Waiting in line has consequences — idling uses gas drivers have to pay to replenish.

Lead exposure can slow cognitive development, especially in young children, according to the Centers for Disease Control and Prevention, and federal officials say no amount of lead in drinking water is considered safe for their consumption. In recent months, activists have pushed for more aggressive action, and the state has ramped up its response.

Some wonder whether the problem would have been handled more quickly if Benton Harbor’s residents looked more like those in neighboring St. Joseph, who are predominantly white.

“Sometimes you just have to call out racism, and that’s what it feels like,” said Ambie Bell, distributing water to residents.

Flint’s lead water problem started when it switched its water source to the Flint River without proper treatment, corroding lead pipes. But Benton Harbor’s water source, Lake Michigan, is considered safe and many other places get water there.

“Our problem is clearly our own infrastructure,” City Manager Ellis Mitchell said.

On Tuesday, the Environmental Protection Agency identified a range of violations at Benton Harbor’s water facility — problems so bad that the city needs to consider forfeiting ownership, the EPA said.

“The people of Benton Harbor have suffered for too long,” EPA Administrator Michael Regan said in a statement.

Water systems occasionally produce high test results, but in Benton Harbor, authorities haven’t been able to bring them down. The long-term fix involves replacing some 2,400 pipes that may contain lead, state officials said.

After Flint’s water crisis, Michigan tightened requirements for lead in drinking water in 2018, boasting it had passed the nation’s most protective law, and mandated that old lead service lines be replaced.

Environmental groups and local activists filed a petition over Benton Harbor in September with the EPA, urging aggressive action.

Michigan officials say they have taken the problem seriously.

In 2019, local officials offered Benton Harbor residents filters designed to reduce the amount of lead in drinking water. Eric Oswald, director of the state’s drinking water division, told a hearing on the issue last month that officials are studying the filters to make sure they work properly. They have also worked on corrosion control to reduce the lead entering water from pipes. While lead sampling results overall are still too high, the proportion of high readings has decreased, officials said.

EPA inspectors, however, knocked the city for failing to notify water customers in their water bills about the problem.

Dr. Mona Hanna-Attisha, a pediatrician and professor at Michigan State University who raised early alarms about Flint, gets questions from parents about whether some developmental problem could be linked to lead in water. It’s extremely difficult, however, to draw a link between an individual’s health problem and lead in the water.

“That’s why lead poising has evaded diagnosis, treatment and prevention for so long,” she said, adding that exposure to lead isn’t safe for children and it’s too soon to predict what the long-term impact may be. It can depend on factors such as poverty, too, making it especially important to address the issue in cities such as Benton Harbor, she said.

Sylvester Bownes, who wears a prosthetic on his right leg, said he has consumed bottled water for years because he doesn’t trust Benton Harbor’s water.

Pushing a cart filled with cases of bottled water a half-mile to his home, he said a water main rupture had temporarily shut off the public water supply, so with no running water, he not only needed bottled water for drinking, but for basic needs like filling his toilets.

Previous Ridley-Thomas turns council fight into one for voting rights
Next Meet Glaive, the 16-year-old star of the hyperpop revolution