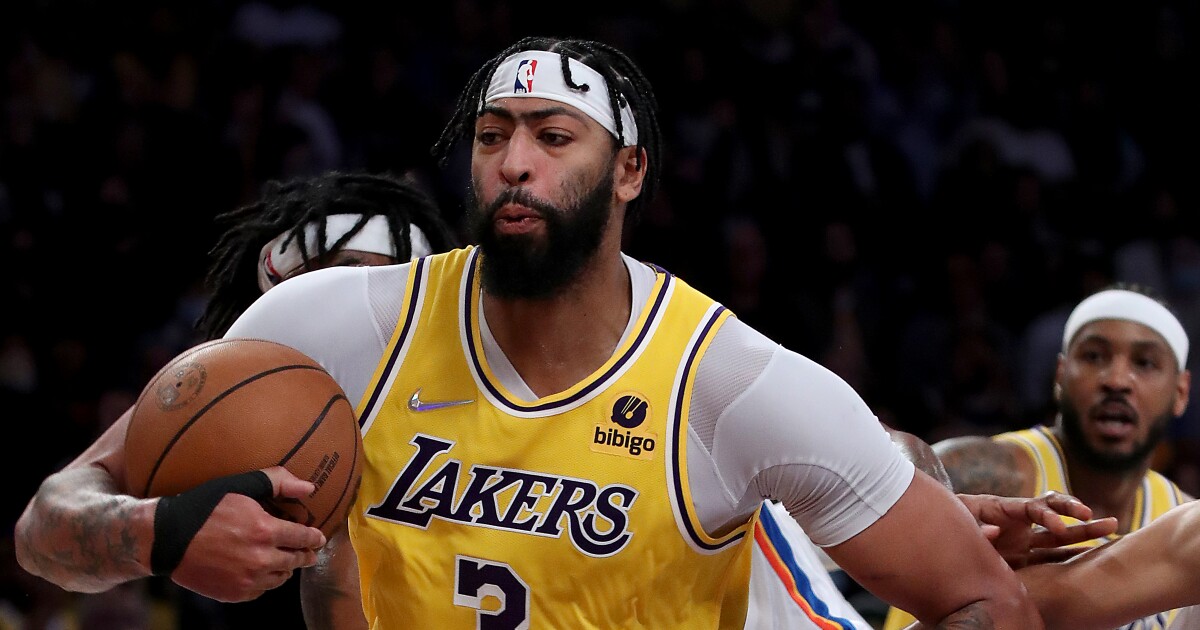 Anthony Davis sat down with a hoodie covering most of his face, black tape covering his sprained right thumb, his voice barely above a whisper when he was asked how the injury affected him in the second half of the Lakers ‘game Thursday night at Staples Center.

But Davis didn’t appear to play with the same force after he was injured.

He was asked about playing Saturday night with the Lakers in Portland.

Here are five takeaways from the Lakers’ 107-104 loss to the Oklahoma City Thunder:

1. Having Davis get injured on top of the Lakers losing LeBron James to an abdominal strain hurt them.

Davis had been nearly unstoppable in the first half against the Thunder, making his first seven shots.

But late in the second quarter, Davis said he hit Shai Gilgeous-Alexander’s thigh and his thumb “bent back.”

“Swelled up pretty bad, blood all up in my fingernail, stuff like that, really couldn’t move it,” Davis said. “Stay out there and tried to finish the game.”

2. Asked about his last two plays in the game, Russell Westbrook turned prickly.

He had turned the ball over with 21 seconds left and the Lakers down 103-101. He had dribbled the ball up court and wound up throwing it out of bounds.

With the Lakers down three, Westbrook missed a three-pointer with 3.5 seconds left.

He finished with 27 points, six rebounds and five assists, but those last two plays stood out.

So, Westbrook was asked, what happened on the turnover and the three-pointer.

“You saw it,” Westbrook said. “Don’t ask me the questions you know the answers to. You seen it.”

Westbrook was told that he was being asked to explain how those two plays unfolded in his view.

“Naw. Naw. Just watch the game. You see what happened,” he said. “Lost the ball. I missed a three. Nothing to it. Appreciate ya’ll.”

He got up and walked away.

3. The Lakers built a 19-point lead in the second quarter and still lost.

But then again, that’s nothing new.

They had a 26-point lead against the Thunder last week in Oklahoma City and lost that game too, another collapse against a team that has just two wins — both against the Lakers.

The Thunder ripped the Lakers’ defense apart in the fourth, scoring 35 points, making 52% of its shots and 50% of its three-pointers (six of 12).

“Defensively we were all over the place,” Davis said. “I feel like they were waiting on our coverages and they were just picking us apart. Whether it was a jump shot or then toward the end just passing it to the right guys. For some reason, this team comes in [and] every time they make shots against us. They made 15 threes again tonight. Um, like they did first game and it’s guys who we want shooting the ball. They made shots. But we were still supposed to win the game.”

4. Carmelo Anthony tried to put the Lakers on his back in the fourth quarter, coming up big time and time again.

But Anthony didn’t get to take the final three-pointer. That was Westbrook — a miss.

Anthony finished with 21 points and made half of his 10 three-pointers.

5. The Lakers had their three-game winning streak snapped and are now 5-4.

Previous Things to do in L.A., Movies: ‘Real Women Have Curves’
Next India News | Congress Forms Sub-committees to Plan, Coordinate Celebrations of 75th Year of Independence