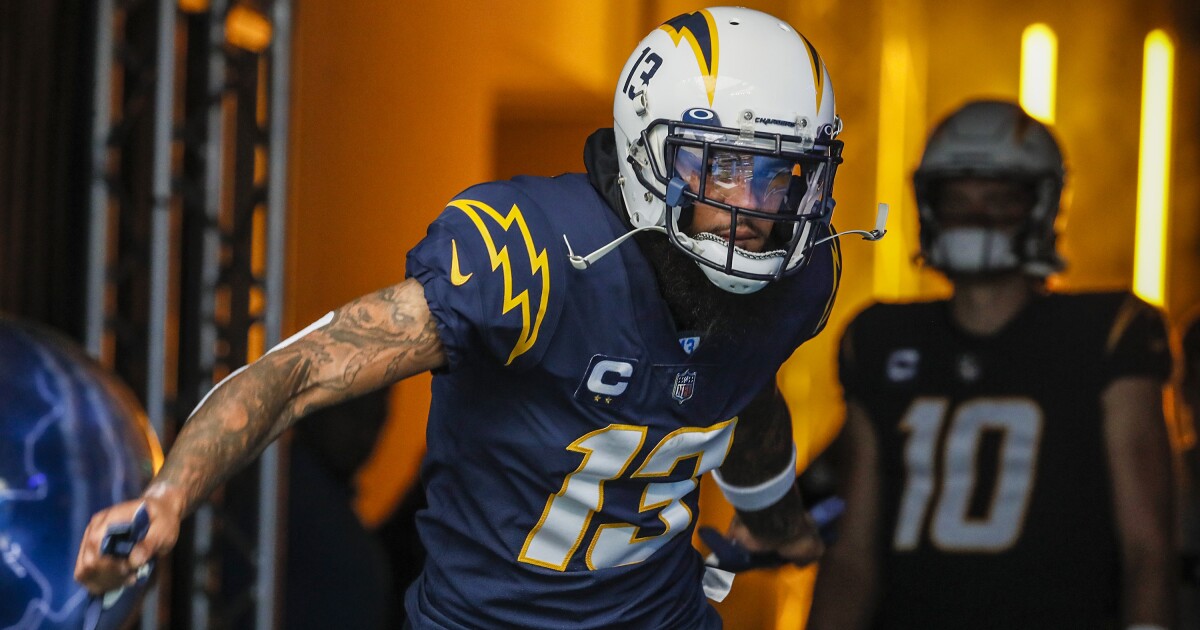 He made only five of 21 field-goal attempts last month in Golden State’s season-opening victory over the Lakers.

Two nights later, Stephen Curry went 16 of 25 and scored 45 points in a win over the Clippers.

Considering those types of numbers, coach Brandon Staley tempered any concerns about Keenan Allen, the normally reliable Chargers wide receiver who entered Week 9 tied for second in the NFL with six drops.

Staley, a former high school basketball standout in Ohio, likened Allen’s performance to a shooting slump an NBA player such as Curry might experience.

“It’s just a tough stretch because he’s such a fantastic player who has fantastic hands,” Staley said. “So I see it more as an aberration.”

Later, he added, “Keenan Allen is going to be just fine.”

In losing back-to-back games, the Chargers’ offense has repeatedly sputtered. The group has generated more three and outs (six) than touchdowns (four) while falling to Baltimore and New England.

The struggles have come against two respected defensive coaching staffs but also immediately after the Chargers torched Cleveland for 47 points, an outburst that included three touchdowns in the final eight minutes.

The production of quarterback Justin Herbert has fallen amid regular pressure, an abundance of defensive disguises and far too many drops.

Sunday against the Patriots, running back Austin Ekeler failed to secure a pass that slipped through his hands and ended as an interception. Allen and Williams also couldn’t hold on to third-down throws that would have extended drives.

“You know that you’ve got good players and you’ll break out of it because those guys will perform,” offensive coordinator Joe Lombardi said. “I don’t think we’re going to have those kinds of drops consistently.”

The offensive issues have come at a time when the Chargers continue to search for a third receiver to complement Allen and Williams. The need has been made clearer with Williams’ recent statistics.

After opening the season with career-best production, he has just four catches for 46 yards and no touchdowns the last two games. Williams dealt with a knee injury last month but has since pronounced himself healthy.

“I don’t think there’s been a major change in the player from what you saw earlier…” Lombardi said. “You know, small sample size. I think he’ll get back on the stat sheet in a big way soon.”

A year ago, the Chargers had Tyron Johnson and Jalen Guyton emerge as speedy deep threats, the pair accounting for three touchdown receptions of at least 53 yards.

Johnson failed to make the roster this season and now is mostly sitting on the bench for Jacksonville. Guyton has only 10 receptions for 139 yards after catching 28 passes for 511 yards in 2020.

In April, the Chargers selected Joshua Palmer out of Tennessee in the third round, the rookie not used much through the first five weeks.

But he played extensively against Baltimore after Williams left as a precaution because of his knee problem. Palmer then produced his first career touchdown Sunday.

He beat two New England defenders on a 50/50 ball as the Chargers closed within 27-24 in the final minute. The comeback attempt ended when the Patriots recovered the ensuing onside kick.

“It was definitely a special moment,” Palmer said. “If we got the onside kick and were able to tie the game, it would have hit better.”

Staley said both Palmer and Guyton regularly stay after practice to work longer with Herbert, the three of them attempting to build more familiarity. That sort of commitment, Staley suggested, can only help the Chargers rediscover their production.

“That’s going to be good for our offense,” he said. “We need that from Josh and Jalen, to step up behind Mike and Keenan in order for us to be the offense we’re capable of.”

Herbert returned to practice as a full participant after being limited Wednesday because of a throwing hand injury. He hurt himself late in the game Sunday. … Starting cornerbacks Michael Davis (hamstring) and Asante Samuel Jr. (concussion protocol) remain out. Backup safety Alohi Gilman (ankle) and No. 2 running back Justin Jackson (quadriceps) also didn’t practice.