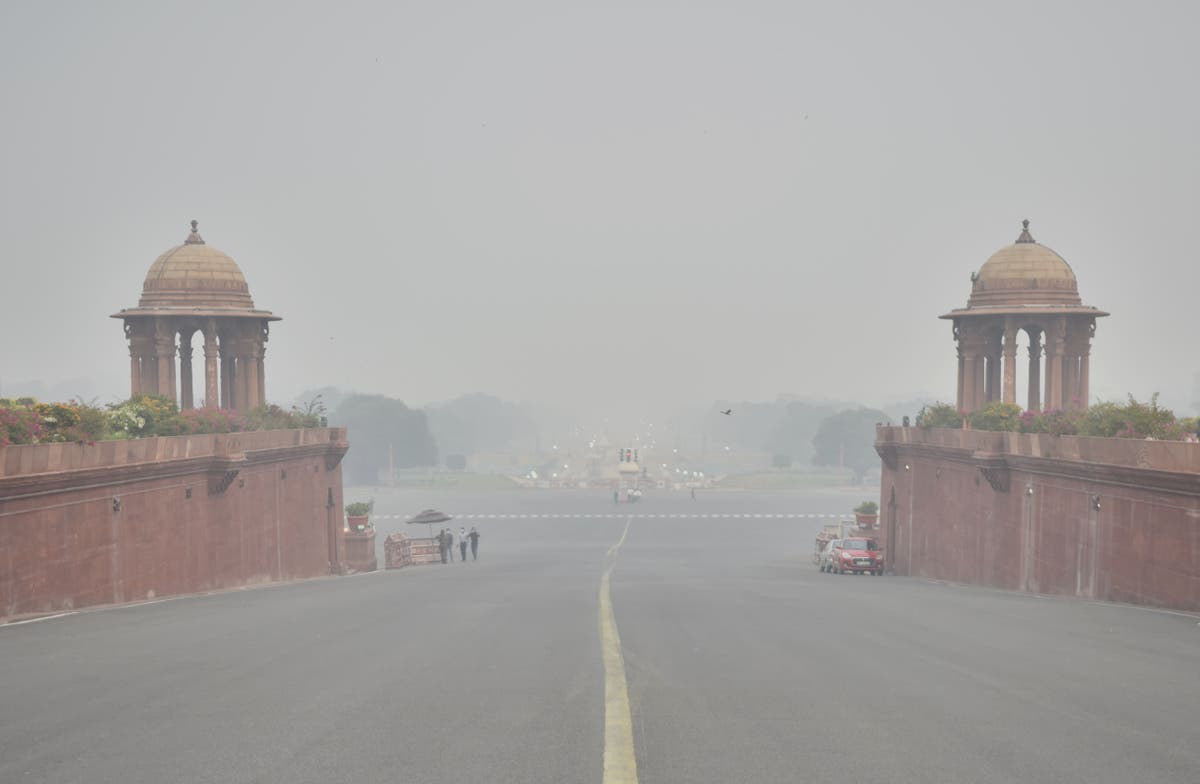 A day after India celebrated Diwali, its national capital Delhi woke up shrouded in smoke and unbreathable hazardous air after many thousands of people burst fireworks through the night in already unfavourable environmental conditions.

The Air Quality Index (AQI) readings in the world’s most polluted capital city hit the maximum reading of 999 in several places, while many breathed “very poor” to “hazardous” air across Delhi and its surrounding areas, live data from the World Air Quality Project’s website showed. In sharp contrast, major southern Indian cities such as Chennai and Kochi were recording AQI levels of 90 and 50.

The World Health Organisation’s prescribed safe limit for the concentration of PM2.5 (small particulate matter) is 25.

But the PM2.5 levels in Delhi on Friday morning were over 40 times higher. At the Jawaharlal Nehru football stadium in central Delhi, PM 2.5 levels were recorded at 999 microgram per cubic metre.

Deadly PM2.5 particles are less than 2.5 microns in diameter, meaning they can penetrate the lungs and enter the blood system, potentially causing cardiovascular and respiratory diseases including lung cancer. Immediate complications include coughing, breathing difficulties and irritation in eyes, nose and throat.

Environmentalists have pointed out that the reading is showing 999 because they cannot record poor air quality beyond three digits, signalling that Delhi’s air could, in fact, be even worse.

“This morning, we are in a hell of our own creation as #CrackerBan goes up in smoke #AirPollution,” said BBC Online journalist Geeta Pandey, referring to the fact that Diwali fireworks have formally been banned this year by the Delhi government.

While the pollution level has remained unhealthy in Delhi throughout this week, hovering between the “poor” and “very poor” ranges of AQI, it reached the “severe” level after many resorted to bursting crackers to celebrate the Hindu festival of Diwali. Loud bursts were heard throughout the evening and night on Thursday, as well as Friday morning.

These celebrations came despite warnings from experts that emissions from fireworks, if unchecked, could exacerbate the smog already sitting in place due to unfavourable meteorological conditions including slow winds and below-normal temperatures. Delhi’s winter air pollution is caused by a mix of factors that include smoke from farm fires in northern India, vehicle emissions, industrial plants and dust particles from a constantly work-in-progress and under-construction city.

Trends from the last few years indicate that it will be a few weeks before the smog disperses, and several months before Delhi’s AQI will again dip into the “good” category.

India’s prime minister Narendra Modi, who a few days earlier told the Cop26 climate summit in Glasgow that India would achieve net zero carbon emissions by 2070, observed Diwali with a visit to an army base not far from the Pakistan border in Nowshera, Jammu and Kashmir.