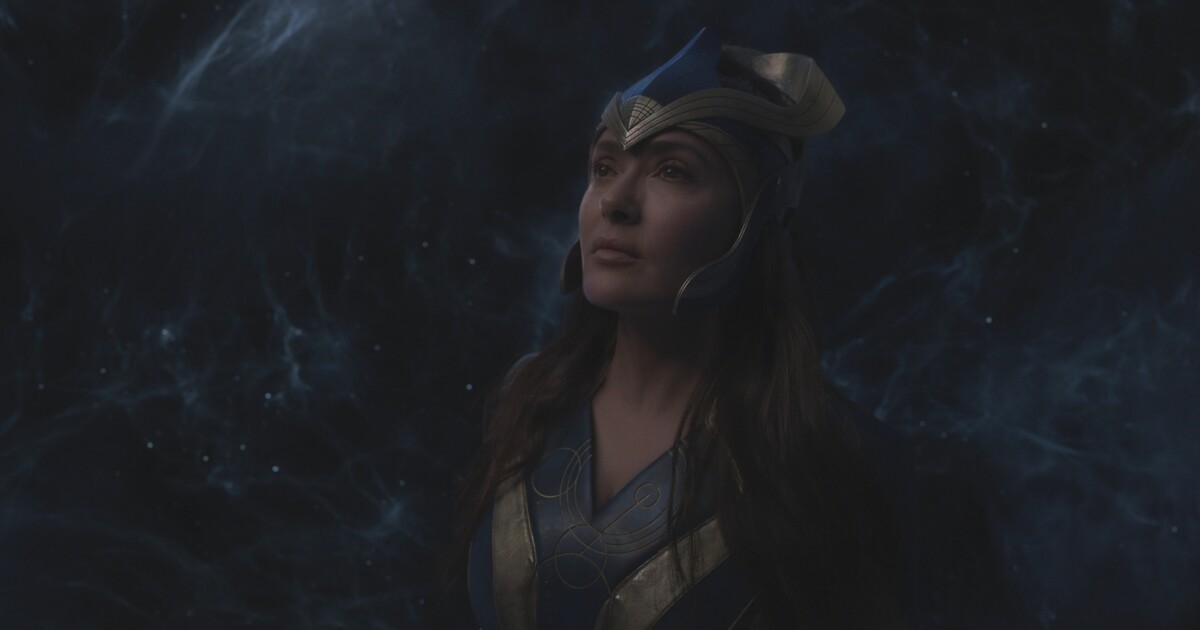 When Salma Hayek first learned that Marvel Studios wanted to cast her in a movie, she figured it was to play somebody’s mother. But that’s not quite how it played out.

Instead, when she met with director Chloé Zhao and producer Nate Moore over Zoom, they asked her to play Ajak, the leader of a group of immortal extraterrestrial beings sent to Earth to protect humans from a specific alien threat.

“I was very surprised,” said Hayek during a recent video call. “A superhero? Me? It was so confusing … I couldn’t understand how I got there. It’s like all your dreams coming true.”

Introducing a whole new class of heroes into the Marvel Cinematic Universe, “Eternals,” out Friday, tells a story spanning thousands of years. Based on the comic books by Jack Kirby, these powerful Eternals have been tasked by cosmic beings known as the Celestials to watch over humanity, intervening only to protect them from alien creatures called Deviants.

“[Ajak’s] superpowers are healing,” explained Hayek. “I heal, and I also talk to the Celestials. It’s the perfect thing for a leader, [because] I think all leaders should have the spirit of a healer.”

In the film’s present day, the Eternals have disbanded. Believing they had neutralized the threat of the Deviants, a number of them are living their own lives among humans. But when it becomes clear that their longtime foes have returned, it’s time for a family reunion.

According to Zhao — the Academy Award-winning “Nomadland” director who is also a writer on “Eternals” along with Patrick Burleigh, Ryan Firpo and Kaz Firpo — Ajak is “someone who has lived millions of years … just doing the impossible, over and over and over … yet still is capable of recognizing love, and recognizing her own mistakes, and able to make [difficult] decisions” for her team.

The role required “a woman with the heart the size of the ocean,” said Zhao. “Salma has lived such an extraordinary life, and yet she’s still so open and so loving as very much a mother figure. … She was perfect.”

Hayek, who was a fan of Zhao’s previous work including “Songs My Brothers Taught Me” and “The Rider,” said it was humbling to be approached for such a role.

“Sometimes what moves you really hard are the things you least expect,” said Hayek. “If you reject me, and you tell me, ‘You’re no good,’ I’m not gonna cry. But in this moment, where I felt seen and accepted, immediately it made me feel something and it made me want to cry — but I didn’t, I held it in.

“They came and got me,” Hayek added. “In my 50s. Arab-Mexican. [A] curvy woman … Not your typical superhero. Especially not one that was male” in comic books.

Arriving on the heels of films such as 2018’s “Black Panther” and September’s “Shang-Chi and the Legend of the Ten Rings,” “Eternals” has been lauded as one of the most inclusive MCU movies to date. Beyond the diversity of its cast, the film boasts multiple representational milestones for the long-running superhero franchise.

Zhao has previously mentioned that seeing the diversity that was already written into the treatment was one of the reasons she was drawn to the project. According to Hayek, the film’s diversity also reflects Zhao’s “taste in people” and that the director “just wanted who she wanted because of personal characteristics more than anything else.”

“[The film] is diverse but it was not, like, people just trying to be politically correct,” said Hayek. “It was organic to her. It was important to her but it was organic.

“That was beautiful,” she added. “I really felt like I was going to be part of something historical. Groundbreaking. It breaks so many walls.”

Known for casting nonactors in her films, Zhao said she draws as much from real life as possible and values the points of view her actors brings to their characters.

For Ajak, Zhao was pleased Hayek brought her experiences and perspectives as a mother to add qualities to the character that were not necessarily on the pages of the script.

“She was able to bring a personality to Ajak that’s so relatable,” said Zhao. “She came in and said, ‘Look, a mother lectures her children,’ ‘a mother is going to this-and-that.’ I’m not a mother, she is. She brought a lot of personality to Ajak so we can see her, not just as this holy mother that was on the page … [but as] a slightly flawed human being, and that’s what I need from my cast.”

Hayek recognized Ajak is not quite the typical leader depicted or celebrated in superhero blockbusters. In addition to being the mother figure for all of the Eternals, Ajak is not one of the team’s mightiest fighters.

“It was very interesting to play a different kind of leader, one that I took a lot from motherhood,” said Hayek. As a leader and a mother, “You have to guide [and] you cannot do it without love. You understand that the best way to do it is through love. And you have to let them be. Chloé said my character has to make really difficult, impossible decisions. And mothers are many times confronted with that.”

Leading with love, according to Zhao, is one of the big messages in this film of cosmic scale.

“Love is the one thing the Celestials didn’t necessarily predict could be so powerful, even though they’re the most advanced beings in the worlds,” said Zhao. “Ajak is, in the end, a mother. It was her children — their strengths, their weaknesses, their heroic moments, their tragedies — that made her realize something about this planet is different. Because her children, even as perfect as they used to be, they’re messed up. That actually made her realize these flaws in humanity are actually their strengths as well.”

Ajak is just one of the characters who represents a different kind of strength, and different kinds of heroics, among the Eternals. And it’s the different decisions that are made, grounded in love, that are embraced in this story.

“I grew up with different concepts of heroes in fantastical, allegorical storytelling,” said Zhao. “The idea [is] having the audience consider a different meaning of what it means to be heroic. … Ajak, a mother’s love, self-sacrifice — things like that are heroic. It’s not just about strong punches.”

Previous When 5G wireless arrives, your 3G phone will become a brick
Next Inglewood players defend their 106-0 win over Morningside