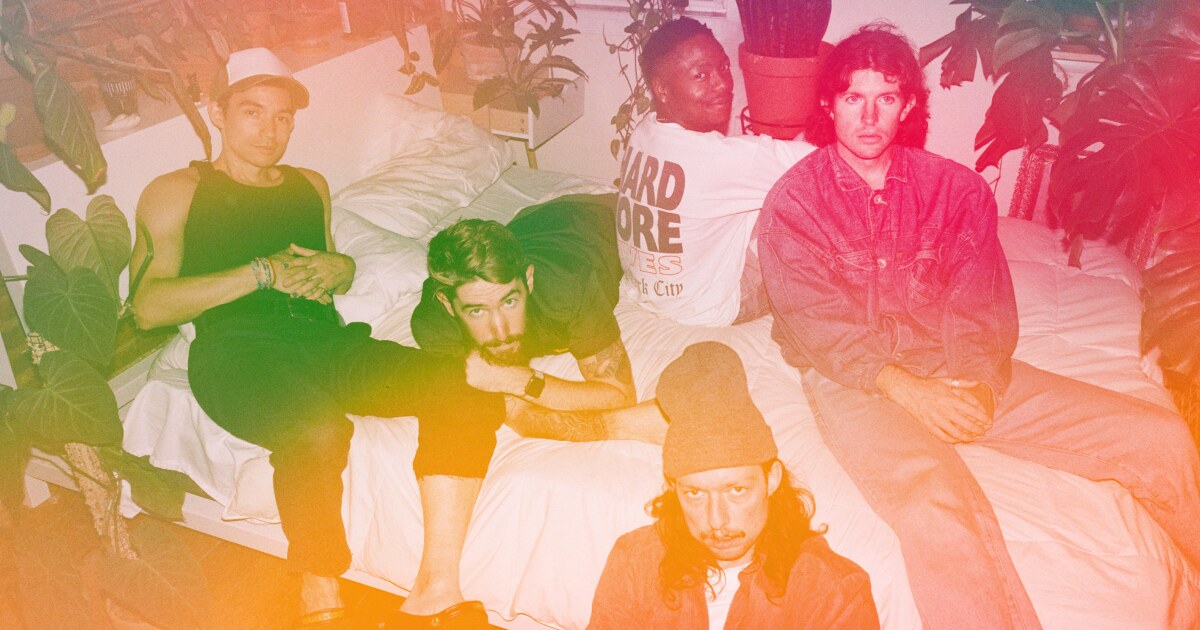 If punk is what you make of it, Turnstile has made it bend, shake and groove at its will.

Both lovingly and dismissively referred to as the “boy band” of American hardcore, the fresh-faced Baltimore five-piece planted a flag in the mainstream this August with its third album, “Glow On.”

A survey of hardcore interpolated by upbeat synth-pop, funk and Caribbean rhythms, “Glow On” posed a challenge to genre fundamentalists, as well as the band’s fanbase — but the album peaked at No. 30 on the Billboard 200, a rare feat for a hardcore act.

But even rarer is Turnstile’s approach: If you can mosh to it, you should be able to dance to it, too.

Awash in the sunlight from his bedroom window in Baltimore, frontman Brendan Yates, 31, describes the band’s unorthodox sounds — whether it’s the skittish new wave guitar riffs of “New Heart Design” or the steel-toed soca of “Don’t Play” — with the cryptic, cool repose of a zen master.

“There’s no formula for what feels right,” he says over Zoom, ahead of the band’s Saturday and Sunday shows at the Shrine Auditorium.

“Sometimes we try a new thing for a second, then move on. But I think every idea is worth watering and seeing if it can grow to be how you imagine it in your head.”

On their 2018 major label debut “Time & Space,” a nod to a 1972 B-side by the Ohio Players, Turnstile’s wanderings into soul and R&B left punk purists sputtering incredulously across the internet. Yet punk in the DMV, or that pocket of the Eastern Seaboard where D.C., Maryland and Virginia meet, was uniquely shaped by go-go, a homegrown funk offshoot made popular in the ’80s and ’90s by artists such as Chuck Brown and the group Trouble Funk. During the simultaneous rise of go-go and hardcore in 1980s D.C., future punk luminaries Dave Grohl (then of the band Scream) and Ian MacKaye of Minor Threat frequented go-go parties.

“Go-go is our country music,” says Yates. “We have that sonic connection. People from the outside might come in and be like, ‘That’s not hardcore, that’s this genre!’ People want to protect what they already know. But there’s a very fluid approach to music here.”

In the summer of 2020, the band took their eclectic vision for “Glow On” to Phantom Studios in Gallatin, Tenn., where they recorded with Mike Elizondo, who’s worked with everyone from Dr. Dre to Avenged Sevenfold to Fiona Apple.

“His perspective opened up a whole new dimension of what a song could be,” said Yates, who co-produced the record with Elizondo.

The band also invited experimental R&B star Devonté Hynes, a.k.a. Blood Orange, to lend his own shine to “Glow On.” In his studio in Los Angeles, Hynes recorded lead vocals for the sad boy furor of “Lonely Dezires” and breathed sensuality into the dream-pop ballad “Alien Love Call.” On the latter, Yates’ usual youth-crew yawp is tenderized by heartache and isolation — emotional realms he’s started to feel safe exploring.

“Every person has their own unique set of DNA based on where they’re from, who their inspirations are, their life experience — and that’s an exciting thing,” says Yates. “We look at music in a similar way.”