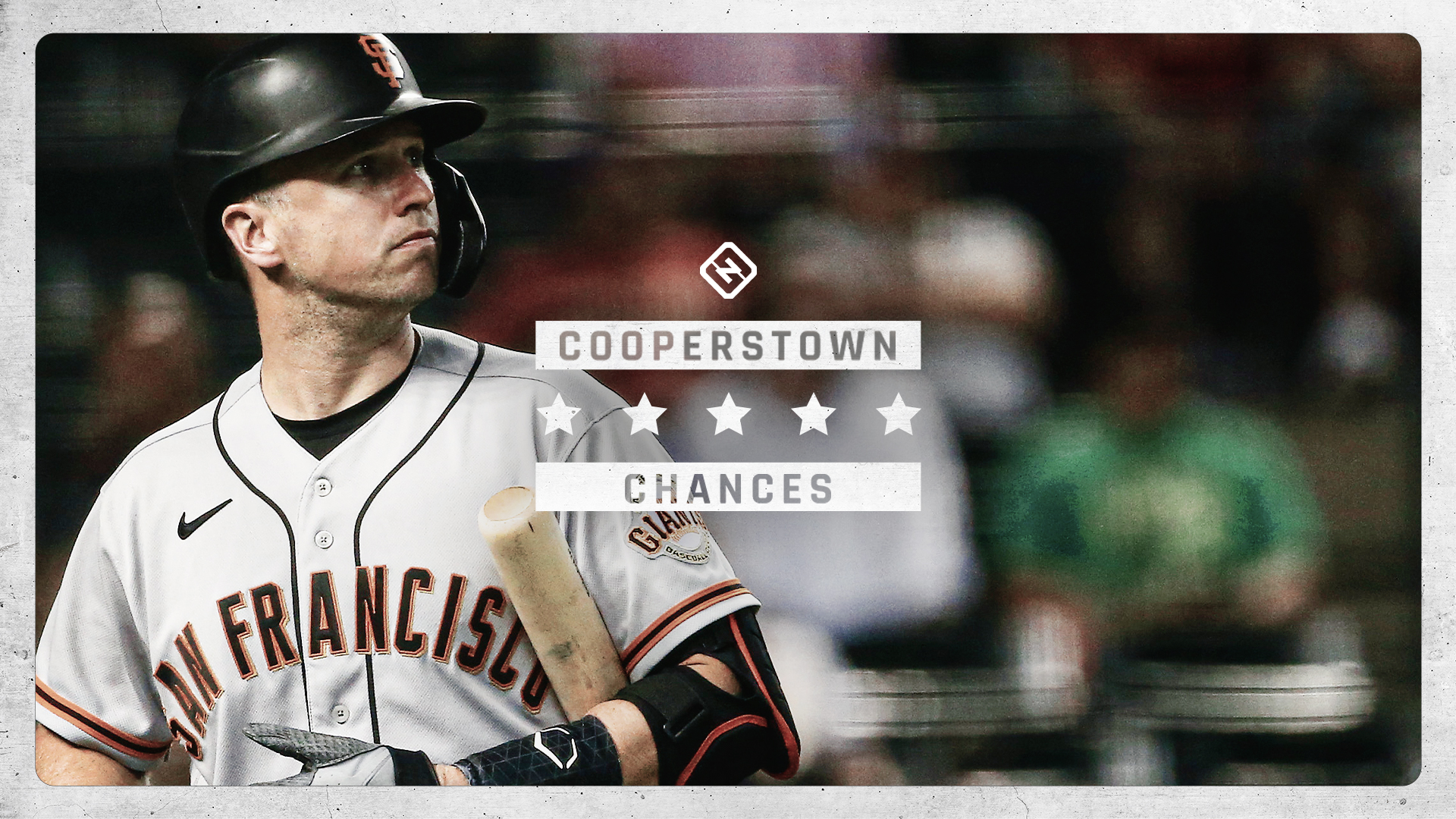 An unforgettable era of baseball in San Francisco is ending. Buster Posey, the iconic catcher who was the heart and soul of three World Series-winning Giants teams during his 12 seasons in the majors, is retiring, as first reported by The Athletic on Wednesday and confirmed by multiple sources.

Posey made it official on Thursday.

Posey is still young, at just 34 years old. That means he’ll make his first appearance on a Hall of Fame ballot — assuming he doesn’t get the competitive itch and make a comeback — in December 2026, five years after his last game (October 2021).

Posey clearly still can compete at the highest level. He batted .304 for the Giants in 2021, leading the club to a franchise-record 107 victories and the NL West title. But he’s done playing ball, and the second question that pops to mind is this: Will he wind up in the Hall of Fame? The first, of course, is “how do the Giants live without Posey?”

There’s no doubt that, during his career, Posey “felt” like a Hall of Fame player, for whatever that means. But does he have the numbers in his short career — he played his first game in the majors at 22 years old and his last game at 34 — to back up the narrative?

Posey checks boxes, as they say. He won the 2010 NL Rookie of the Year and the 2012 NL Most Valuable Player award. He was a seven-time All-Star, four-time Sliver Slugger and won a Gold Glove (and would have had more if not for Yadier Molina). All very impressive. But right at the top of the list: three World Series titles.

The titles are where most proponents of Posey’s Hall of Fame candidacy start, and with good reason. The Giants almost certainly don’t win any of the three without Posey, who was the team’s unquestioned leader, the heart and soul of their never-say-die, whatever-it-takes mentality that propelled them through multiple Octobers. The franchise had moved from New York to San Francisco after the 1957 season, and had yet to win a World Series. The Giants got there in 1962, 1989 and 2002, but lost in seven games in 1962 and 2002 and were swept in 1989, the earthquake year.

Posey changed everything. From pretty much the moment he arrived in the bigs with the Giants, it was clear he was different, and the impact on the team was immediate: the Giants won the 2010 World Series, missed the playoffs when he spent most of the season injured in 2011 and won it all again in 2012, after Posey’s MVP season. Posey finished sixth in the MVP race in 2014 and the Giants snuck into the playoffs with 88 wins, then raced all the way to yet another even-year World Series title.

Other teammates played the role of hero — who can forget Cody Ross’ home run barrage during the 2010 playoff run, Pablo Sandoval homering three times in Game 1 of the 2012 World Series (twice off Justin Verlander!) or Madison Bumgarner’s utter dominance in the 2014 World Series? — but Posey was the catalyst, the touchstone, the unwavering champion.

And it’s not just about the postseason titles for Posey. He was an outstanding hitter, regardless of position. Looking just at catchers, he was elite. He finished with a career batting average of .302, a career on-base percentage of .370 and a career OPS of .831. Here’s the full list of AL/NL players who caught at least 1,000 games and reached those totals:

Now, of course, that’s just looking at three of Posey’s best stats. It’s not to say he’s the fourth-best hitting catcher in baseball history, to be clear. Johnny Bench, Roy Campanella, Gary Carter, both Pudges and Yogi Berra (among others) were better hitters than Posey, but just didn’t happen to match Posey in those three particular categories. Still, it lends perspective to what Posey did particularly well.

The question is this: Was he healthy and productive for long enough?

Posey’s career was short. There’s no other way to look at it. He played only 12 seasons in the majors, and really only 11 because his 2009 season in the bigs consisted of just seven games as a September call-up. He opted out of playing during the pandemic season of 2020, and he had a great reason: He and his wife had just adopted infant twins, and his priority was being at home to help raise the babies. Really, we should have talked about that in the section about the case for Posey, because it speaks to what type of wonderful human being he is.

Of those 12 seasons (11 really), Posey played more than 114 games only six times. That’s … not many.  And he was primarily a catcher, but not solely a catcher. Posey started 1,063 of his 1,371 career games at catcher and 201 games at first base; he never started more than 122 at catcher in any season. He actually started a higher percentage of his games at catcher in his last two seasons (2019 and 2021) than any of his previous “full” seasons — 198 of his 204 games started were as a catcher.

Because his career was short, he doesn’t even come close to any of the “milestone” counting numbers. He finished with exactly 1,500 hits (round number stats are fun), 158 homers, 729 RBI, 293 doubles and 663 runs. If he’s elected, his counting stats wouldn’t be last among position players in Cooperstown, but they’ll all be way down near the bottom.

And since this is a section looking at flaws in the resume, let’s get nitpicky about the postseason. No doubt, if you’d ask anyone with the franchise, they’d tell you he was the most valuable player every time he stepped on the field, even if he never was the actual NLCS or World Series MVP. His overall offensive numbers in the last two rounds are, well, not great.

Look, there no doubt about Posey’s impact on those three World Series titles. And maybe it’s just me, but it feels a bit odd to use postseason success as a foundational element for a Hall of Fame resume when he was just OK at the plate (at best) during the last two rounds of the postseason, right?

It’s hard to find a similar catcher in the Hall, to be honest. Most of the catchers in the Hall had long, long careers: Johnny Bench, Gary Carter, Carlton Fisk, Ivan Rodriguez, Yogi Berra and Ted Simmons all played more than 2,100 games. Posey, you’ll remember, played only 1,371. Roy Campanella played 11 years and 1,215 games before the car accident that ended his career, but he was a vastly superior power hitter (and hitter in general). In Posey’s similarity scores section on Baseball-Reference, Carlton Fisk is No. 3 on “similar batters through Age 34” but Fisk played another 11 seasons and 1,190 games after his Age 34 season, so he’s out, too.

Closest is probably Mickey Cochrane, who starred for the Philadelphia A’s from 1925 to 1933 and finished his career with the Detroit Tigers, from 1934 to 1937. And it’s not a great comp, for reasons beyond just the vastly different eras, so we won’t dig in a ton here. Cochrane’s career ended in 1934 when he was hit in the head with a pitch, in the era before batters wore helmets. Like Posey, he was well regarded in baseball as a great team leader.

Thurman Munson’s life was tragically cut short in an airplane crash during the 1979 season, when he was only 32 years old. That was his 11th season in the major leagues, all played with the Yankees. The career comparisons to Posey are strikingly similar. Like Posey, Munson won the Rookie of the Year award (1970) and one MVP award (1976) and was a seven-time All-Star. Munson won three Gold Glove awards. Like Posey, Munson’s teams reached the World Series three times, though Munson’s Yankees “only” won two championships.

Posey gets the nod, slightly, as a hitter. Munson had better “speed” numbers — 32 triples, 48 stolen bases, compared to nine and 23 for Posey — but that’s only an aside, not significant. By pretty much every measure, Munson was a very comparable regular season player to Posey.

At the plate in the postseason, though? No comparison at all.

Munson appeared on the Hall of Fame ballot for the first time in December 1980 as part of the class of 1981 — and exception to waiting the standard five years after the last game was made, obviously — and was named on only 15.5 percent of the ballots. Turns out, that was Munson’s highest total, as he never again cleared 9.5 percent in his final 14 years on the ballot.

The ballots were often packed, and the 10-vote limit played a role. For example, the 1981 ballot featured 12 players eventually elected to the Hall of Fame either by the BBWAA or a veteran’s committee. Still, Munson’s lack of support doesn’t seem to bode well for Posey.

If you’ve read this far, you’ll probably agree that’s not a “hot take” statement. It’s just the truth. Posey was brilliant when he played, but his career does not look much like most players enshrined in the Hall of Fame. And if his Giants had gotten knocked out early in the NL playoffs in 2010, 2012 and 2014, maybe we’re not even having this conversation.

But, of course, that’s a silly argument. It doesn’t matter what MIGHT have happened, only what DID happen. And Posey’s Giants won three World Series titles, and he was an integral part to all three, as a catcher, as a leader and as a big-moments hitter. That absolutely matters.

At the same time, points shouldn’t be given to Posey because he chose to retire at 34 years old.Yeah, he was pretty great in his final season, but it doesn’t matter what he MIGHT have done in 2022, 2023 and 2024 (and maybe beyond). It only matters what he DID do which is retire and close the book on his Hall of Fame resume.

So does he get in?

I feel pretty confident he will one day stand on the veranda of the Otesaga Hotel a few blocks from the Hall of Fame, pondering any last-minute changes to his induction speech. It might not be in the first year or two of eligibility, but he’ll eventually get in.