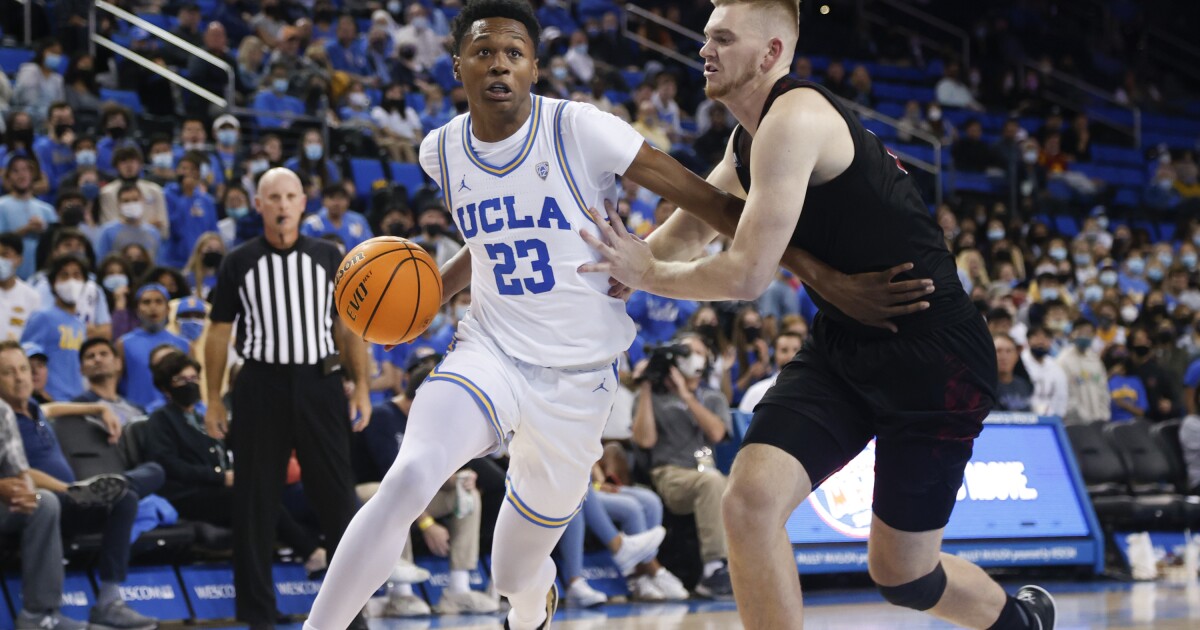 UCLA spaced the floor for its new phenom in the final seconds of the first half, letting him dribble above the three-point line. The freshman approached his defender and unleashed a wicked crossover move, freeing a path to the basket. He accelerated for a monstrous two-handed dunk.

Say hello to Peyton Watson, everybody.

On a night Bruins fans became reacquainted with several veteran players and greeted a handful of new ones after 20 months away from Pauley Pavilion, there was no question who generated the most excitement Thursday.

Watson, a 6-foot-8 guard from Long Beach Poly, followed his dunk by flexing underneath the basket and releasing his own roar. He earned a chest bump from teammate Johnny Juzang on their way toward the locker room at halftime of an exhibition against Chico State that the No. 2 Bruins won in a 100-61 runaway.

“I’m a very emotional player,” Watson said. “I like to play very intensely, with emotion, get the crowd into it, I just think that helps the team get momentum and everybody’s hyped up to play.”

Watson added a breakaway tomahawk dunk and a dunk off an inbounds pass on the way to eight points, eight rebounds, four assists, three steals and two blocks in 22 minutes off the bench. His final block came on a play in which it appeared the Bruins were hopelessly beaten before he used his length to recover and swat a layup.

The stat that most pleased UCLA coach Mick Cronin was Watson’s nine deflections, which revealed his defensive activity.

It was also an impressive debut for graduate transfer center Myles Johnson, who could be the rim protector the Bruins sorely missed over the final two months of last season after Jalen Hill’s retirement. Johnson triggered back-to-back fast breaks with blocks and finished with 10 points, nine rebounds and two blocks off the bench.

Johnson showed how he’s hard to defend, twice raising his massive right arm to call for entry passes that he took for a dunk and a layup.

Playing at home in front of fans for the first time since beating Arizona on Feb. 29, 2020, the Bruins went back to the same four-guard starting lineup that reached the Final Four. Forward Cody Riley was joined by guards Tyger Campbell, Jaime Jaquez Jr., Jules Bernard and Juzang.

Jaquez appeared sturdier than last season, his extra bulk allowing him to use his body to ward off defenders on driving layups. He scored a team-high 23 points on eight-for-eight shooting and Juzang had 19 points against the Division II Wildcats.

Watson was energetic before the opening tip, waving enthusiastically to students who chanted his name during the roll call. He had some first-game hiccups, making only three of nine shots and committing two turnovers.

UCLA was without redshirt freshman forward Mac Etienne (right knee) and sophomore guard Jaylen Clark (concussion-like symptoms) after having previously lost freshman guard Will McClendon for the season because of a knee injury. Though Clark is considered day to day, Etienne is still being evaluated and his timetable for a return is unknown.

The Bruins open the season Tuesday night at home against Cal State Bakersfield.