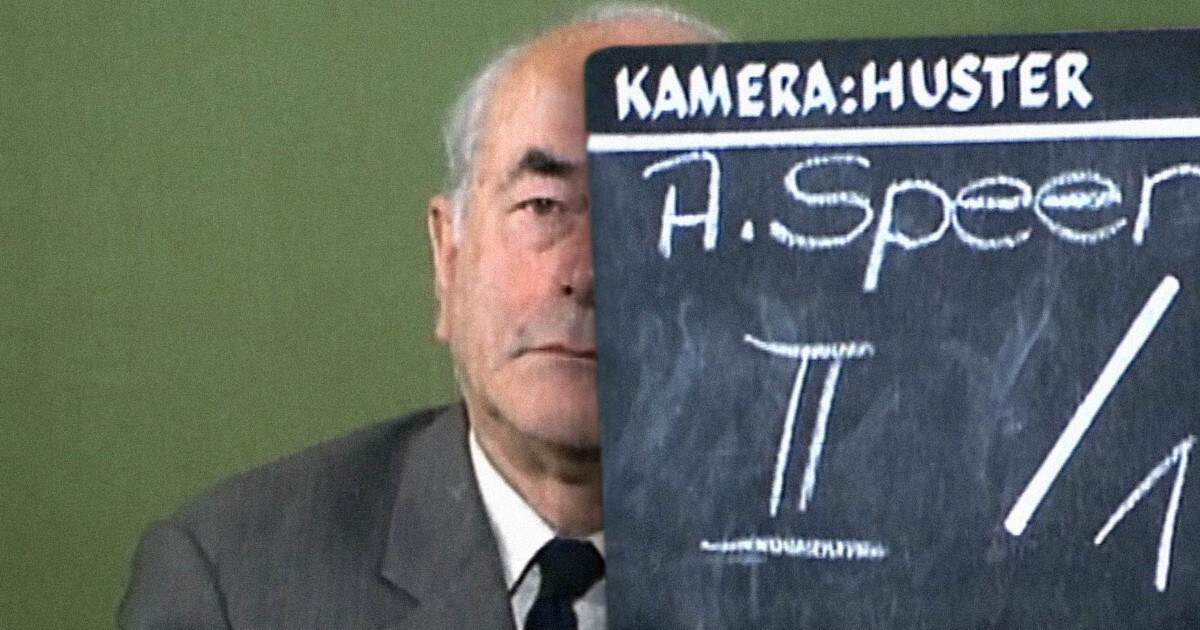 Was Nazi official and Adolf Hitler devotee Albert Speer, the subject of the engrossing, often chilling documentary “Speer Goes to Hollywood,” “recording history or recording his story”? So asks the film’s director, Vanessa Lapa, of Speer’s lengthy 1971 interview with screenwriter Andrew Birkin, around whose audiotapes she masterfully structured this eye-opening portrait.

As efficiently laid out here, Speer joined the Nazi party in 1931 and, two years after, began working as then-Chancellor Hitler’s chief architect, later adding general building inspector for Berlin to his duties. In 1942, der Führer named Speer his minister of armaments and war production, overseeing creation and distribution of weapons and ammunition for use by Nazi armed forces.

Over these years, Speer needed manpower — lots of it — to accomplish his lofty building and munitions goals; his projects were largely staffed with slave labor, much of which eventually came from Nazi concentration camps. By 1944, he had an astounding 14 million workers under him, an estimated one-third of whom died toiling away under hellish conditions. Speer called Hitler’s plan to exterminate the Jews “a waste of labor to us.” What a guy.

Despite being responsible for countless deaths, during the postwar Nuremberg trials Speer somehow was spared the gallows (unlike many of his colleagues and underlings) and sentenced instead to 20 years in prison for war crimes and crimes against humanity. Was it his deceptive testimony, his gentlemanly charisma, a cunning knack for self-preservation or just plain luck that helped him elude the worst-case scenario? It was an astonishing result for a man who told the Tribunal that if Hitler had had any friends, it would have been Speer.

But there was something distinctly Teflon-ish about Speer that would carry through to the 1969 publication of his memoir “Inside the Third Reich,” in which he oxymoronically made himself out to be “the good Nazi” who knew little if anything about the monstrous acts that had unfolded around him. The book effectively whitewashed his role in the Holocaust and became a worldwide bestseller.

This was where Hollywood and Birkin, a protégé of Stanley Kubrick (and brother of actress Jane Birkin), came in: Paramount Pictures, which was developing a fictional biopic from Speer’s book, sent the young writer to visit the ex-Nazi at his Heidelberg, Germany, home to collaborate with him on the script. (Contrary to the doc’s title, “Hollywood” went to Speer.)

The result was 40 hours of taped conversations, though their deteriorated, near-50-year-old quality required Lapa to hire actors Anno Köehler and Jeremy Portnoi to effectively rerecord the voices of, respectively, Speer and Birkin. She cut the edited audio into a gripping narrative and matched it with a stunning assemblage of archival visuals from before, during and well after World War II.

The film features a startling — and startlingly vivid — number of rare clips of Hitler and his most notorious chief lieutenants (including Speer) in action, fascinating footage of the judgments at Nuremberg and harrowing shots of the extermination camps. A glimpse of a specially manufactured iron cupboard used to torture Russian civilian workers won’t easily be forgotten.

But it’s the clearly antisemitic Speer’s often blithe conversations with Birkin as he retells his wartime tale to the writer — or rather the tale he wants the screenwriter to tell — that form the disturbing crux of the film as we see how easily history can be manipulated and erased. (The movie is nothing if not unnervingly timely.)

Worse is that Speer, open and relaxed, appears on some level to persuade Birkin of his self-made truths — or at least the validity of using them in the screenplay — despite obvious contradictions and elusions (and the objections of film director Carol Reed of “Oliver!” fame, with whom Birkin chats by phone).

Lapa, who co-wrote the documentary with Joëlle Alexis, may not explain how or why the movie of “Third Reich” was ultimately never produced, but it was plainly an ill-conceived project from the start. Unlike Lapa’s vivid and vital film, which has much to say and says it well.

In English, German and French with English subtitles

Previous Despite a mixed finish, S&P 500 and Nasdaq notch records
Next College football: Best games to watch in Week 10