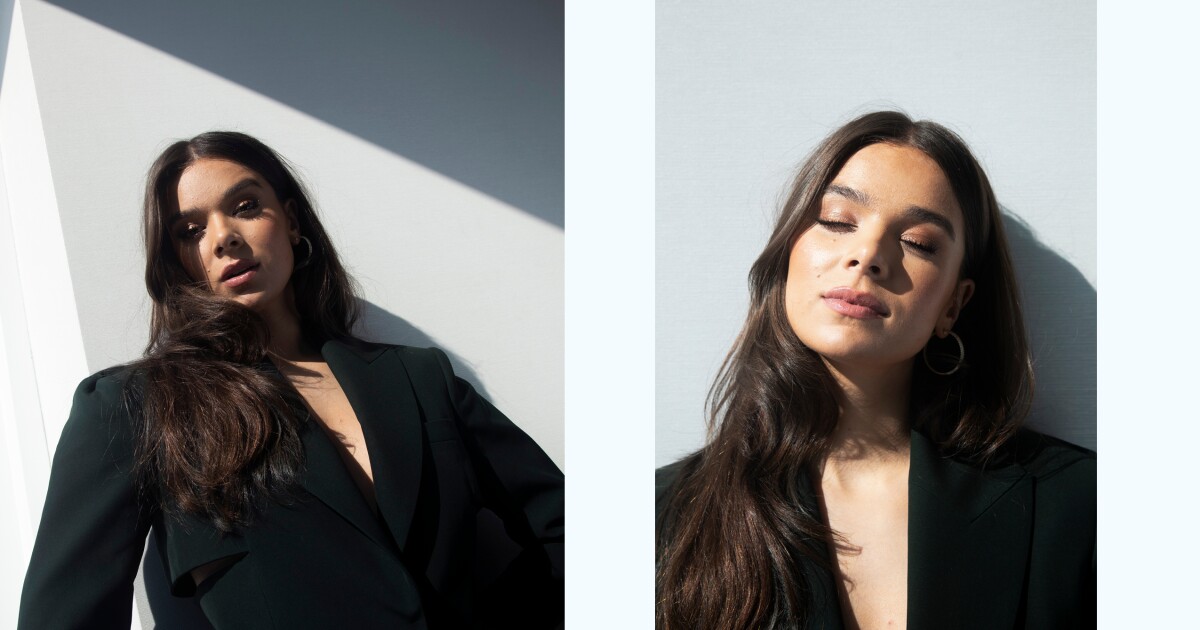 Why Hailee Steinfeld lost sleep over ‘Dickinson’ on Apple TV+

Those are the roles Hailee Steinfeld has grown into on screen since her first feature film, when she was nominated at age 14 for an Oscar for her portrayal of the sharp-witted Mattie Ross in the Coen brothers’ “True Grit.” She‘s died as a star-crossed lover in an adaptation of “Romeo and Juliet,” romped alongside giant Transformers in the sci-fi film “Bumblebee” and immersed herself in the dark coming-of-age comedy “The Edge of Seventeen.” On Steinfeld’s soaring trajectory, no two girls, teens or women are alike.

Now 19th century poet Emily Dickinson comes alive through Steinfeld in the third and final season of the quirky period dramedy “Dickinson,” premiering Friday on Apple TV+. A daring look at the poet in her formative 20s, the final installment of the ambitious series marks the end of a unique production about an enigmatic American icon.

“I probably wouldn’t have understood the depth of Emily, her work or her story without the series, so I’m grateful to this show for serving as an introduction to her. I hope that it does that for others,” said Steinfeld, who also serves as an executive producer on the series.

Along with “Dickinson” creator Alena Smith, Steinfeld spoke about the challenges of bringing the beloved poet to life, what prepared her for the role and what lies ahead for the 24-year-old actor and singer from Tarzana — namely her leap into the Marvel Cinematic Universe as the avenging archer Kate Bishop in the Disney+ superhero series “Hawkeye.”

Hailee Steinfeld: Going from a corset to a superhero suit, not so different.

There are heroic elements to both women.

Steinfeld: With something like “Hawkeye,” where it is this epic, show-stopping, mind-blowing Marvel Cinematic Universe [production], it’s like I still can’t believe I’m in it. It’s so crazy to me. It’s so big. But the character feels so real it didn’t ever not feel that way when we were doing it. That’s something I think I’m ultimately drawn to.

The final season of “Dickinson” takes place in the middle of the Civil War, when the characters and country are faced with tragedy, hopelessness and division. Emily and her poetry become a ray of light in the darkness, so in a sense, she’s also saving the day — or at least feeding the depleted soul. That had to feel close to the bone, since all 10 episodes were shot midpandemic and within months of the Jan. 6 insurrection.

Steinfeld: I personally was feeling the hopelessness of the time. And with Emily, I felt she was in a similar situation because she’s really struggling to find how she can be of use to the the war effort — and not just the war in the country, but in her family. I was like, “In what way, shape or form can I do something?” This season served as a lesson and a reminder that Emily didn’t necessarily have to be on the front lines to help and to make change and to make a difference and to bring light into people’s world.

Emily was a private person, and what we know of her today is largely extrapolated from her writing. Did that ambiguity afford you freedom as a performer, or was it like, “Oh no, I don’t have a blueprint?”

Steinfeld: It was intimidating at first, but mostly because I was not able to personally understand the poetry. I was initially frustrated by that. I didn’t get her poems off of the first read, but I loved the fact that they kept me coming back, desperately trying to understand. … A three-line poem had me up for days. At the beginning, I was like, “This is the worst thing ever. How am I ever going to get to the bottom of this and break this down and feel connected to it?” But it kept me coming back, and I loved that. The poetry is the reason we’re able to make this show.

Alena, why did you choose Hailee for the role of Emily?

Alena Smith: She is such a phenomenal, multifaceted talent. My writing and the tone of “Dickinson” goes to a million different places. It’s a broad comedy, it can be extreme, it’s a personal family drama. There’s magical realism and crazy, almost music-video moments. Hailee can handle all of that and just go on the ride. She’s a force of nature herself, much the way that I was trying to portray Emily Dickinson. She was not supposed to be a shy, retiring, strictly period-biopic version of Emily. Hailee is really masterful, even in her young age, at being present, and that feels like a real secret to this character. Because it’s through Emily’s consciousness that the world becomes the magical place that it is.

Part of that surrealism is in the dialogue and mannerisms of the characters. They use modern slang, they throw dance parties, they hook up in the barn and go to the spa.

Steinfeld: Right, the dialogue. I loved that idea initially, but then we went to do it. … I’m in a corset that’s super tight, in this incredibly detailed and specific set and thinking, “This is weird. It’s not working.” This show is so rooted in history, so to speak so casually felt very strange. I went to Alena multiple times, and I said, “There’s got to be another version of this.” She just was like, “Trust me.” David Gordon Green, who shot our pilot, also helped us find that quirkiness in the tone of this show. … Ultimately, the poems needed to feel like a conversation and be part of her inner monologue for me to find confidence and be comfortable in that balance [with] the modernism.

Some folks were upset that the show infused these 19th century characters with contemporary attributes.

Steinfeld: It was one of the things I loved about this show when I read the first two episodes of Season 1. It was like, how fun! Who’s to say they didn’t speak like this? They got angry. They curse. Maybe they had different words or different terminology, but whatever. They were human!

Alena, did Hailee’s previous roles give you confidence that she’d nail the tricky dualism of “Dickinson”?

Smith: Hailee was 13 in “True Grit,” a period piece that was brought to life in this incredibly contemporary, bold way. She turned in a performance that felt so authentic and truthful to a contemporary coming-of-age story. And her music performances too — Hailee has swagger, and I wanted my Emily Dickinson to have swagger. That is a defining characteristic of this character, particularly in Season 1, when the world has really got her down but she just refuses to be stymied by it, and she’s basically telling everybody things that they don’t know how to handle and what to do with. It wasn’t a part for a delicate flower. I needed somebody with fire and charisma and power.

Steinfeld: When I auditioned for the Coen brothers, I had been preparing myself for weeks. I really dug in while I could in the hopes of getting called back. I had auditioned twice before I read and went in with the utmost determination and willpower. But as I was doing the scene that was rather serious, these two were laughing. And I’m thinking to myself, this is not supposed to be funny. I remember looking back, at a point when I was old enough to understand where the humor comes from, and a lot of it is in the tragedy of the situation or the circumstance. It was a moment where I was like, “Wow, I guess I just have, like, comedic timing.”

But you’re also a pop star in your own right, from the “Pitch Perfect” franchise to two EPs of your own to appearing in videos with the likes of Taylor Swift and Kendrick Lamar.

Steinfeld: Singing has always been a thing. Like most 7-year-olds, I couldn’t really sink my teeth into anything longer than a few weeks. I would wake up one day, and it was ballet. I’d wake up a month later, it was basketball, then horseback riding. My parents were always so lovely and supportive. They would buy the lessons and the gear and get me all set up, and that was what it was — until it wasn’t. They probably thought it was a mistake when they bought me an amplifier and a microphone. We had this mirror at the bottom of their staircase and a conveniently placed outlet, so I would plug it in and sing in front of the mirror. It was the idea of entertaining and being a performer that was of interest to me. Then I had a cousin who was in commercials, and I was like, “I want to be in commercials!” And from there it went.

Steinfeld: [An ad] for those dolls, the Soda Pop Girls. Yeah, that was a big day for me. I did a few Kmart commercials, which got me through my next year of acting classes. And I can’t remember the other one. … I’ll have to ask my mom.

Alena, what do you want for Hailee’s future?

Smith: I don’t think that there are many actors of her generation who have the level of talent that she has. I really hope that she is recognized for that because it’s astounding. For a young woman to be performing at that level, we should be noticing her in the same way that we would be noticing a young Matt Damon or Adam Driver. She’s doing things that are extremely hard, and she’s pulling them off so beautifully. I want people to see that and for her to be recognized for that.

Hailee, do you know what comes next?

Steinfeld: It’s rare that I know what I’m doing before doing it. And if I do, I’m not looking at the next 10 years of my life. It’s one step at a time. I’ve had moments in my career where I have felt like, “Oh, my God, I must be doing something right, this is what makes me happy!” I have moments where I’m on set, where I’m in the middle of a magic take that’s so wonderful that I can’t even describe what happened that day. It’s wild and feels unpredictable, inconsistent. But to chase those moments doesn’t make sense. … I think life is a series of small victories, and I love to acknowledge those if and when I can, whether it’s for me or people around me. But on the flip side, I’ve had moments of like, “Wow, I need to reconsider,” because, much like anything else, it gets to be overwhelming. But I do ultimately feel like I’m in the right place, and I thank God that I landed on something I love.

When: Any time, Season 3 starts Friday

Rating: TV-14 (may be unsuitable for children under the age of 14)

Previous Today’s Headlines: Newsom’s a vaccine champion — except in this case
Next USC vs. Arizona State matchups: How will Trojans use QBs?