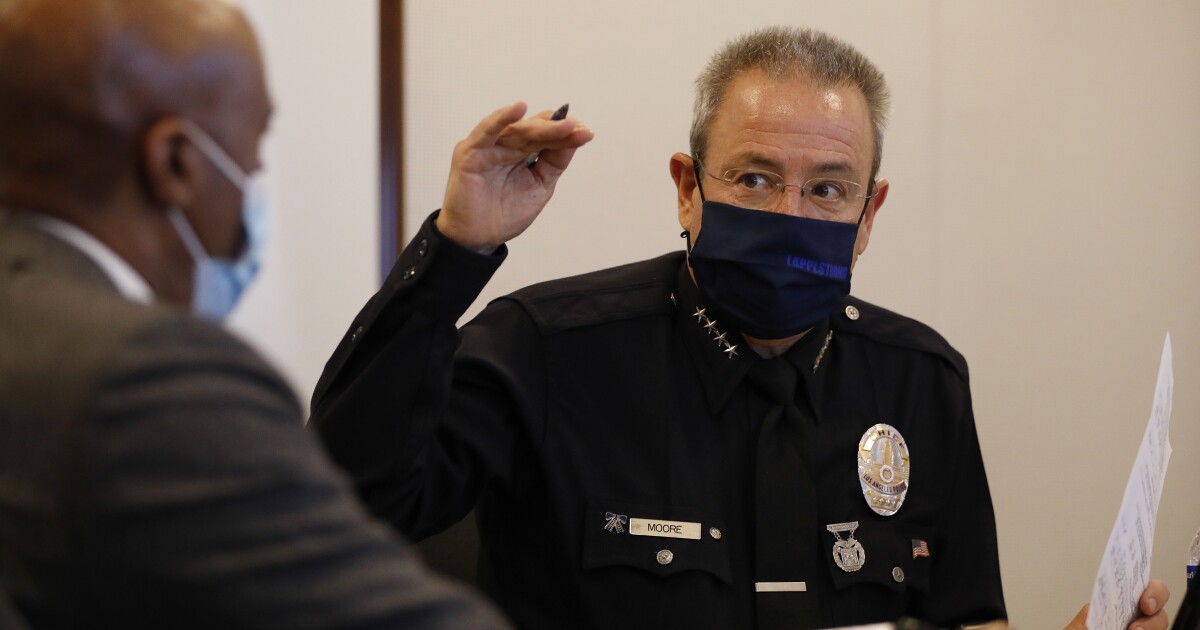 About 78% of Los Angeles police personnel have now received at least one COVID-19 vaccination dose, with 172 LAPD employees receiving their first dose just in the last week, officials said Tuesday.

The increase came as police supervisors began hand-delivering notices to unvaccinated LAPD employees informing them that they must start paying for regular COVID-19 testing and be vaccinated by Dec. 18 unless they receive a medical or religious exemption.

Officials had been concerned that a large number of officers would refuse to sign those notices, resulting in their being sidelined pending a disciplinary process to terminate their employment, but so far that hasn’t happened.

Of 2,158 notices served to unvaccinated employees in recent days, just three — two sworn officers and one civilian employee — refused to sign off on the notices, leading them to be assigned home pending disciplinary hearings, LAPD Chief Michel Moore told the civilian Police Commission on Tuesday morning.

In total, Moore said that nearly 3,600 of the more than 12,100 LAPD employees were due to receive a notice, including 2,239 employees who have sought an exemption, and that 60% of them had been served as of Tuesday. Moore said the department was working to reach the other 40% as quickly as possible, though many of them are on leave and not currently reporting for duty.

“The desire will be to have all those notices served forthwith,” Moore said.

Moore and several members of the commission touted the increase in the overall vaccination rate on Tuesday as progress toward the department’s ultimate goal of a fully vaccinated workforce.

“We are taking strides — not steps, but strides — in the right direction,” said Commission President William Briggs, a prominent critic of vaccination resistance within the department in recent months.

Moore said 73% of the department is now fully vaccinated. That is slightly greater than the 72% of county residents 12 and older who are fully vaccinated, according to county data.

More than 3,200 LAPD employees have contracted COVID-19 since the start of the pandemic, including 13 in the last week, and 11 have died. All but one of those to contract the virus in the last week was unvaccinated, with one breakthrough case involving an employee who had previously been vaccinated, Moore said.

One LAPD employee was hospitalized with COVID-19 as of Tuesday in serious condition, Moore said.

Commission members credited Moore and other department officials with driving up the vaccination rate through efforts to educate officers about the safety and effectiveness of the vaccines and nudge them toward vaccination, including by facilitating the process with a mobile vaccination program that provides officers shots at their workplaces.

The impact of such efforts is unclear — though the mandate has certainly had an impact in driving up the vaccination rate in the department, which had plateaued prior to the city announcing the mandate and pushing ahead with plans to enforce it.