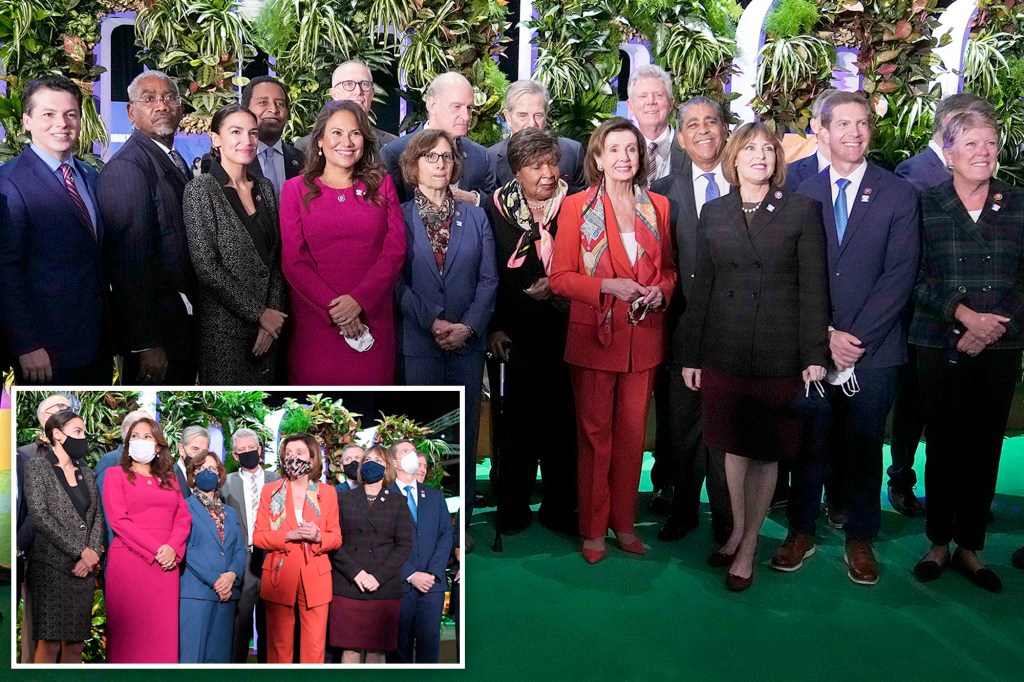 More than a dozen Democratic members of Congress, including House Speaker Nancy Pelosi, made a show of wearing masks while attending the ongoing United Nations Climate Change summit in Glasgow, Scotland, on Tuesday — until the cameras came out.

Pelosi (D-Calif.) and the other members of the delegation gathered for pictures while wearing their face coverings, then removed them in order to take at least one smiling photo.

According to the gathering’s official website, attendees are required to wear face coverings “at all times except when eating, drinking, sitting in office/meeting spaces or conducting negotiations; or if medically exempt.”

“Event speakers can also remove face coverings when delivering a speech/lecture,” the guidelines helpfully add. “Face coverings should be worn when sitting in theatre-style seating.”

In addition to the apparent rules violation, critics have charged that wearing masks after being vaccinated against COVID-19 amounts to virtue-signaling rather than being an appropriate health precaution.

The 22-member, all-Democrat delegation will “participate in bilateral meetings, panel discussions and other engagements with global leaders on top climate priorities,” according to a readout from Pelosi’s office.

“The climate crisis is the existential threat of our time, and America must continue to bring our boldest ambitions to the table to meet and beat our climate action goals,” Pelosi said in a statement. “Together with this outstanding, experienced and diverse delegation including Committee Chairs, Members of the House Select Committee on Climate Crisis and respected Members of Congress, I am honored to once again return to the United Nations Climate Change Conference to convey the strong commitment of the U.S. Congress in addressing this crisis and doing so in a way that puts justice and equity — particularly for indigenous communities — first.”

The lawmakers arrived in Scotland this week after scrambling to approve a Senate-passed bipartisan infrastructure bill and send it to President Biden’s desk. The $1.2 trillion legislation passed the House just before midnight Friday by a vote of 228-206, with 13 GOP members joining 215 Democrats to vote “yes.”

Six Democrats, including Rep. Alexandria Ocasio-Cortez (D-NY) — who joined the delegation in Glasgow — voted against the bipartisan package in an effort to gain leverage so that a sweeping $1.75 trillion social spending bill could be passed first.

On Monday, the White House revealed Biden is waiting to sign the infrastructure bill until members of Congress reconvene next week — apparently for a photo op.

“He talked about this on Saturday,” deputy press secretary Karine Jean-Pierre told reporters when asked about the delay. “He basically said he wants to make sure that the congressional members who worked very, very hard on this, when they come back, then we’ll — we’ll figure out a time to sign it. But you’re right, it’s — it’s urgent, but we also want to make sure that the people who spent the last couple of weeks, last couple of months just all in delivering on this — on this promise, are here for the signing as well,” she added.

“The United States is back to leading the fight against climate change. I’m pleased to join @ClimateEnvoy as I lead a bipartisan delegation at #COP26 where the U.S. is articulating a more robust climate policy while securing strengthened commitments from partners across the globe,” Coons said in a tweet that included a photo of him with White House climate envoy John Kerry.

Several other Republican lawmakers, including Reps. Dan Crenshaw of Texas and Garret Graves of Louisiana, are also in attendance at the summit, which ends this week.