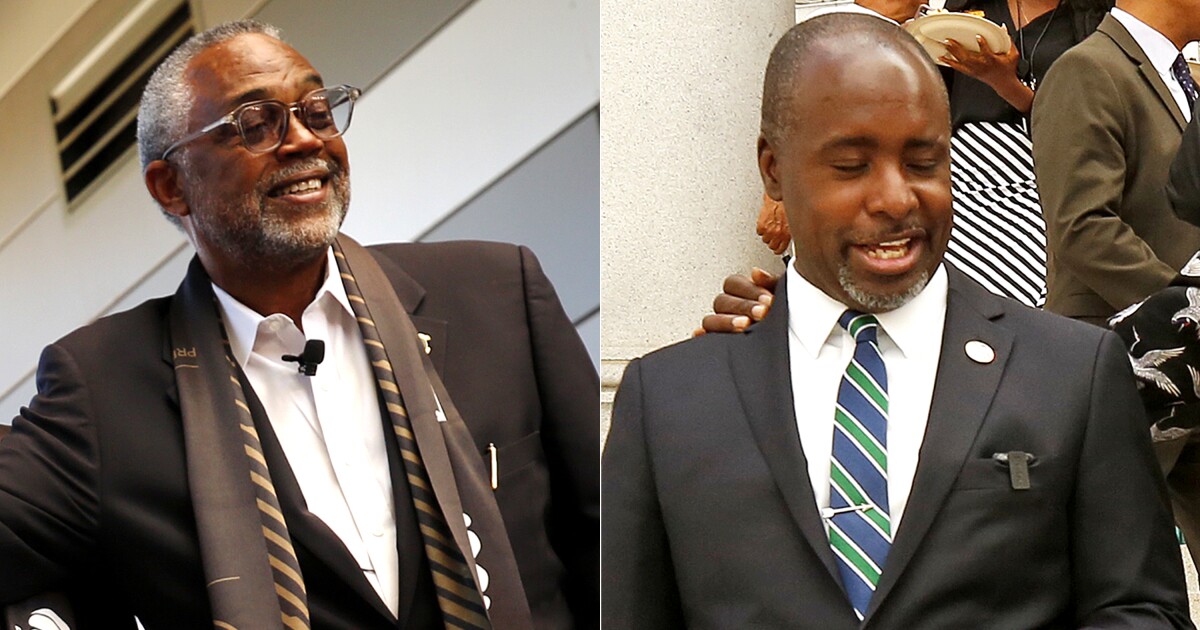 The Los Angeles City Council voted Tuesday to approve a draft set of political boundaries for its 15 members, making big changes to Councilwoman Nithya Raman’s Hollywood Hills district while keeping both USC and Exposition Park in the district represented by Councilman Curren Price.

On a 12-2 vote, council members endorsed a map that includes many of the changes recommended last month by a citizen commission. However, they reworked the commission’s plan for the San Fernando Valley, moving to ensure that districts represented by council members Nury Martinez, Bob Blumenfield and Paul Krekorian remain largely as-is.

The council’s draft map will be the subject of two state-required hearings — one on Wednesday, the other Nov. 23 — before coming back for a vote on Dec. 1. On that day, the council will have an ordinance to put the changes into effect.

On Tuesday, the single most contentious issue involved Exposition Park, an area in South Los Angeles that takes in such institutions as the Los Angeles Memorial Coliseum, Banc of California Stadium and the California African American Museum.

Ten years ago, the council — then led by Councilman Herb Wesson — approved a redistricting map that moved Exposition Park and nearby USC out of the 8th District, which is now represented by Councilman Marqueece Harris-Dawson.

Harris-Dawson, whose district has the city’s largest concentration of Black voting-age residents, asked his colleagues to restore Exposition Park to his district. That would mean pulling Exposition Park out of the district represented by Councilman Curren Price.

Only three council members voted yes — Harris-Dawson, Raman and Mike Bonin. After the meeting, Harris-Dawson called the council’s decision “a travesty” and said he intends to keep fighting for Exposition Park.

The 8th District, he said, needs assets like Exposition Park to bring benefits to local communities and serve as a catalyst for economic development.

“I’m going to continue to appeal to the conscience of my colleagues,” he said in an interview. “I think that there’s more I can do to dramatize the importance of this issue and how deeply felt it is in Black Los Angeles.”

Price, for his part, said he was pleased with the outcome, describing Exposition Park and USC as crucial for his district, which stretches from Staples Center in downtown Los Angeles south to 95th Street. The district, which takes in neighborhoods on the eastern end of South Los Angeles, is heavily Latino and considered the most impoverished in the city.

“People [in the district] have a vested interest in Expo Park. We’ve done a lot of work there, created new jobs,” he said. “So it’s an economic engine.”

The city redraws its district boundaries once a decade, following the release of U.S. Census data. Under the law, each district must have roughly the same population — in L.A. , about 260,000 people per district. The map must adhere to the federal Voting Rights Act, which ensures opportunities for Black and Latino political representation.

Tuesday’s vote came roughly a year after city leaders formed a 21-member citizens commission to draw a new set of lines. The commission’s proposal accomplished several goals, such as ensuring that 5.7 districts are located in the Valley and that Koreatown has a single representative on the council.

The commission’s proposal drew an outcry from many of the Valley’s community groups and neighborhood councils, who said it left too many residents with a new council member and moved key economic assets from one district to another.

Martinez, the council president, pushed for a “hybrid” map to address those concerns. Under the council’s plan, her district would regain Van Nuys Airport and the Sepulveda Basin recreation area; Blumenfield would get back Canoga Park and Winnetka; and Krekorian would be assured that his district remains in the east Valley, taking in such neighborhoods as North Hollywood.

The biggest batch of changes were imposed in Raman’s district, which lost Hancock Park, Miracle Mile, Park La Brea and a section of Mid-City. In exchange, her district pushed deeper into the Valley, reaching as far west as Reseda.

Raman succeeded Tuesday in persuading the council to restore small sections of her district, including part of Silver Lake and Hollywood. Nevertheless, she voted no on the overall map.

Richard Close, president of the Sherman Oaks Homeowners Assn., which is based in Raman’s district, said his group is happy with the new boundaries. Close said the plan accomplished the goals of his organization: keeping Sherman Oaks in a single district, one that has about two-thirds of its population based in the Valley.

Those numbers will make it easier to elect a sixth council member who resides in the Valley in the future, he said.

“Based upon our population, [the Valley] should have 5.68% Valley districts,” he said. “And this map gives us that percentage.”