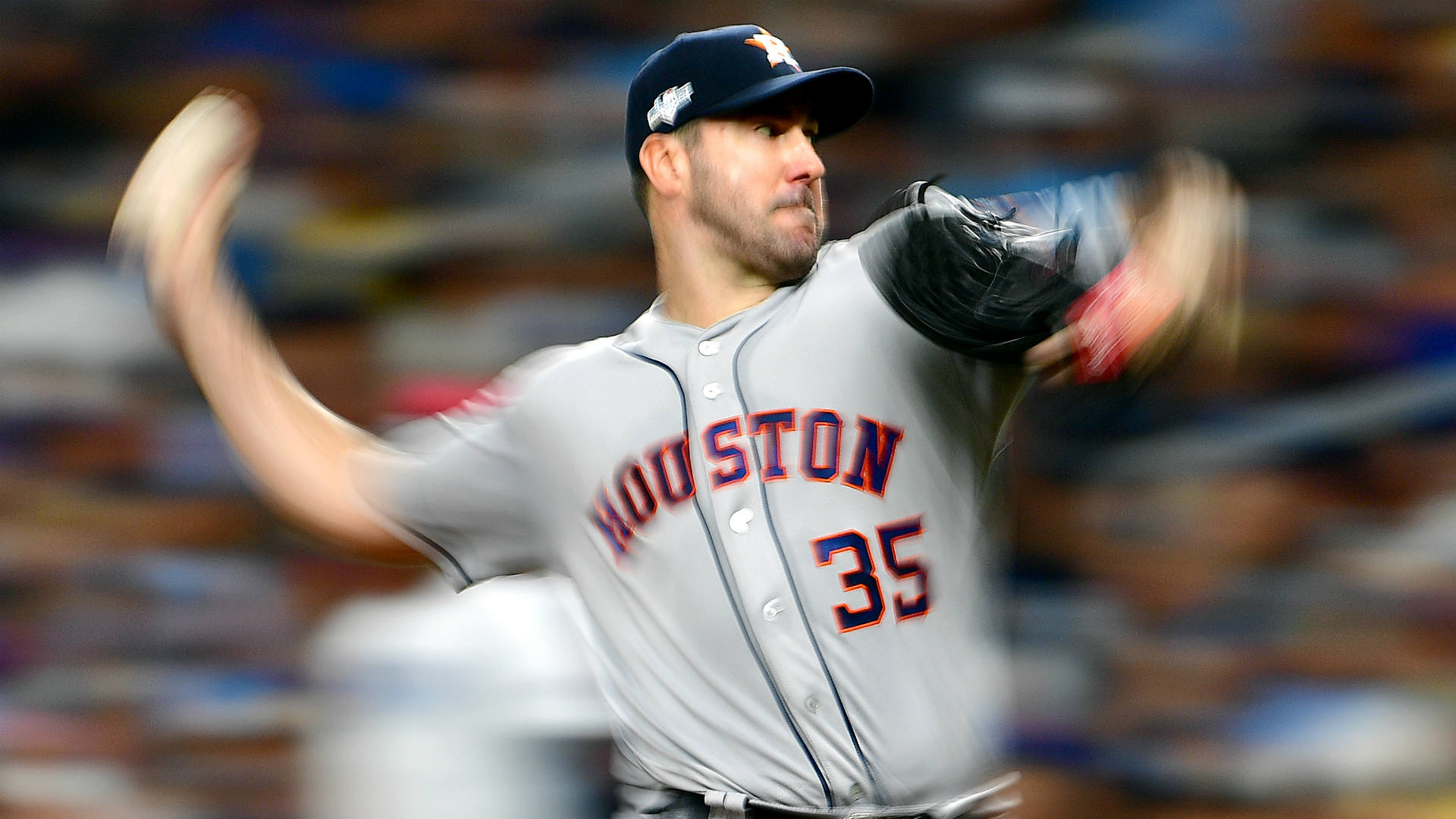 Even before Justin Verlander’s 25-pitch session on Monday in Florida in front of scouts representing 15-20 teams, the Astros had extended the veteran right-hander a qualifying offer for the 2022 season: one year at $18.4 million.

That’s how much they believed in his ability to return to form next year in what will be his Age 39 season, 17 months removed from Tommy John surgery.

The session, safe to say, went well. He reportedly threw between 94 and 97 mph, leaving those in attendance with a very positive impression.

One scout that attended Justin Verlander’s workout today in Florida offered a succinct summation of what they saw: “He’s ready.”

So where will Verlander sign, after he rejects the qualifying offer (which he will)?

Instead of trying to guess what’s in Verlander’s plans, let’s instead take a look at which teams need a start of the caliber of Verlander — assuming he’s healthy, and there’s every reason to believe he is — to plug in near the top of their rotation. And, yeah, every team would benefit with a healthy Verlander, of course, but we’re only looking at teams that need Verlander to contend for something in October (sorry, Rangers).

The greater the rotation need and the closer the team is to an October breakthrough — be it getting into the playoffs or actually winning the World Series — the higher they rank.

The need: The Yankees’ 2022 rotation options at the moment consist of perennial Cy Young candidate Gerrit Cole and about eight or nine pitchers who seem likely to post an ERA in the 4s if given 25 to 30 starts. That’s not good enough, and upgrades will certainly be made this offseason after the Yankees failed to reach the World Series for the 12th year in a row in 2021. They won the World Series in 2009, and longtime owner George Steinbrenner died in July 2010; the Yankees haven’t been back to the World Series since.

Pair Verlander with Cole atop the rotation, though? Remember 2019, when those two finished 1-2 in the AL Cy Young race as teammates in Houston? You can bet the Yankees — who lost to those Astros in the ALCS — remember the duo well.

The need: As we described this summer, the Tigers are a franchise on the rise, and they’ve been making noise about spending money this offseason for quite a while. What better addition than Verlander? He fits dual roles, of a potentially dominant veteran starter atop a rotation with youngsters such as Casey Mize, and he also scratches that nostalgia itch for fans who watched a young Verlander develop into a potential Hall of Famer.

It’s almost too perfect, to be honest.

The need: The Giants’ situation so far this offseason: Everybody’s a free agent and Buster Posey retired. Not ideal. But this is a team that spent every single day during the regular season exceeding expectations, and there’s no reason to believe they’ll drop from 107 wins to .500 in 2022. They have a ton of payroll flexibility and signing Verlander to a short-term deal would be a great start to building the rotation around Logan Webb.

The need: Who knows what the L.A. rotation looks like in 2022? At the moment, there are only two pitchers we know will be in the rotation (barring an injury between now and then): Walker Buehler and Julio Urias. Clayton Kershaw and Max Scherzer are free agents, and though Trevor Bauer is under contract it seems highly unlikely he’ll ever pitch for the club again. Dustin May should be back for the stretch run, but not to start the season. Verlander makes as much sense as anyone, and the Dodgers aren’t afraid to bring in star power.

MORE: What’s next for Clayton Kershaw?

The need: You might remember that the Padres spent the first four months of the season in the conversation about World Series contenders and then wound up giving four starts each to Jake Arrieta (10.95 ERA) and Vince Velasquez (8.53 ERA) down the stretch after they were cut loose by other teams. So, yeah, the Padres could use a bit of rotation stabilization.

On paper, the 2022 starting five looks solid: Yu Darvish, Blake Snell, Joe Musgrove, Chris Paddack and Mike Clevinger, who missed 2021 after Tommy John surgery in November 2020 but should be ready to go next season. But a healthy Verlander’s an upgrade on every one of those players, and GM A.J. Preller isn’t going into the 2022 season with anything less than a plethora of top-of-the-rotation starting pitching options.

The need: Verlander might not be No. 1 on their list, but the Jays have starting pitching needs, plural. Robbie Ray, who probably will win the AL Cy Young award, and Steven Matz, who made 29 starts for the club, are both free agents. Bring one of those two back on a longer deal and Verlander in on a shorter deal, to go with Alex Manoah, Jose Berrios and Hyun-Jin Ryu, and you probably would be looking at the rotation of the AL East favorites.

The need: President of baseball operations John Mozeliak told the St. Louis Post-Dispatch that pitching is a priority this offseason, with good reason. The Cardinals had five Gold Glove winners in 2021 — and a pretty decent catcher behind the plate in Yadier Molina — but only two starters on the roster who made at least 15 starts in 2021: Adam Wainwright and Jack Flaherty. Miles Mikolas returned from injury and made nine starts, and the club expects Dakota Hudson, who returned from Tommy John and pitched 8 2/3 innings at the end of the year, back in the rotation.

There are other options to fill out the rotation, but none with the upside of Verlander. The team had a ton of money come off the books after the season, and the short-length, high-AAV contract is something they could certainly make happen. And the 39-year-old Verlander would make a nice offseason present for 35-year-old manager Oliver Marmol.

The need: Boston has options, no doubt. Chris Sale is healthy and back in the rotation, alongside Nathan Eovaldi. Tanner Houck sure looked like a future rotation stalwart as a rookie and Nick Pivetta is solid at the back end of the rotation. The Sox could bring back free agent Eduardo Rodriguez or give Garrett Whitlock a shot this spring as a starter. But adding a healthy Verlander to that mix? That could take the rotation from “good enough to win games with that stellar offense” to “good enough to win lots of low-scoring games,” which is always the goal.

The need: The Angels always need pitching. Always. Maybe Verlander (and a couple of more additions) finally helps the Halos get Mike Trout into October?

The need: Yeah, the Mets absolutely need Verlander — especially if both Marcus Stroman and Noah Syndergaard leave — and could pay him whatever he wants. But how many free agents with as many options as Verlander are going to choose to walk into that situation? That’s not a dig, it’s a legitimate question.

MORE: The A’s would be foolish to not hire Ron Washington as manager

The need: The Mariners hope to build on 2021 and finally end their playoff drought in 2022. What better way to do that than bringing in Verlander, a veteran who has won a World Series championship and still can be a dominant force on the mound?

The need: Sure, the Braves proved you can win a World Series with only two starting pitchers, but maybe that’s not a solid strategy for a 162-game season, eh? Atlanta has Max Fried, Charlie Morton and Ian Anderson locked into the rotation for 2022, and the hope is that Mike Soroka will finally be back and healthy for spring training. And even if they don’t get Verlander or another starter this offseason, Kyle Wright sure looked like a potential rotation option for 2022 during the World Series and Huascar Ynoa threw well in his full-time rotation audition last season before injuries became an issue.

The need: The Astros would love to have him back, which is why they extended the qualifying offer. But they got to the World Series just fine without him and might have won it all had Lance McCullers Jr. not gotten hurt. Zack Greinke probably leaves as a free agent, but Cristian Javier slides into his spot. As we’ve said with several of these teams, though, if the goal is to win a World Series, bringing Verlander in as a rotation upgrade fits the “need” category.