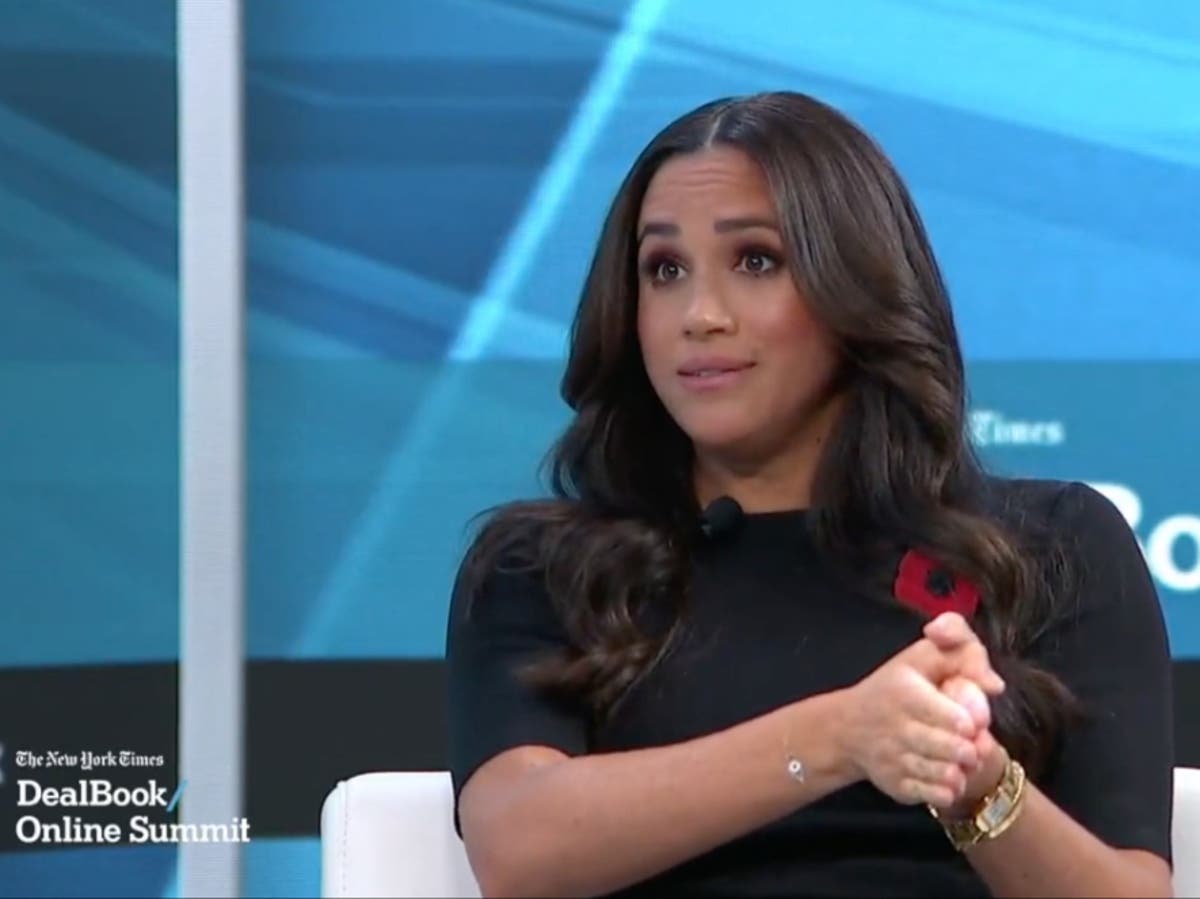 Meghan Markle has revealed her belief that tabloids should “come with a warning label like cigarettes do” while reflecting on the downsides of such publications.

The Duchess of Sussex shared her thoughts on tabloids during an appearance at The New York Times DealBook Online Summit on Tuesday, where she participated in a conversation called: “Minding the Gap” with Mellody Hobson, co-CEO and president of Ariel Investments, about the ways that women can reach economic and professional parity.

At one point during the conversation, the duchess was asked by host Andrew Ross Sorkin, editor at large and founder of DealBook The New York Times, about what she is like as a boss of her and Prince Harry’s company Archewell.

While inquiring about Meghan’s role, Sorkin noted that he has “read great things about you as a boss, and if you read the tabloids, you can read all sorts of crazy things”.

In response to the question, Meghan began by urging Sorkin not to read tabloids, as she claimed that the publications are “toxic for your mental health”.

“Well, first I would urge you not to read tabloids, because I don’t think that that’s healthy for anyone. Hopefully one day they come with a warning label like cigarettes do, like ‘this is toxic for your mental health,’” Meghan said.

As for how she is handling her role in Archewell, the duchess said she and Prince Harry are “just doing it the same way that we would want if we were employees of it,” adding that they follow the mantra “treat people the way you want to be treated”.

During the conversation, Meghan also spoke of the media’s role in “clickbait culture,” and how social media has made it a “race to the bottom”.

“This clickbait culture has made it so that something that is salacious is more interesting and gets more pick up and can be monetised, so that ends up being the thing that feeds the entire environment of the media,” Meghan said.

According to Meghan, the issue stems, in part, from the fast environment of the news cycle, with the duchess claiming that “it’s about creating the news rather than reporting the news,” and that the “damaging effects of that specifically for women, and especially for young girls, is impossible to even quantify”.

Elsewhere in the conversation, Sorkin asked Meghan about Associated Newspapers’ decision to appeal after the duchess sued and won a case against the Mail on Sunday for publishing parts of a letter she wrote to her father Thomas Markle in 2018.

In response to the question, Meghan said: “In terms of the appeal, I won the case. And this issue, frankly, has been going on since I had no children at all … I now have two children. It’s an arduous process, but again, it’s just me standing up for what’s right, which I think is important across the board.”

Despite her often-tumultuous relationship with the media, and her previous struggles with mental health, Meghan had a positive response when Sorkin asked whether she was feeling “better about everything”.

“You said mental health, and there was a moment where a lot of the world was asking the question,” he said, to which Meghan said: “Yes, I am feeling much better about everything.”

Meghan appeared at the summit on the same day that her husband appeared on a “Re:Wired” panel, where he claimed that he predicted the 6 January Capitol riot.

Previous Live: If You Can Make It There, the Mets Would Love to Have Your Number
Next Turkish Chef Makes Fryums On Huge Skillet In Desert, 98 Million Views For Video