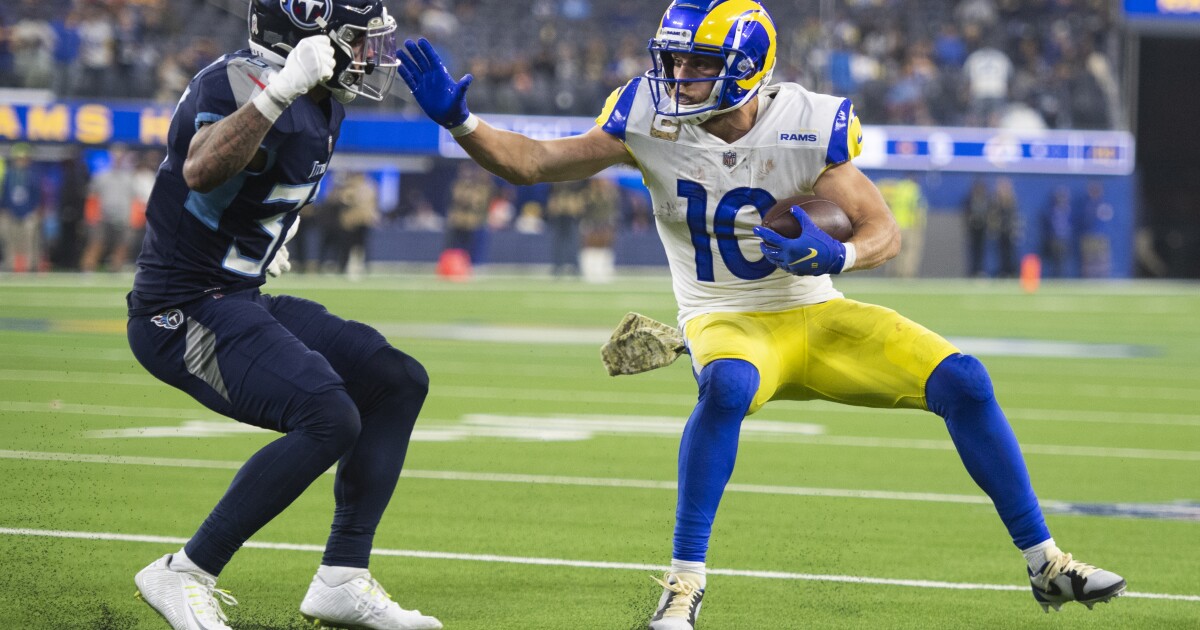 The father of star Rams receiver Cooper Kupp got some bad news recently.

His buddies in a fantasy football league aren’t going to step aside anymore and give him a free pass to select his son.

“They’ve already warned me,” Craig Kupp said with a laugh. “They’re not just going let me draft Cooper. Those days are over.

“They say I’m riding him for every win that I’ve got.”

Fair enough. Kupp is a scoring machine, both on the field and in fantasy. Despite a disappointing performance by the Rams in their Sunday night loss to Tennessee, Kupp had 11 catches for 95 yards. For the season, he has 74 receptions for 1,019 yards and 10 touchdowns, making him the second player in the Super Bowl era with at least 1,000 yards receiving and 10 touchdowns in the first nine games of a season. The only other player to achieve that is Jerry Rice, widely regarded as the best receiver ever.

“I always take a running back first,” said Craig Kupp, who calls his team “Wide Load” in reference to his broad posterior. “I took [Minnesota’s] Dalvin Cook.”

That could make things interesting the day after Christmas when the Rams play at the Vikings.

Cooper participated Monday in the “Taste of the Rams,” a virtual event for charity on behalf of the Los Angeles Regional Food Bank, and was asked by host Andrew Siciliano about the fantasy revolt.

The receiver had a tongue-in-cheek response.

“I was actually kind of disappointed to hear about this because we pride ourselves on being competitive,” Kupp said. “For my dad to take advantage and not allow this to be something … a draft’s a draft, just let it play out. And my brothers are in the draft, too, so I don’t know why my dad gets dibs.”

Craig Kupp was a 6-foot-5 quarterback for Pacific Lutheran University in Tacoma, Wash., a fifth-round pick of the New York Giants and played briefly for the Phoenix Cardinals and Dallas Cowboys. His father, Jake Kupp, was an NFL offensive lineman who blocked for Archie Manning in New Orleans.

Cooper Kupp put up big numbers as a receiver at Eastern Washington and had some of his best games against Pac-12 opponents, but it was working as a counselor at the Manning Passing Academy that he first caught the eye of Rams general manager Les Snead.

Kupp spent five summers as a counselor at that camp in Thibodeaux, La., a rare receiver in a sea of college quarterbacks. There, Peyton Manning staked a claim to him as his personal receiver for a passing exhibition. Snead, who was in attendance, took note of that.

“Peyton mentioned to [his brother] Eli, and all the subsequent college QBs, ‘Hey, Cooper Kupp’s my guy. Y’all can figure out who y’all are throwing to, but Cooper’s mine,’ ” Snead told the Los Angeles Times in 2019. “At that point, you took the note to follow the kid. Because Peyton’s a perfectionist, and he was definitely going to have someone who was going to be where they were supposed to be, and make the catch when he was supposed to make it.”

Recalled Peyton Manning: “Eli and I would argue over who got to throw to Cooper, because all of his routes were very precise. He had great control of his body. You always knew where he was going, when he was going to break out or break in. For a quarterback and receiver, sometimes it takes awhile to develop that timing. But he was one of those guys who right away for me and Eli the timing was easy. And of course he caught everything as well.”

No word on Manning’s fantasy lineup.

Previous Brian Williams to exit NBC News and MSNBC’s “The 11th Hour”
Next India News | Madhya Pradesh: BJP MLA Alleges Collector Not Meeting Him as He is Dalit, Stages Sit-in Outside His Bungalow